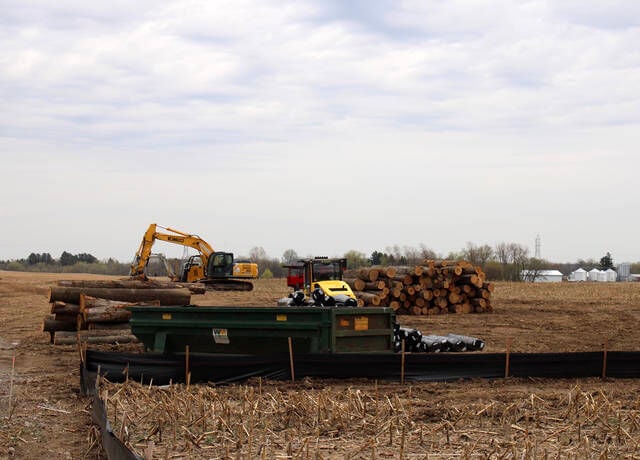 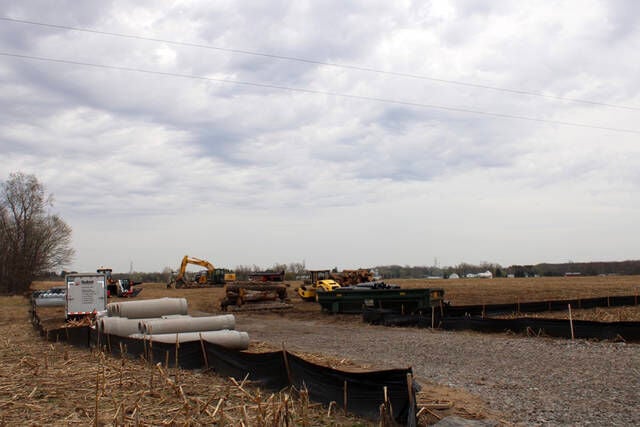 CALEDONIA TWP. — After years of planning and despite pushback from nearby subdivision residents, the $30-million Lyons Road Solar Project is finally starting to take shape — albeit with a different developer leading the way.

Once complete, the project with generate about 20 megawatts of electricity, enough to power 3,600 homes, according to Tami von Isakovics, PGR director of communications and marketing.

“Our development team is very excited to see construction begin and the landowners who are hosting the solar farm are also excited,” von Isakovics said Friday, adding the company will work to “ensure Lyons Road Solar operates properly over its useful life while remaining a quiet, minimally visible member of the community for decades to come.”

Crews began preliminary work at the site in December 2020; weather delayed full mobilization until the end of March this year. The project will take about 30 weeks to finish, with expected completion in December 2021, according to von Isakovics.

The solar development will be constructed on property leased from two different landowners. The property extends from Cornell Road south to Lyons Road and will abut the Crestview subdivision along the northeast corner of the project.

While the size and scope of the project remains the same, slight alterations will increase the buffer from neighboring households. The initial buffer proposed by Renergetica, or perceived lack thereof, was a primary concern among area residents throughout the approval process.

“Due to (the acquisition of) higher-efficiency panels we were able to engineer the racking/module locations to avoid placing them in the northeast corner of the property, providing a larger buffer away from the (Crestview) neighborhood to the east of the project,” von Isakovics said, adding the company will also plant a vegetative buffer around the perimeter of the project to make it more visually appealing for surrounding residents.

Renergetica received both its special use permit and site plan approval from the township planning commission May 2, 2019. The project was expected to go before the township board, but Crestview resident Eric Weber and his fellow neighbors chipped in to cover the $600 non-refundable administrative fee for an appeal of the site plan approval.

In the residents’ appeal of Renergetica’s site plan, five main areas of concern were outlined, including the perceived inadequacy of the glare analysis, the potential for pollution, the positioning of inverters, what residents believed was an ineffective decommissioning plan and the lack of an adequate visual barrier.

Weber, speaking on behalf of his neighbors during an August 2019 zoning board of appeals (ZBA) meeting, said the company’s $300,000 decommissioning plan was simply not adequate with respect to covering the cost of a full-scale removal and cleanup.

“I think it’s really important that the township protects itself, the leasing landowners and all the township citizens from any potential liability in the future,” Weber said at the time. “Today’s dollars are not dollars 35 years from now, we all know that. We don’t want to be left at the end when the third owner of this solar farm, because it’s quite possible that it’ll change hands multiple times, just decides to say I’m cutting my losses.”

The ZBA subsequently required Renergetica to seek out an impartial third party to complete a cost estimate for the project’s removal. Bierlein Company, of Midland, conducted the independent study, generating a proposed decommissioning cost of roughly $389,000.

ZBA members opted to give the project the final OK in November 2019, approving a decommissioning cost of $389,020, plus 25 percent, bringing the total cost of decommissioning to roughly $486,300. Representatives from Renergetica were not present at the November 2019 meeting, and asked the ZBA to reconsider the increased cost.

Pine Gate Renewables eventually posted a decommissioning bond for $411,275, which will be in place for the entire lifetime of the system, approximately 40 years, according to von Isakovics.

To date, Pine Gate Renewables has contracted 40 projects with Consumers Energy in Michigan through long-term, bilateral agreements. The first 14 of those developments went online in late 2020 and early this year.

Pine Gate Renewables manages 760 megawatts of operational assets nationwide, the company said, and has more than 10 gigawatts in active development and has raised more than $2 billion in project capital to date.