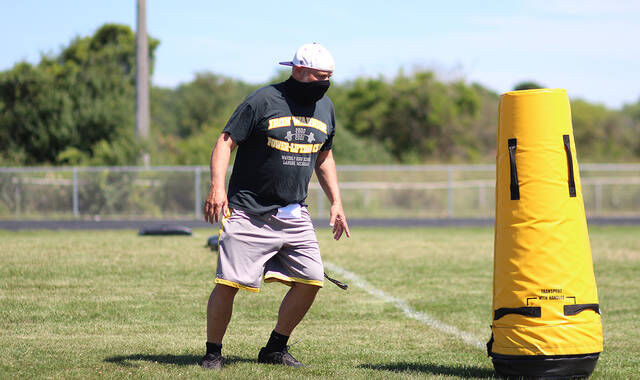 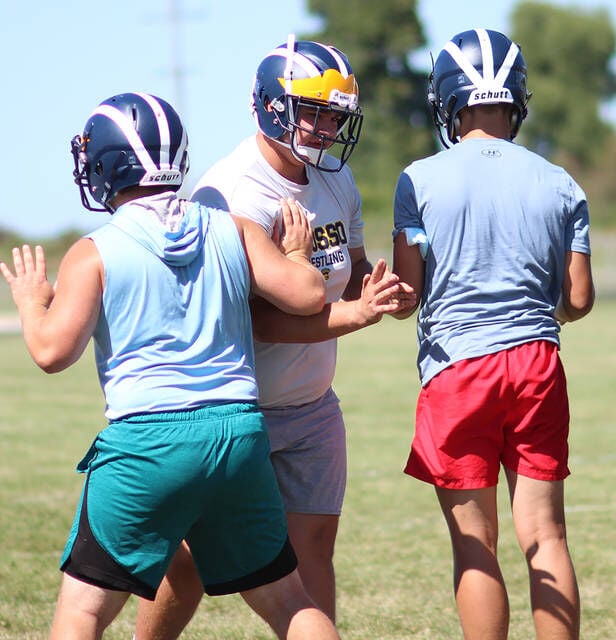 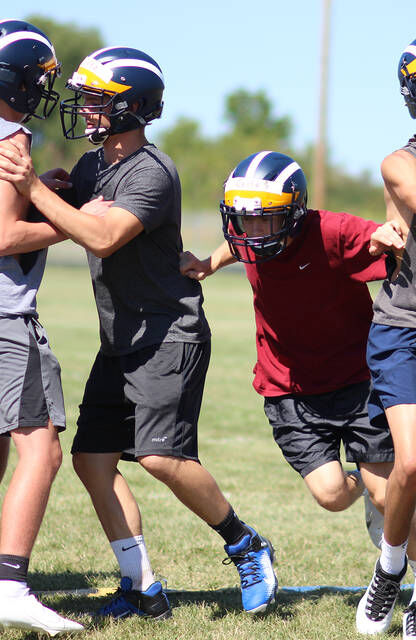 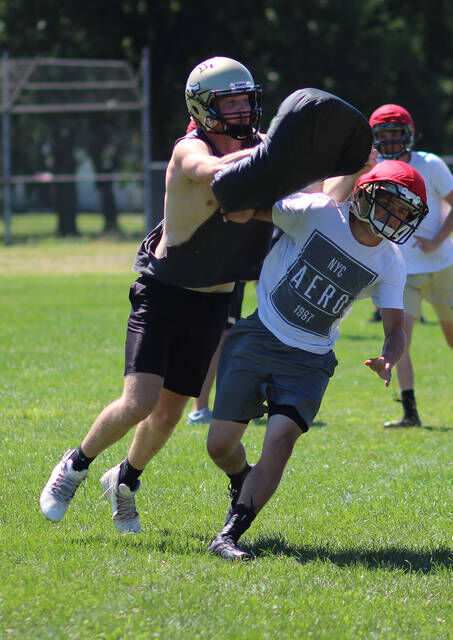 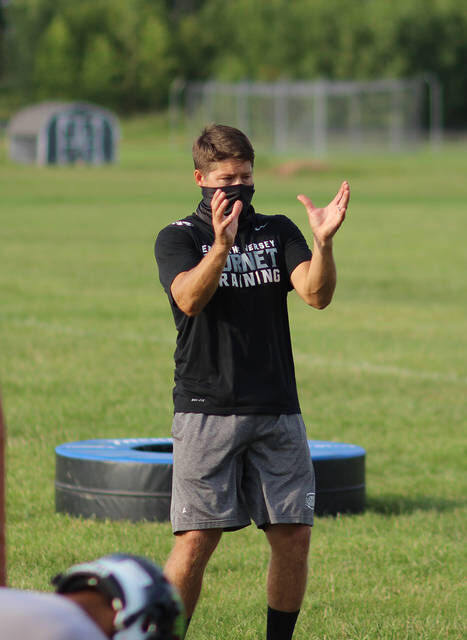 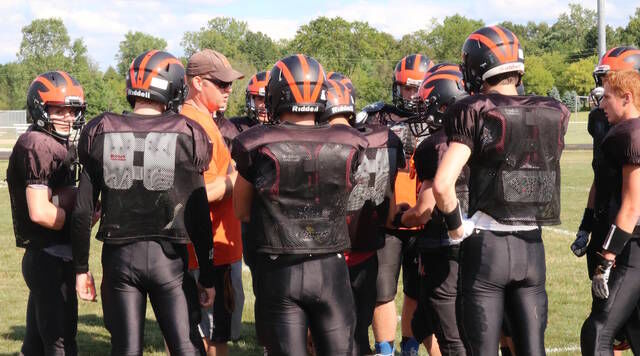 Morrice coach Kendall Crockett (in baseball hat) talks to his team before a four-way scrimmage in 2019 at Morrice High School.

Morrice coach Kendall Crockett (in baseball hat) talks to his team before a four-way scrimmage in 2019 at Morrice High School.

After completing the first week of football practice, Corunna senior Nick Steinacker was at home the afternoon of Aug. 14 when he got a text from Cavaliers head coach Kyle Robinson.

It was short: The season was over, for now.

“It was definitely a shock, considering we had a whole week of practice,” he said. “Not much you can do about it.”

After months of speculation, the Michigan High School Athletic Association pulled the plug on a fall football season, citing concerns over the ongoing COVID-19 pandemic. The MHSAA said it will instead aim for a spring start.

Owosso’s football team was on its mid-practice break when they got the news.

“What truer testament to treating every day like it’s your last can you really have, because it really was,” said Owosso athletic director Dallas Lintner, who is also an assistant coach with the football team. “We have to value the opportunities that we have together.”

Morrice head coach Kendall Crockett said he was disappointed after working his team through a week of two-a-day practices.

The MHSAA said in July it would make a decision on football, volleyball, boys soccer and swimming by Thursday. MHSAA media and content coordinator Geoff Kimmerly said he believed the council made the decision to postpone football before that deadline because full contact practice was supposed to begin Monday and some members had voiced concerns over continuing to play.

“We surveyed our membership (from Aug. 13-14) and heard back from 80 percent of high schools during that time — and only 60 percent of respondents approved of moving forward with football, with many comments from that 60 percent wary of doing so even with their yes votes,” he said. “With an opportunity to move the season to spring, the council thought that to be the safest and smartest for our highest-risk fall sport.”

The Lansing School District had already announced earlier this month that it was not going to play any fall sports. The Mid-American Conference, Big Ten and Pac-12 college conferences soon followed suit, and are now aiming for a spring football season, too.

Kimmerly didn’t think those cancellations directly impacted the council’s decision — though he said the Big Ten announcement “didn’t help.” Rather, decisions to cancel fall seasons by the Michigan Interscholastic Athletic Association and the Great Lakes Intercollegiate Athletic Conference — which are home to a majority of the state’s Division II and III programs — had a much larger effect, he said.

“Those college leagues are much more ‘local’ compared to Division I conferences,” he said.

Several area teams, players and coaches had expressed a desire to play in the days leading up to the MHSAA decision. While the Trojans were disappointed, Lintner said the decision to postpone football to spring was not nearly as difficult as having to cancel spring sports entirely earlier this year.

“It was upsetting, but once you have a chance to process the bad news, it’s nowhere near as tragic as the bad news we had to deliver last spring to those seniors … without any hope for anything in the future,” he said. “At least at this point there is a hope for football players moving forward.”

What that hope will look like is anyone’s guess at this point. Football has never been played in Michigan in the early spring, when the weather is drastically different than the fall.

Steinacker said the biggest challenge from a player’s perspective is competing in weather that is not traditional for football. Lintner said snow removal and poor field conditions were his primary concerns from a facilities standpoint — and if there are spectators allowed, clearing off bleachers for seating.

“If we were to start in early March, there’s still snow on the ground,” Lintner said. “Even if there’s not snow … the month of March and even into April it’s cold, it’s snowy and if it’s neither of those things it’s a muddy mess for awhile.”

Teams in the Upper Peninsula could face an even bigger challenge as snowfall can last well into April and May. Lintner referenced a picture that circulated on social media in mid-April 2018 of Calumet High School with three lanes of the track cleared off and 7 feet of snow on the sideline.

“How are they supposed to play football in the UP?” Lintner asked. “We may have to get very creative.”

As a coach, Crockett said the biggest challenge is the fact that no one has ever played spring ball. One of his worries was getting in practice time before the season begins.

“I just don’t know what the weather is going to be; is there going to be snow on the ground? Are we going to be practicing indoors, outdoors?” he said. “Everything being up in the air like it is right now, where will it be in March? No one really knows.”

The MHSAA provided some clarity on Thursday, when it approved out-of season coaching adjustments for football. Teams will be allowed 16 contact days, to be used for “voluntary practices among students from the same school only,” the MHSAA said in a press release. Teams can schedule contact days from Monday through Oct. 31.

Football teams may also conduct skill work with coaches and up to four players at a time beginning Nov. 1 until the first day of official practice for the spring season. Coaches may also work with an unlimited number of players on general conditioning during that time.

The MHSAA said it would release an adjusted calendar that includes football in the 2021 spring season later this fall.

A hypothetical football season that begins in March will likely overlap in some way with some winter and spring sports track and basketball. Kimmerly said the MHSAA is working on minimizing overlap between seasons.

“We are looking at different concepts for fitting football into the calendar so athletes don’t have to choose which to play,” he said.

At small schools, such as Morrice, which rely heavily on multi-sport coaches and players to fill out their teams, overlapping is a big concern.

Another complication of playing in the spring is what will happen to the fall 2021 football season. MHSAA guidelines released in July allow for spring sports to finish as late as July 2021 — with the next football season scheduled to begin the next month.

That would leave little to no downtime for some athletes.

“My biggest concern for that is the kids not getting that break,” Crockett said. “I know a lot of people will probably say they’re young kids, they can handle it — well, I still think they need a break, get their minds back on track and get their bodies right.”

Lintner said he is anticipating playing a reduced schedule to avoid the seasons clashing too closely with one another. In the Flint Metro League, Owosso has five divisional opponents and Lintner said he would like to play all of them, but he can’t plan until he knows “what the parameters are.”

Crockett advocated for a nine-game schedule, but only if it can be played safely and avoid running into other sports.

“It depends on if it runs into the other seasons,” Crockett said. “If we’re not going to, I’m all for a nine-game season. Especially for schools like Morrice, where the entire football team runs track, it’s not going to work out very well.”

For now, though, football players and coaches are left to play the waiting game. Lintner said several Owosso players have already signed on to play other fall sports, like cross country and tennis, which have been cleared to play.

Steinacker said he has also heard his teammates talk about playing other sports to stay in shape. But Steinacker, who has an offer to play college football from Michigan, said ultimately he would like to hear a definitive outline of what spring football will look from the MHSAA.

“I just want to hear what their plan is,” he said.