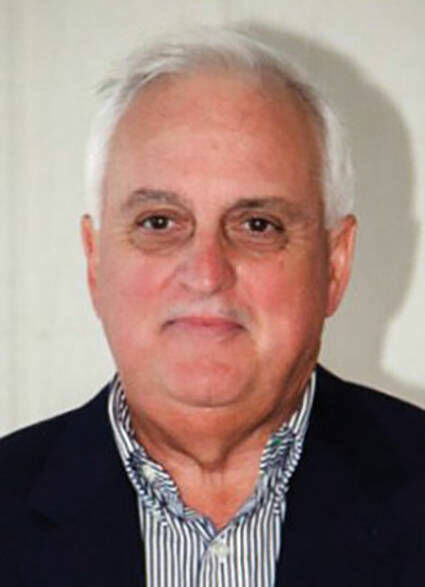 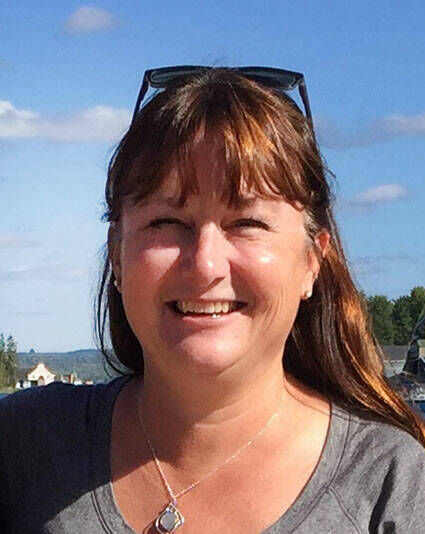 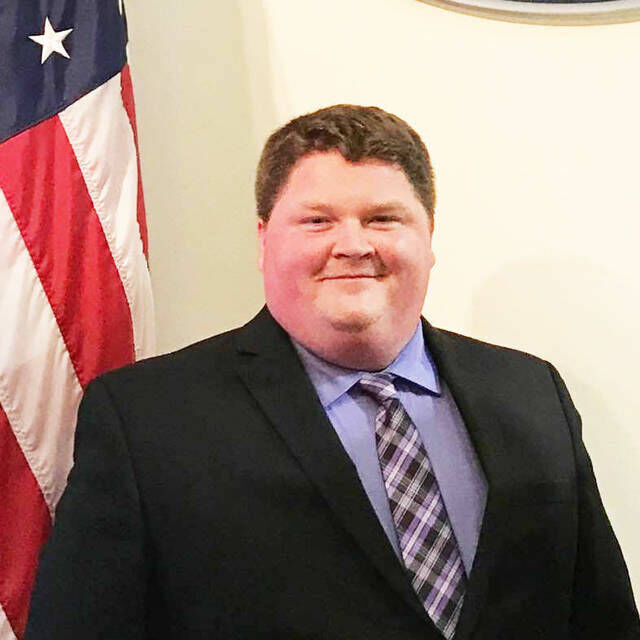 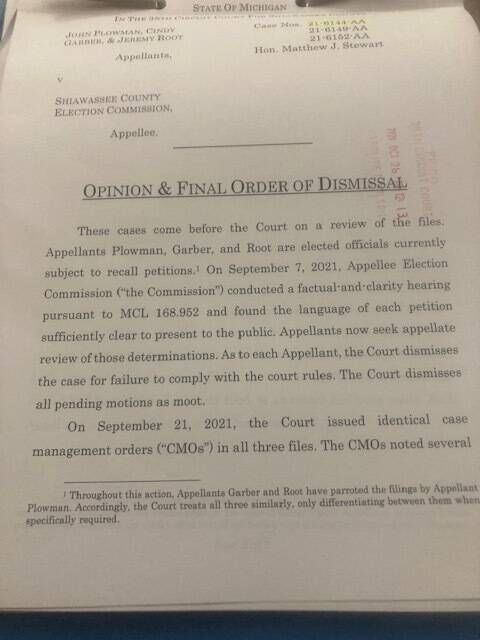 According to an order signed by Stewart and filed in Circuit Court Tuesday afternoon, the appeals by commissioners John Plowman, R-district 7, Cindy Garber, R-District 6, and Jeremy Root, R-District 5, were filled with numerous procedural errors and failed to comply with court rules. A hearing on the appeals had been scheduled for today.

Weeks after the county board voted to give itself federal COVID-19 relief money and was ordered to pay it back, several Shiawassee County residents initiated recall petitions in their respective districts against Root, Garber and Plowman. The three affected commissioners appealed the recall language, which led to Tuesday’s decision.

“I was not allowed due process,” he said. “We did everything the court asked and then some. And then not to be heard is really something. I should have the right to be heard. I was taken aback.”

Plowman said he and his attorneys are considering their appeal options.

Anthony Karhoff, who is helping organize the recalls, said he was pleased with Stewart’s decision, and that since the commissioners came under fire for voting to award themselves thousands of dollars in bonuses, residents of Shiawassee County can hold the responsible commissioners accountable.

“Public servants should be held to the highest standard of accountability,” Karhoff said. “What happened today was a milestone for Shiawassee County and all of its affected residents.”

The earliest recall elections against Root, Garber and Plowman can take place is May 2022. All current commissioners are up for re-election in November 2022.

Karhoff Tuesday repeated his call for Root, Garber and Plowman to resign from their positions as county commissioners.

“Let our county move forward and stop costing county residents money for legal costs and a recall,” Karhoff said, adding he was “100 percent certain” the recall petitions would ultimately be successful. He added he believes criminal charges will be filed against Root, Garber, Plowman, and county coordinator Brian Boggs. “They should do what’s best for our community and not their pockets … It’s like the Cookie Monster getting into the cookie jar.”

Neither Garber nor Root responded to text messages seeking comment. County Board Chairman Greg Brodeur, R-District 2, declined to comment, and reiterated he is not involved in the recall process.

Attorney Rebecca McClear, who filed a motion requesting to appear in a limited manner to handle the petition appeals for the Shiawassee County Election Commission, which approved the language of the recall initiatives, said she was happy Stewart dismissed the appeals.

“Judge Stewart has written an elegant and detailed order dismissing the case and all three appeals on procedural grounds, not on the merits,” McClear said. “Nevertheless, the result is better than what I could have hoped for when I became involved in the case.”

The push to unseat the three commissioners came after a July 15 meeting during which commissioners voted to give themselves and other county elected officials COVID-19 hazard pay bonuses using federal relief funds under the American Rescue Plan Act (ARPA). Root received $25,000; Plowman and Brandon Marks, R-District 4, received $10,000 each, and the remaining commissioners — Garber, Marlene Webster, R-District 1, Brodeur and Gary Holzhausen, R-District 3 — each received $5,000.

After the petition language was approved by the Election Commission, and the appeals filed, Wilson asked that the commission be allowed to consult the county’s attorney, as it had done previously during a recall petition clarity hearing.

However, the board voted 5-2 against adding an agenda item that, if approved, would have allowed the commission members to consult with attorney Eric Morris of Braun Kendrick. All three commissioners up for recall rejected the motion, as did Marks and Holzhausen. Only Webster and Brodeur supported the motion.

The board this past week reversed course and agreed the commission could consult with an attorney, with the caveat that costs be kept down.

Following the decision by the Board of Commissioners to award members and other elected and unelected officials bonuses, resident Nicole Ruggiero filed an Open Meetings Act lawsuit seeking to invalidate the bonuses. A Genesee County Judge ordered bonuses $5,000 or more paid out to county employees to be returned.

Ruggiero’s lawsuit remains ongoing, and she has indicated that she is not seeking any monetary payment from the county. Instead, she is seeking an admission of fault by the county in violating Michigan’s Open Meetings Act in determining the amounts county employees were to receive. The board this past week approved a settlement in the case, which has yet to be disclosed.

Earlier this month, Michigan Attorney General’s Office and Michigan State Police admitted a criminal investigation into potential wrongdoing by the county officials who voted to award themselves federal COVID relief funds is underway.