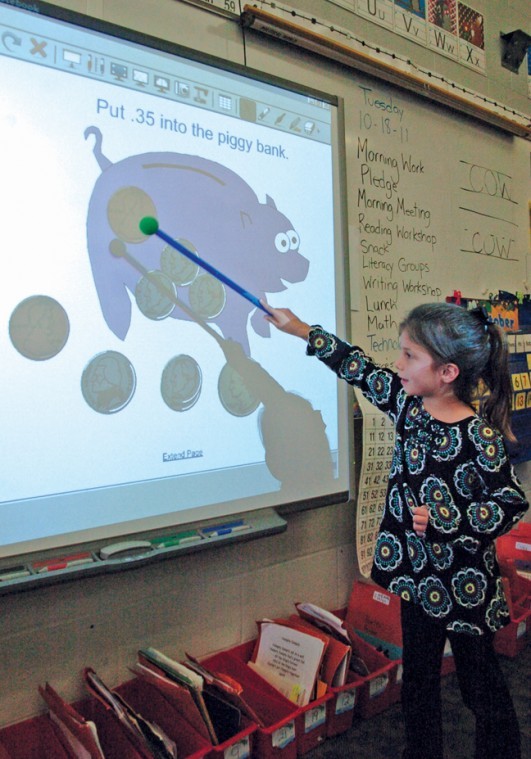 Kassidy Hinds, a first-grader at Shaftsburg Elementary Perry West Campus, uses a Smartboard to move the correct amound of change into the piggy bank as her class looks on. Smartboards, which are touch sensitive, are installed in all elementary classrooms within the Perry School District. 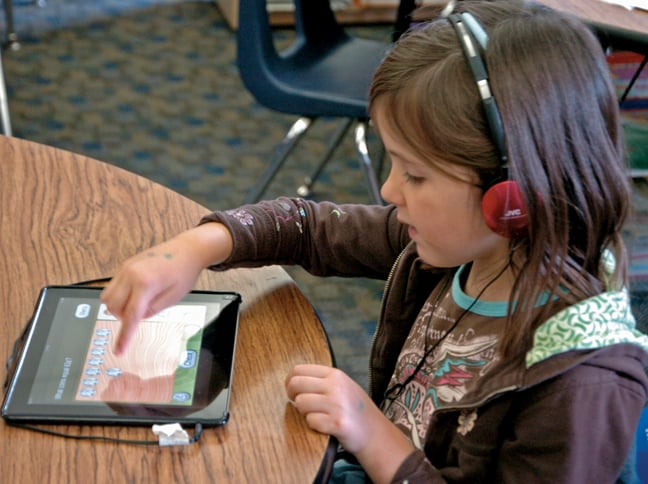 Kassidy Hinds, a first-grader at Shaftsburg Elementary Perry West Campus, uses a Smartboard to move the correct amound of change into the piggy bank as her class looks on. Smartboards, which are touch sensitive, are installed in all elementary classrooms within the Perry School District.

SHAFTSBURG — Students within Perry Public Schools are experiencing some of the newest educational tools available thanks to a portion of the school improvement bond passed by the community in February.

On Tuesday, students in Margaret Sible’s first grade class were hard at work using iPads to play apps that teach them skills like phonics, counting money and identifying letters.

The teacher said the tablets help keep the students engaged for longer.

“I mean, look at this, we’ve been doing this for 40 minutes already and they’re still interested,” Sible said. “I could never keep my kids involved that long on my own.”

She said the iPads are great because they provide instant feedback to the students about whether they are completing the questions right or wrong — something teachers cannot offer because they have to spread their attention out amongst all the students.

“What better way to keep them engaged than to give them direct feedback,” Sible said.

Although the technology is still new to her classroom, Sible said she plans to integrate the iPads into her curriculum. For example, students might sit through a lesson on phonics and then get time to practice what they just learned on the iPads’ phonics apps.

“Almost anything I teach, I can find an app for it,” she said.

“When we’re doing math we get to do the counting game, which is my second favorite game,” Kassidy said, explaining an app that asks the students to count out different amounts of change using coins on the screen. “Sometimes I get it wrong. Like when it goes up to 91 (cents) it gets really hard.”

A student who enjoys reading, Kassidy said her “first favorite” app is the sight reading one, which helps teach students how to sound out words.

“You put your earbuds on and it helps you say the words,” she explained.

Technology director Jesse Hagensen said the iPads are good for younger students because they are more interactive.

First-grader Rachel Ross said the iPads are more hands-on then the computers the class uses once-a-week in the technology lab.

“You use your fingers for this and you use a mouse for the computer,” Rachel said. “You can’t hold a computer and you can’t play it because it has to be plugged in.”

She also likes that her class gets to use the iPads more often than the computer lab.

Hagensen said the district has four carts of iPads, all at Shaftsburg Elementary, which are split between the kindergarten and first grade classes at the school. Teachers throughout the district also have use of their own iPad, on loan, he said. Over the summer, wireless Internet service was installed district-wide.

Interactive Smartboards were also placed in all of the elementary-level classrooms with funds from the school improvement bond. The touch-sensitive screens work in conjunction with a projector and allow the teachers to demonstrate iPad applications, websites and other visual aids.

And the technology improvements aren’t finished — Hagensen said his department is currently working with the district’s secondary schools to determine what technology will best benefit the older students.

The district’s first-grade teachers — Sible, Heidi Burns and April Rozman — collectively issued a statement thanking the community: “We’re so thankful for the community’s support with the technology bond to make all of this interactive learning possible.”

Should Senate Democrats eliminate the filibuster to pass their agenda?