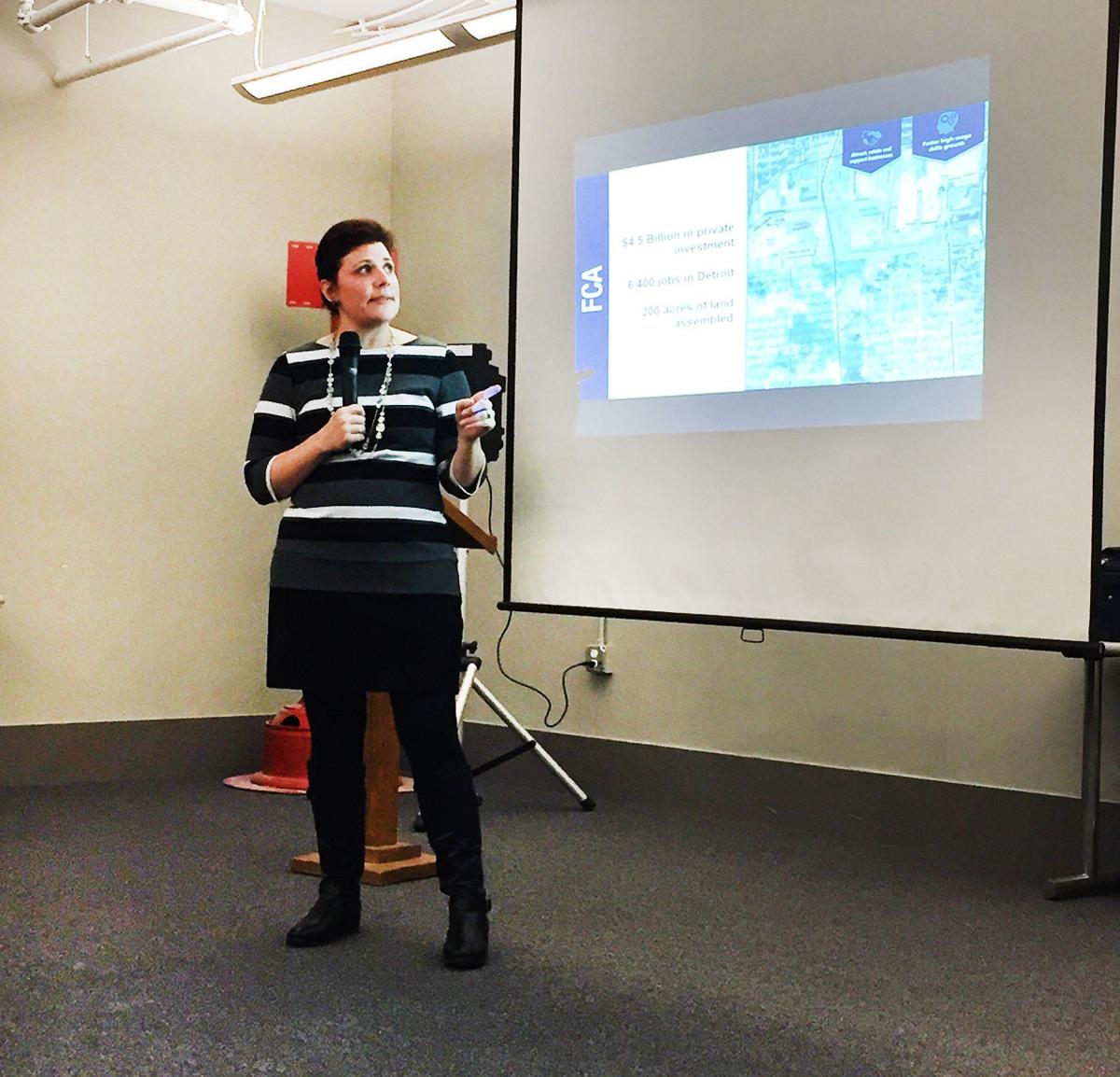 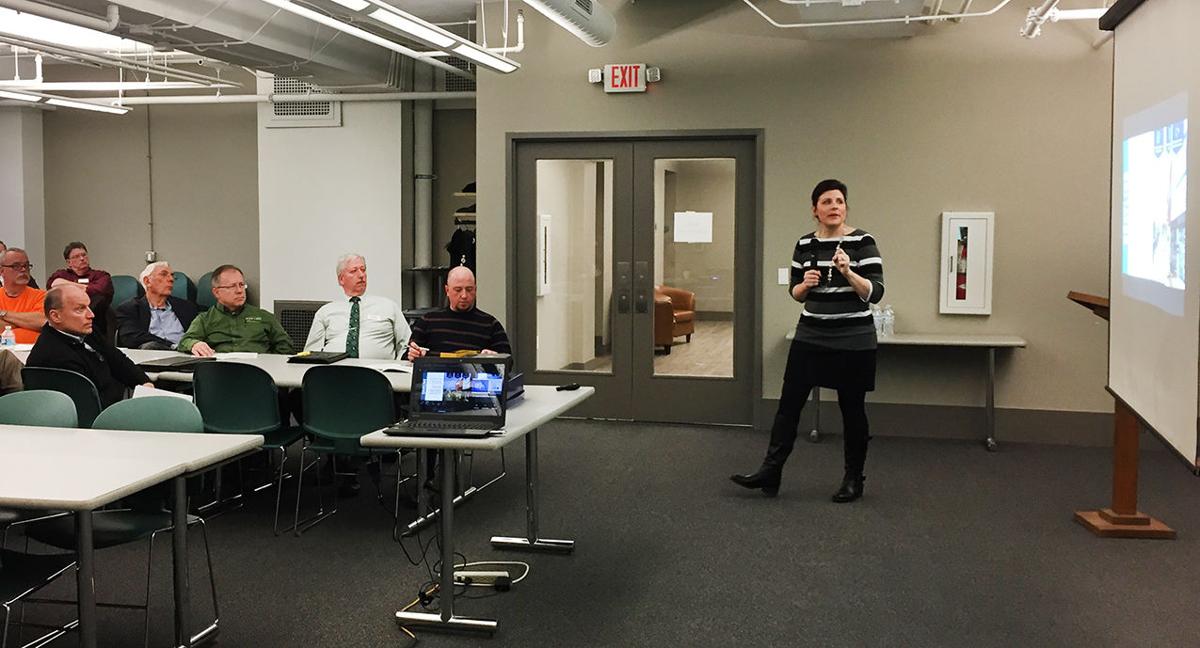 OWOSSO — The Michigan Economic Development Corporation (MEDC) — an agency committed to enabling long-term economic opportunity for all Michiganders — is launching a new five-year strategic plan in an effort to make Michigan’s economy the fastest growing, most equitable and most resilient in the nation.

Monday, Amanda Bright McClanahan, chief operating officer of the MEDC, unveiled the new plan during an hour-long presenation at The Armory. Several business, government and nonprofit leaders from throughout Shiawassee County attended.

“After all of these studies, all of these different engagement activities, we have come to the following conclusion: It’s time for a change, a pretty radical change from what we’ve done up to this point,” McClanahan said Monday. “The consistent areas of concern for the MEDC including funding risks, the potential for economic downturn and the foundational needs of the state require a different vision…We have to continue to form and strengthen partnerships but more importantly, we have to find partners that we haven’t worked with yet.”

The strategic plan has been roughly four years in the making, according to McClanahan, as the MEDC employed approximately 13 third-party source studies in an effort to determine how Michigan and the MEDC measure up to other states, how MEDC programs have performed thus far, as well as to learn what industries the agency needs to focus on moving forward.

McClanahan noted one area of concern for the state is its resiliency to future economic downturns.

“If you look at all 50 states and look at their economic performance over the course of the last five major recessions, Michigan ranks 49th in terms of our resiliency, the only state that’s worse off than us is Indiana,” McClanahan said. “Other states are able to grow during that period, they are able to make progress in ways that we haven’t been able to and that can’t continue if we’re going to continue to move Michigan forward.”

Under the new strategic plan, the MEDC hopes to address all regions of Michigan, including those areas that are geographically disadvantaged, i.e. they meet the definitions of underutilized business zones according to the federal government.

“What we do know from every piece of research that we’ve done on economic development is a dollar put in a geographically disadvantaged area that is facing higher unemployment or lower wage growth or lower gdp growth, we put a dollar there, the return on investment is actually higher than if we put a dollar in a similarly situated area that isn’t geographically disadvantaged,” McClanahan said. “We need to empower and support every region, rural, urban…We need to help every region reach some of that economic growth potential that it has.”

McClanahan added that an area the MEDC has often overlooked is that of the household economic level.

According to a United Way of Michigan study conducted between 2010 and 2017, 43 percent of Michigan households cannot afford basic necessities, including 30 percent in Livingston County and 62 percent in Wayne County.

With several guiding principles — focusing on sustainable, long-term growth; empowering and supporting every region; promoting equitable, high-wage growth; and ensuring a customer focus — the MEDC plans to focus on five areas under the new plan:

n Collaborating on efforts to produce, attract and retain the skills needed for in-demand, high-growth occupations

In addition to the MEDC’s five strategic focus areas, McClanahan said an emphasis is being placed upon regional impact industries.

“This is the space where we’re going to be looking to all of you to help us,” McClanahan said. “We believe each region needs to have an economic development strategic plan and our duty, our goal, is to help you implement your plan.

“We can bring all of the tools we want to look at medical device technology in Shiawassee County, and most of you would be looking at me going ‘No, that’s probably not the right play.’ But if you were to come back to us and say ‘We know where we need to go and we think this is how we have to get there, how are you going to help us MEDC?’ That’s the partnership that we’re trying to build right now with all of the regions in that state.”

In concluding her presentation Monday, McClanahan called upon area business and governmental leaders to start a dialogue with state legislators to emphasize the importance of economic development at the local level, as funding for the MEDC often remains in flux. “For the first time in almost 20 years now, Michigan finally has enough general fund, general purpose dollars where it actually looks like it did 20 years ago in real dollars….For the first time there’s money on the table and everybody is lining up and nobody has a bad story to tell, except when you’re going up against medicaid, going up against child care, going up against schools. The story of economic growth is hard to tell. Legislators, when they hear those stories that make the most impact, they’re coming from you, it’s coming from your stories about what the economic growth in your community has driven. That matters.”

“You know, the biggest thing that I saw here that really got me excited was their determination to try to help those that have been left behind by the economic recovery in the state and in this country,” Horvath said. “We know there’s a lot of people that are either still unemployed or under employed that have not felt the benefits of all that job growth and economic growth. The goal of the MEDC is to try to provide tools, programs, services to address that need, to help uplift people to get into better employment, to reduce those employment barriers,” Horvath continued. “I think that new focus is something they’ve never had before, and I think it’s wonderful and we’re certainly going to support them however we can.”