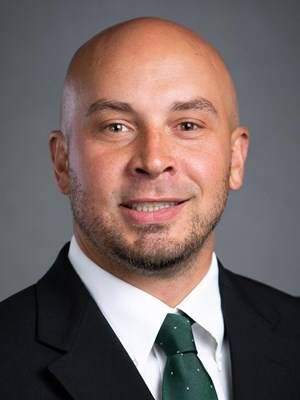 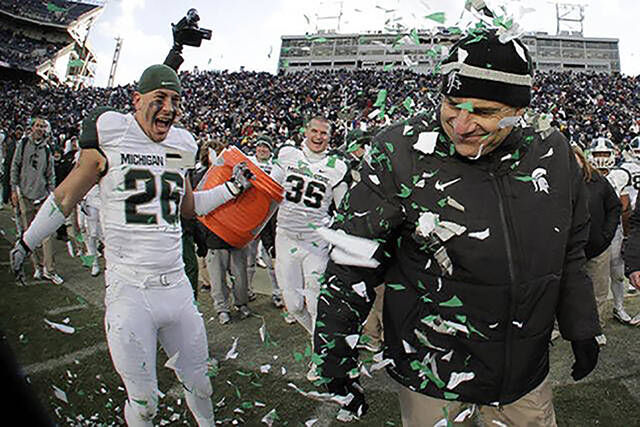 ELSIE — Jesse Johnson has done a lot in a short amount of time.

The 2006 Durand graduate played football at Michigan State, has worked on various football coaching staffs across the country and was a recruiting coordinator at Central Michigan, amongst other jobs.

His career path has now taken him back near his hometown, where about a month ago he took over as the new athletic director at Ovid-Elsie High School.

“It was close to home, I knew what type of kids, family and community I’d be working with at Ovid-Elsie,” Johnson said. “I remember coming over here when I was in middle school and high school and having very fond memories of the stadium being packed, good people.”

Johnson was a standout football player at Durand, graduating as the school’s all time leader in tackles and interceptions, according to his MSU biography. He also played basketball, baseball and track and field.

He played 46 games at Michigan State under Mark Dantonio, including all 13 in 2010 when the Spartans won a share of the Big Ten championship with Wisconsin. Johnson earned his bachelor’s in history from MSU, then went to Central Michigan to study sports administration. While at CMU, he worked as a long-term substitute teacher in Beecher Township.

After graduating from CMU, Dantonio and then-defensive coordinator Pat Narduzzi helped Johnson land a football coaching job at The Citadel in South Carolina in 2012. He came back to the CMU football program in 2013 and 2014, working as a defensive grad assistant for then-head coach Dan Enos.

Johnson spent a year coaching at Syracuse in New York, then returned to CMU a final time to be the school’s on-campus recruiting coordinator.

Dantonio came calling again in 2017 and Johnson worked on his former coach’s staff until his retirement earlier this year. Mel Tucker was hired to replace Dantonio and decided to bring in his own staff, putting Johnson on the job market again.

Johnson said he applied for a few athletic director jobs, but the one in Ovid-Elsie piqued his interest, as it was close to his native Durand. After a series of interviews he was O-E’s guy, replacing Joel Longstreth as athletic director.

Longstreth remains in the district, with Superintendent Ryan Cunningham stating he wished to focus more on teaching. Cunningham said he was impressed by Johnson’s leadership philosophy and vision for the athletic department.

“We feel that Jesse can push Ovid-Elsie to the next level,” Cunningham said. “He is a local guy so he understands the makeup of a community like Ovid-Elsie and he understands what it takes to get the most out of student-athletes, as evidenced by his own story. We feel that his ceiling is very high as a new administrator, thus, raising the bar for our coaches and kids.

“Plus, when Mark Dantonio is one of your references and can speak to your work ethic and character, that’s hard to deny.”

Johnson, while never having been an athletic director at the high school level, believes his various gigs around the country have helped prepare him for the challenge.

“Running (a high school) athletic program and running a football program at the collegiate level I feel are a lot of the same,” Johnson said. “The best way to put it is, the things I’ve seen from good programs and how they’re run and how people are treated. I’ve seen how a bad program is run as far as wins and losses and people not being happy and kind of taking away little things from each one of them. Even for a little bit of a younger guy, I’ve been around the block in the coaching profession, so it’s been good to see different things.”

Johnson is facing the additional challenge of taking over an athletic department during a tumultuous time for sports. The COVID-19 pandemic has thrust many sporting events into doubt, and there is no guarantee fall sports will take place currently. The Michigan High School Athletic Association released a statement last week that said it planned to play fall sports as scheduled, but also laid out contingencies if COVID-19 worsens in the state and forces cancellations.

Michigan has seen a recent spike in cases, with an additional 699 reported on Thursday, the ninth time in 10 days it has topped 500.

Gov. Gretchen Whitmer has indicated in recent weeks that Michigan could scale back its reopening plan if things continue trending in the wrong direction.

“I think the biggest is just the uncertainty,” Johnson said. “I get 20 to 30 calls or text messages a day, somebody contacting me (saying) ‘Hey, what are we thinking?’ We still don’t have definitive answers on everything and I know it worries everybody and I wish I could give people answers. We’re still kind of chasing ghosts right now with the MHSAA until we hear something from them.”

He said some of his concerns are whether there will be full seasons with full student participation, fans allowed in the stands and protocols for loading buses.

“There’s no basis for it,” he said. “Nobody has the answers because nobody has ever dealt with something like this.”

Johnson said one of his goals in his first year is to get to know the Ovid-Elsie community. While COVID-19 precautions have not allowed him to do much in that regard, he said everything he’s experienced so far has been positive.

“That’s one of the things I was excited about getting this job, because I knew the type of community I was already walking into,” he said. “They’ve surpassed what I thought it was going to be. They’ve overdone it.”