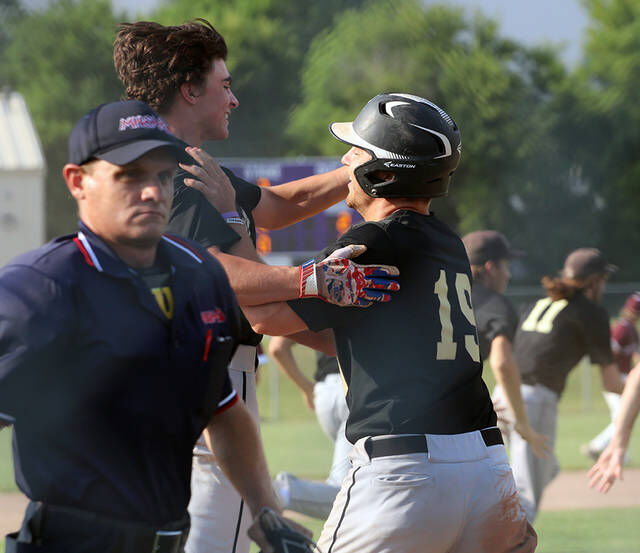 CORUNNA’S Scout Jones, right, scores the winning run on a walk-off double by teammate Gavin Darling (not shown) in the bottom of the seventh inning Wednesday during the Cavaliers’ 3-2 Division 2 baseball regional semifinal win over No. 3-ranked Eaton Rapids (27-5) at Fowlerville. Corunna teammate Corbin Reed is shown at center top hugging Jones as Corunna players rush the field in celebration. 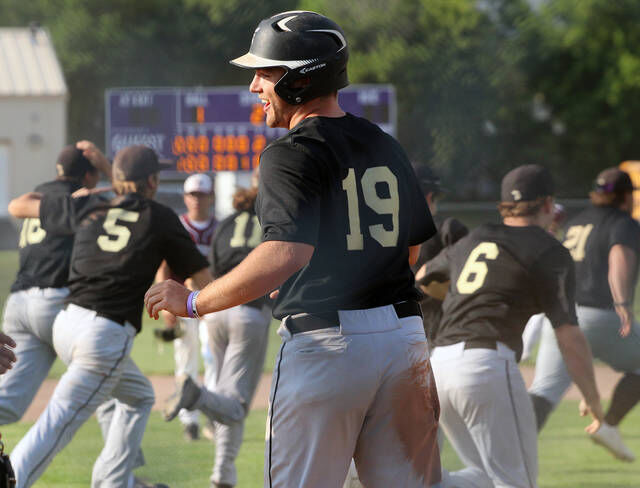 CORUNNA’S Scout Jones (19) scores the winning run on a walk-off double by teammate Gavin Darling in the bottom of the seventh inning Wednesday during the Cavaliers’ 3-2 Division 2 baseball regional semifinal win over No. 3-ranked Eaton Rapids (27-5) at Fowlerville. 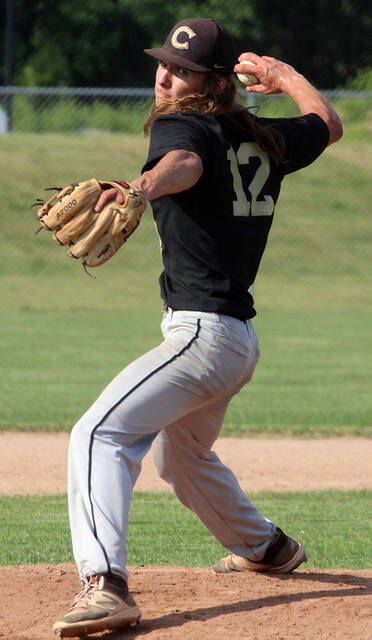 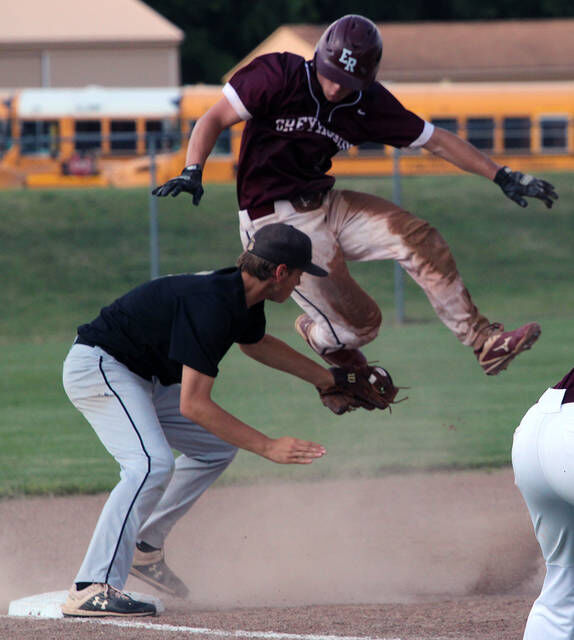 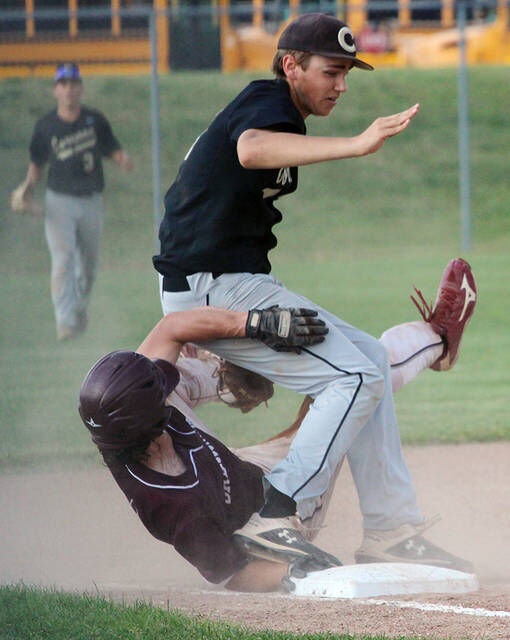 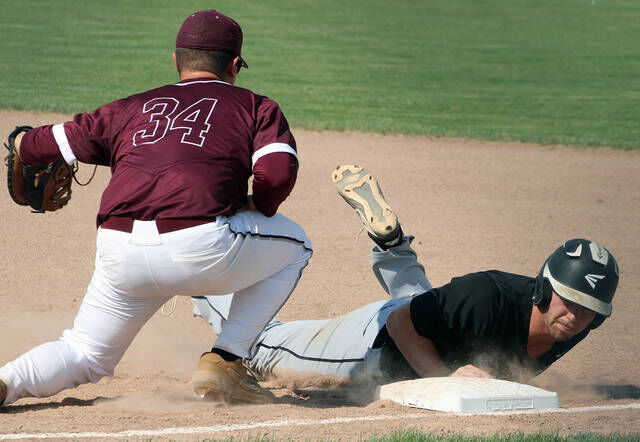 CORUNNA’S Scout Jones, right, scores the winning run on a walk-off double by teammate Gavin Darling (not shown) in the bottom of the seventh inning Wednesday during the Cavaliers’ 3-2 Division 2 baseball regional semifinal win over No. 3-ranked Eaton Rapids (27-5) at Fowlerville. Corunna teammate Corbin Reed is shown at center top hugging Jones as Corunna players rush the field in celebration.

CORUNNA’S Scout Jones (19) scores the winning run on a walk-off double by teammate Gavin Darling in the bottom of the seventh inning Wednesday during the Cavaliers’ 3-2 Division 2 baseball regional semifinal win over No. 3-ranked Eaton Rapids (27-5) at Fowlerville.

With one out in the bottom of the seventh, Corunna freshman catcher Gavin Darling drilled a walkoff double to deep left field, easily scoring Scout Jones from second base. As Jones slid into home triumphantly, the entire Corunna team raced to second base to mob Darling.

“It was a change-up and I saw it coming. I knew he was going to throw it and so I turned on it,” Darling said. “It’s huge for the team. We’re going to go to the super regional. We were confident. We knew we were underdogs and we came in ready to play.”

Corunna coach Chuck Osika said few, if any, gave his team much of a chance to win.

“I think the only ones who did were the 15 guys and the three coaches here,” Osika said. “We’ve been playing well all year. I think right now we’re just at our prime. We had good defense, good pitching and we played a heck of a game.”

Jones, who led off the seventh, reached base by being hit by a pitch. Collin Thompson advanced Jones to second base with a sacrifice bunt down the first base line.

Corunna advanced to the Division 2 regional finals at 12:30 p.m. Saturday against No. 6-ranked Trenton (30-6). The other regional championship game at Concordia will be a 10 a.m. matchup pitting No. 4-ranked New Boston Huron vs. Livonia Clarenceville. Under the super regional format, the Division 2 quarterfinal will be played at 3 p.m.

The Cavaliers (20-15) ended the Greyhounds’ (27-5) season behind a blend of pitching, defense and timely hitting.

Corunna totaled five hits against Eaton Rapids right-hander Ben Steele. Carson Socia went 2-for-3 and scored two runs, while Hunter McCorkle and Darling each had one hit and one RBI.

Corunna took a 1-0 lead in the first inning. Socia got on base with a one-out infield single, advanced to third on a fielder’s choice and an Eaton Rapids error, and scored on a wild pitch. The Cavaliers added another run in the bottom of the sixth following Socia’s single, a two-out walk by Caleb Stahr and a run-scoring single by McCorkle.

Thompson, the Cavaliers’ starter, held Eaton Rapids scoreless through the first six innings on a three-hitter. The sophomore right-hander struck out two and walked five.

“I just basically stuck with the fastball and just threw a regular game,” Thompson said, his voice hoarse from all of the excitement. “I just pitched as usual. I tried to keep it low in the zone … But the sun started getting to me there at the end. It started getting really hot out there.”

Thompson took the mound to start the seventh, but Eaton Rapids tied the game with two runs. Garrett Williams and Braylon Nobach started the inning with singles and a wild pitch made it 2-1.

Eaton Rapids lined out to third baseman Kaiden Develiss and Osika decided to relieve Thompson at that point.

Senior left-hander Cole Mieske came in, but Eaton Rapids tied the game with Isaac Anderson’s sacrifice bunt between first base and the pitcher’s mound.

Mieske got the final two outs by inducing a fly ball and a grounder to Socia at shortstop. Mieske picked up the win as Corunna got the deciding run in the bottom half of the seventh.

“We were ready to make the plays,” Mieske said. “Our pitchers, we’ve kind of struggled, especially me, throwing strikes. But we’ve built trust throughout the season where our pitchers have just got to throw strikes and our fielders will do the rest of the job.”