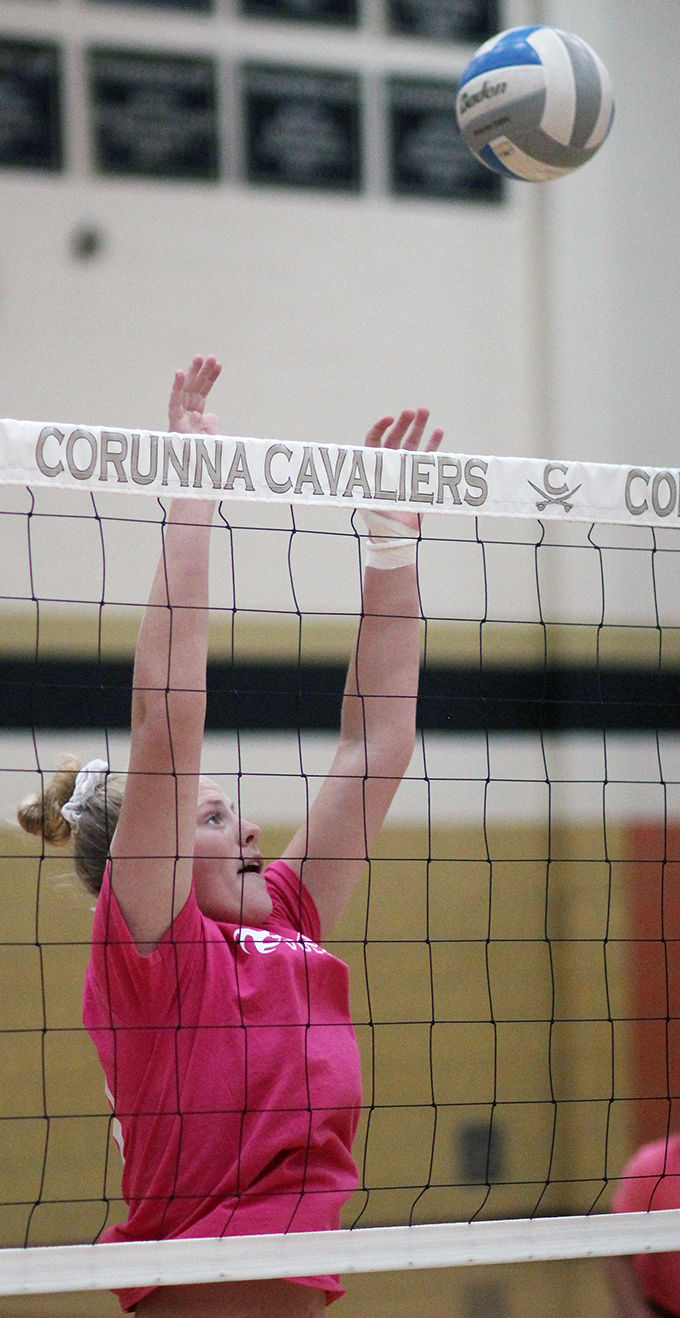 CORUNNA sophomore Ellie Toney goes up to try for a block during practice at Corunna High School Wednesday.

CORUNNA SENIOR Elizabeth Norris blasts a spike in practice Wednesday at Corunna High School. Norris will move from outside hitter to setter this season for coach Kari Carnell's Cavaliers. 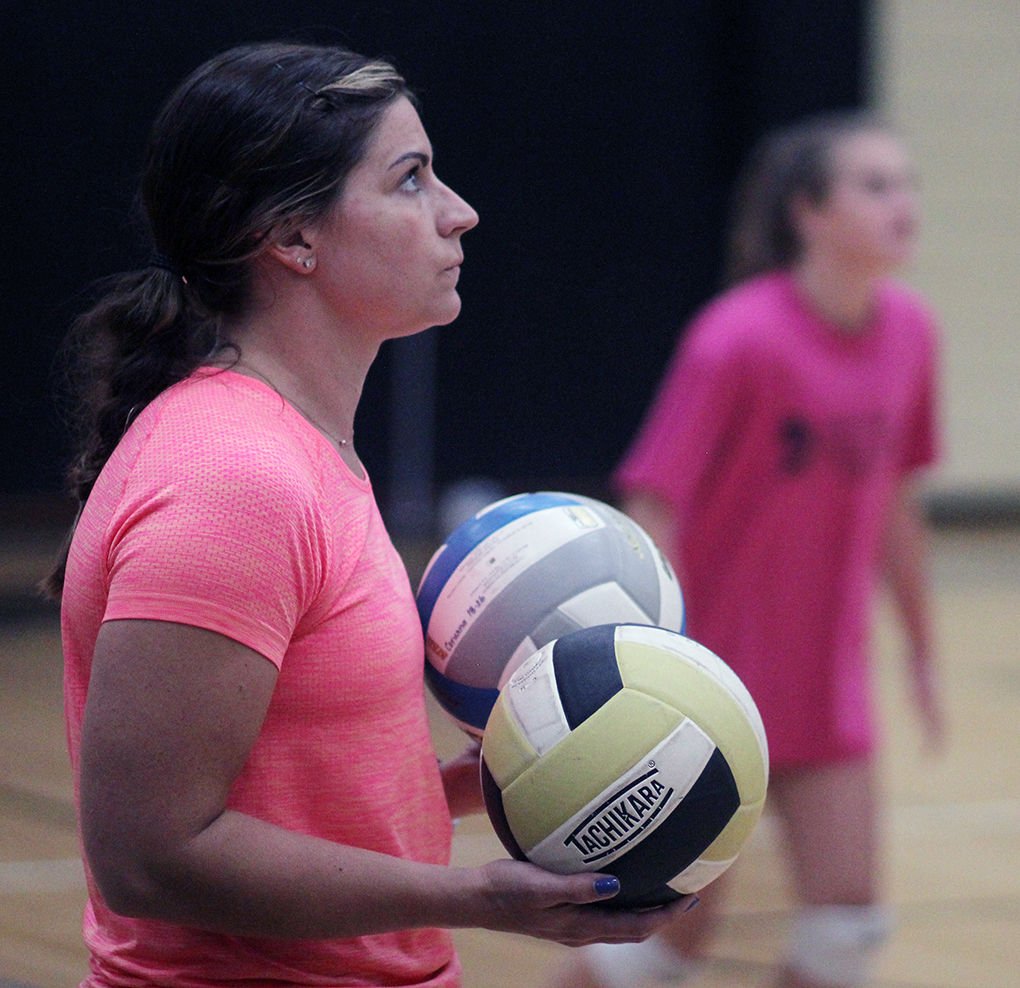 CORUNNA volleyball coach Kari Carnell watches her team in practice Wednesday at Corunna High School. Carnell has led Corunna to three consecutive regional championships and a first-ever berth in the state semifinals a year ago.

CORUNNA sophomore Ellie Toney goes up to try for a block during practice at Corunna High School Wednesday.

CORUNNA SENIOR Elizabeth Norris blasts a spike in practice Wednesday at Corunna High School. Norris will move from outside hitter to setter this season for coach Kari Carnell's Cavaliers.

CORUNNA volleyball coach Kari Carnell watches her team in practice Wednesday at Corunna High School. Carnell has led Corunna to three consecutive regional championships and a first-ever berth in the state semifinals a year ago.

Coach Kari Carnell’s Cavaliers fell to Pontiac Notre Dame Prep, ending a 50-7-5 season. Along the way, Corunna won its third straight district, its third straight regional crown and the Genesee Area Conference Red Division. The trip to the state semifinals was a first for Corunna.

“It set a standard, it made the kids hungry and it gave them the experience of it,” Carnell said. “They know what it takes. They’ve seen it, you know? It’s getting everyone else to buy in again.”

But many of the pieces remain.

Norris, who has committed to play volleyball at the University of North Dakota, set a school record with 879 kills last year — eclipsing older sister Meredith Norris’ mark of 839. Her 879 kills was the 13th best in state history, according to the MHSAA record book.

Norris plays setter on her club team and she plans to play it in college, too, so that move is a natural one for her.

“For club, I’ve always been a setter. So it’s not really new to me,” She said. “But it’s new to me here. I’ve played more setter than outside than middle than anything else.”

Norris said Corunna has some standout hitters to work with.

“I think between our outsides and middles we’ll be fine,” Norris said.

And besides, Carnell said, Norris will be more than just a setter this season.

“We’re still sharing that role a little bit,” Carnell said. “(Norris) is still hitting a little bit, she’s still setting a little bit. We’ve got a lot of people stepping up and playing some new positions and we’re moving some people around. So it’s definitely finding our groove.”

Norris said the goals are the same as in the past few years.

“We have the same goals we’ve always had,” Norris said. “First, a conference championship. Second, a district. Third a regional. You know, we want to keep up the standard that we’ve created over the past few years. I think that’s really important.”

Newcomer Neele’ge’ Sims is a freshman attacker who has shown promise and will make an impact this season, Carnell said.

“Right now she (Sims) is in the middle and we’ve moved Ellie Toney to the outside and Ellie is our other setter too now,” Carnell said. “We’re running it a little bit differently.”

Toney ranked second on the team in kills with 316 last season. Hollister will move to the libero spot and center all of her energies on defense.

“I like it,” Hollister said. “I like defense a lot. I think defense is something I thrive in so it will be a good position.”

Carnell said moving from the GAC Red to the Flint Metro League will be a challenge as well.

“We’re split into two divisions but we will still see Goodrich, we’ll still see Lake Fenton, we add Clio we add Brandon, we add Owosso,” Carnell said. “We still see Owosso a lot in tournaments and stuff. But it will pose different challenges. It will give us a little bit different of a schedule this year.”

Here is a look at the 10 volleyball squads in the Argus-Press coverage area for 2019:

Outlook: Byron won Saturday’s six-school Durand Invitational and has a balanced offensive attack after losing some talented seniors from last year’s squad, including Maylee Hatt and Emily Patterson. The Eagles reached the regional semifinals a year ago before being knocked out by Reese. “We are making progress and coming together nicely, getting into rhythm with one another in the early season,” McGuire said. “The girls have spent a lot of summer time working together. We have some heavy arms and clever defenders. We hope to make a good run for a league title and defend our district title from last year.”

Outlook: Corunna advanced to the state semifinals for the first time last season and return several starters, including Argus-Press All-Area Player of the Year Elizabeth Norris, a first team Division 2 All-Stater who has committed to play at the University of North Dakota. “We hope to improve on last year’s success,” Carnell said. “We return a key core group from last year’s final four run so we have some experience that knows what it will take. We will look to a few newcomers to step right in and help make an impact.”

Outlook: Chesaning coach Ron Poyer said the Indians are looking to get over the .500 mark and be tougher in the Mid-Michigan Actitivies Conference in 2019. “We are looking to be more competitive in conference play this year as well as nonconference competition. We have many experienced returning seniors along with some really good incoming juniors.”

Outlook: Maynard said her team is showing promise. Durand reached the finals of its own invitational Saturday before falling to Byron. “Our season outlook is really good,” Maynard said. “We are a young team but these girls work really hard and are extremely motivated to win. They fight for every ball and refuse to give up. I am very excited about our season this year.”

Outlook: Strieff succeeds Michelle Emmer at the Laingsburg helm this fall. The squad is a senior-dominated one. “We are returning eight seniors and welcoming seven juniors to the team,” Strieff said. “Our goal is to finish in the top three of the (Central Michigan Athletic Conference) and compete for a district title.”

Outlook: Morrice will be led by three seniors who are four-year varsity players in Jenna O’Berry, Mandy Miller and Jade Nanasy. The Orioles opened the season with a bang, beating 2018 GAC Blue champion Webberville. “Setter Jenna O’Berry will definitely be tops in the league as a four-year varisty player,” Gutting said. “Mandy Miller has held her own as a middle at only being 5-6. She is determined and such a positive player. Libero Jade Nanasy is filling some big shoes. She is up for the challenge and will create her own success for our team.” Gutting said Macy BeGole will be a strong outside hitter, while Katelyn Allen will be a force as a blocker. “She will definitely lead the league in blocks this year,” Gutting said. “She had 67 blocks as a sophomore last year.”

Outlook: Kailey Wendling returns for her third varsity season. She has been a setter the past two seasons but will take on a new role as outside hitter. Also back are Kerra Hinrichs at middle hitter and Emma Bruff, a libero and co-captain with Wendling. “We are returning three starters this year after losing a large senior class,” Beardslee said. “Our girls are adjusting to their new roles well and we are looking forward to a successful season.”

Outlook: Miller said her squad is a bit green, but looks talented. “This year is looking very strong for us,” Miller said. “We have a young team with only four returning players, but we have filled our gaps well with our newcomers. The girls know how to work hard and play like a team.”

Outlook: Former Perry volleyball coach Stephen Fitzpatrick is now at Owosso, succeeding Marley Apsey. The Trojans currently are 6-3-1 are led by returning Flint Metro League honorable mentions Newell and Sovis. Newell is a four-year varsity player at outside hitter who led the team in kills and digs in 2018. Sovis is a three-year varsity player. Six-foot freshman Kendall Ihm will be a key force at the net. “We have some talented young athletes and are looking to establish a good foundation for the future of Owosso volleyball,” Fitzpatrick said. “I expect us to compete hard and improve our performance substantially from a year ago.”

Outlook: Perry has started 1-5. Stevens said there will be some growing pains both for the team and for the coach. It will take some time for the team to adjust to a new system as Stevens is in her first year at Perry after coaching at Laingsburg last season.