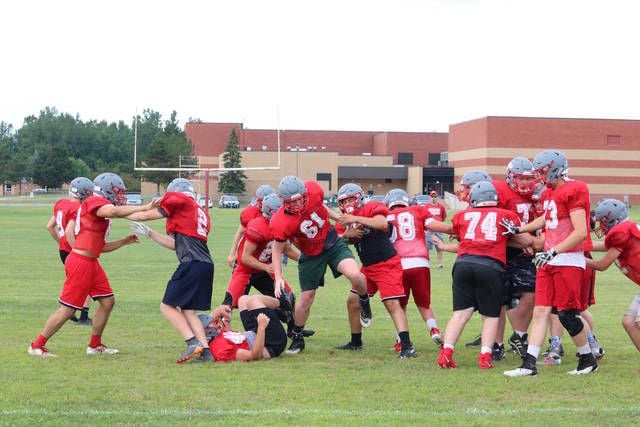 Perry players run through plays during a preseason practice. The Ramblers are looking to improve on last year’s 4=5 record. 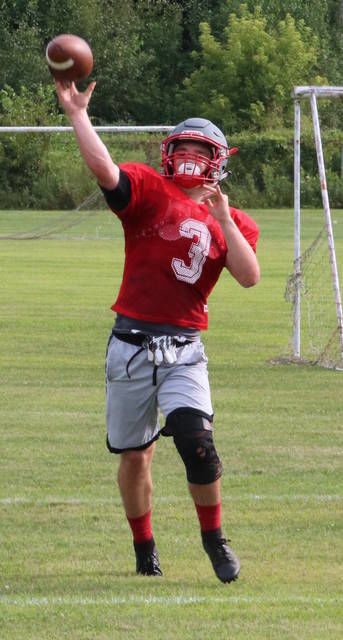 Brodie Crim, one of four players who played quarterback for the Ramblers last season, takes over as the starter in 2019. 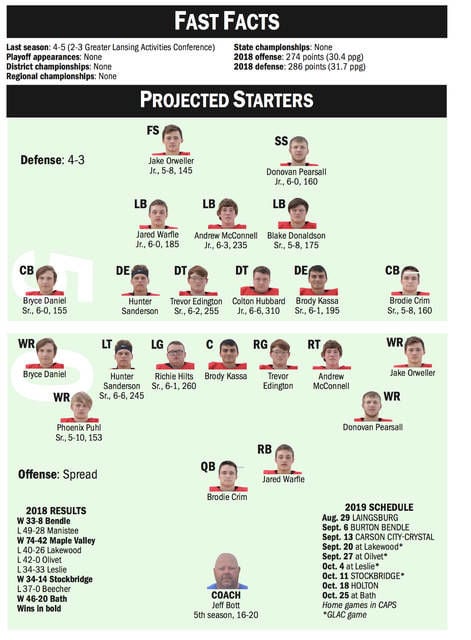 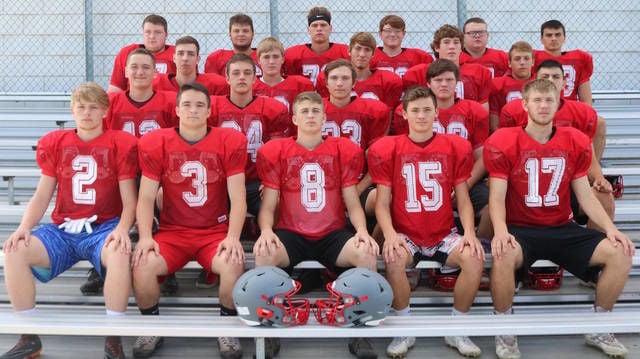 Perry players run through plays during a preseason practice. The Ramblers are looking to improve on last year’s 4=5 record.

Brodie Crim, one of four players who played quarterback for the Ramblers last season, takes over as the starter in 2019.

But, with the H-word out of the way, Bott is perfectly willing to talk about his team.

“We have quite a few kids coming back,” he said. “We have almost our entire offensive line coming back, and that’s what we lean on. We lost a lot of dynamic athletes, kids who could do things in space, but our (modus operandi) is we’re going to run the football. We’ve got the pieces we need. We just have to get them into the right spots and let them go.”

Brody Kassa returns at center to lead Perry’s offensive line, with Richie Hilts at left guard and three-year starter Trevor Edington on the right. Hunter Sanderson is at left tackle, with right tackle to be determined. All of the returners are seniors.

They’ll be opening holes, as the plan goes, for Brodie Crim, an early-season starter at quarterback before a knee injury ended his season.

“He’s a dynamic athlete who’s done everything for us forever, and now he’s a senior,” Bott said. “He’s the guy full-time, now.”

Joining him in the backfield will be Jared Warfle, who saw time there last year and has earned a starting position.

“We have three other kids we could put in there who I feel comfortable with, but Jared has earned the job,” Bott said. “He’s had a great camp and is a very dynamic football player with speed and power.”

Those qualities will be crucial for a running back in the spread, which Perry employs. The Ramblers will have four wide receivers, but they plan to run the ball, by design.

“We did throw more last year, but we’re going to smash the football this year,” Bott said. “That’s what the players want to do. It started with them in the offseason. If that’s what they want, that’s what we’ll do.”

But, being a spread attack, the Ramblers will throw the ball. Bryce Daniel, a returning senior, leads a receiving corps that also includes Jake Orweller.

“We have a couple others we can put in there,” Bott said. “We aren’t as deep in receivers as we were last year. We have more big bodies than we have in the past, but we have enough kids who can make plays.”

That will be necessary if the Ramblers want to do in 2019 what no Perry team has ever accomplished — earn a playoff berth.

Getting to the postseason is on top of Crim’s list of goals for his senior season.

“It’s been my goal since my sophomore year on varsity,” he said. “We haven’t been to the playoffs yet. That would be huge. It’s my goal personally, and our team goal as well.”

On defense, Bott has switched to a 4-3 formation this season to take advantage of his linemen’s size.

“They’ve worked super hard,” he said. “This is a close-knit group that doesn’t care who gets what in terms of success, and they’ve done this on their own. That’s the coolest part to see. They’ve taken control and decided they want this. It’s been very, very fun to coach.”

Before any playoff talk, the Ramblers are looking to win a slimmed-down Greater Lansing Athletic Conference.

The GLAC is down to five teams with the departure of Vermontville Maple Valley, which has switched to 8-man football.

With only four league games, each one is that much more critical.

“It also makes it a top-heavy league,” Bott said. “Olivet and Lakewood are who they are every year. Leslie’s got a new coach. Jeremy (Killinger) at Stockbridge has been there forever, and you know what you’re going to get out of him.”

But, before that, the Ramblers have three nonconference games, starting with the resumption of a rivalry with Laingsburg at home tonight.

The Wolfpack won three of four in a series that ran from 2013-16, but Bott is looking forward to Laingsburg’s return to the schedule.

Bott is looking for a fast start, but his teams has started fast the last couple of seasons before fading.

“We’ve got to get out of the gate, and we have to figure out how to beat Laingsburg,” he said. “We have to win that first one to see how it goes. We have to take care of what’s in front of us, or whatever cliche you want to throw out there.”

Part of the process, Edington says, is that close-knit feeling Bott mentioned.

“We have definitely come together as a team,” he said. “We’re going to go game-by-game and work our butts off to get to where we want to go.”