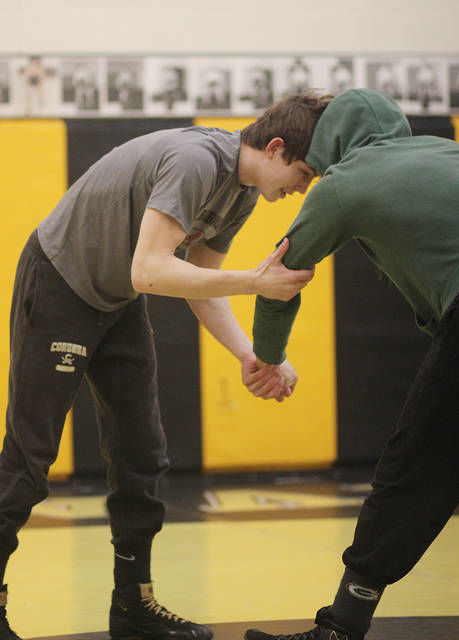 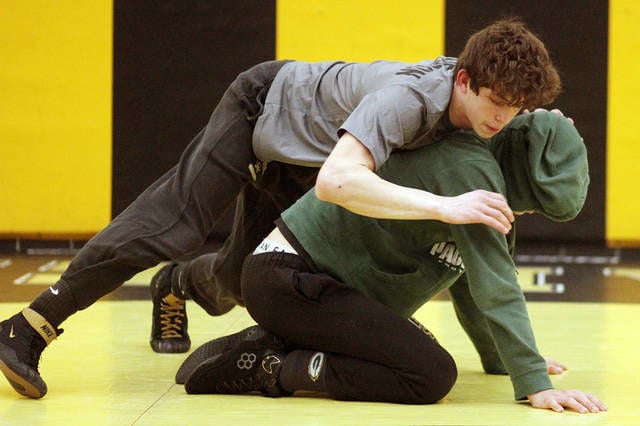 Ovid-Elsie, Durand and Perry may have something to say about that.

The team district with the most area schools participating also has the potential to be one of the most competitive ones.

They wound up fourth overall in the Metro League, thanks to Saturday’s effort.

“The Flint Metro Championships gave us momentum,” Wibert said. “I think there’s three teams in the district pretty evenly matched. Obviously, there are a lot of pivotal swing matches and we hope to come out on top.”

“I believe we’re going to win it,” Anderson said. “We have a pretty strong lineup and everyone is healthy right now.”

Corunna wrestles Ovid-Elsie first tonight, while Durand takes on Perry in the other semifinal. The semifinals start at 5 p.m. and the winners meet for the title at 6:30 p.m.

“We beat Owosso by six and Corunna beat them by (five),” Spiess said. “This will be a rematch of last year’s team district final and will be a fun match to watch.”

“This district has fairly evenly matched teams,” Hittle said. “The second round will depend on who’s healthy and has more fight.”

Spiess said he believes that Durand will have the edge against the Ramblers.

“Durand has a full lineup compared to 10 wrestlers for Perry,” Spiess said. “Durand should win on numbers alone, but you never know.”

Outlook: Owosso (9-21) finished 11th out of 12 teams in the Flint Metro League Championships last weekend. Mt. Pleasant was fourth at the Saginaw Valley League Championships. The prohibitive favorite is DeWitt, ranked No. 3 in the state by Michigan Grappler. The Panthers placed second at the Capital Areat Activities Conference Blue Division finals. St. Johns was fifth at the CAAC Red/White Championships.

Outlook: Alma, ranked No. 3 in Division 3, is expected to win. Chesaning finished tied for fifth with Byron at last weekend’s MMAC Championships.

Outlook: New Lothrop (20-1) won the 2020 MMAC title and sports a No. 2-ranking in Division 4 (Clinton was ranked No. 1 by Michigan Grappler). The Hornets edged Montrose for the MMAC crown, 2011/2 to 200 points. No other team in this district is ranked in the top 10, so coach Jeff Campbell’s Hornets should be expected to coast to a 25th straight district title.

Outlook: This district is just a two-team show. Byron tied for fifth at the recent MMAC Championships. The Eagles reigned as district champions last season and will try again against the Bucs.

Outlook: Laingsburg (8-9) head coach Shawn Baynes said Dansville is the tournament favorite. “They have beaten all of the teams in this district during the regular season,” Baynes said. “But anything can happen in the postseason. The Wolfpack is hungry and motivated to do their very best.”