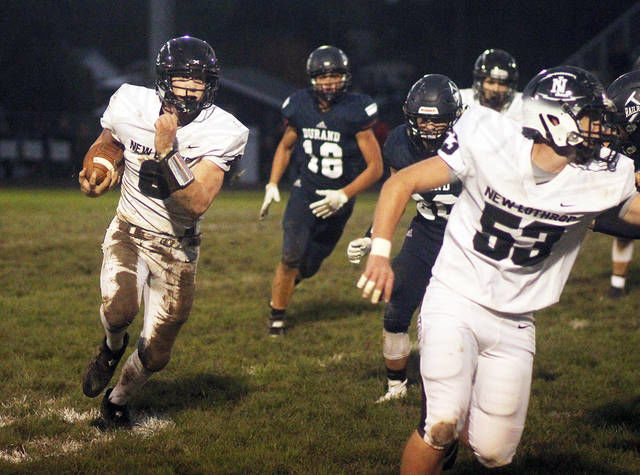 NEW LOTHROP junior quarterback Cam Orr, left, runs for good yardage in the first half at Durand Friday. Orr set a school record with seven rushing TDs in a game as the No. 1-ranked Hornets defeated the Railroaders, 58-14. 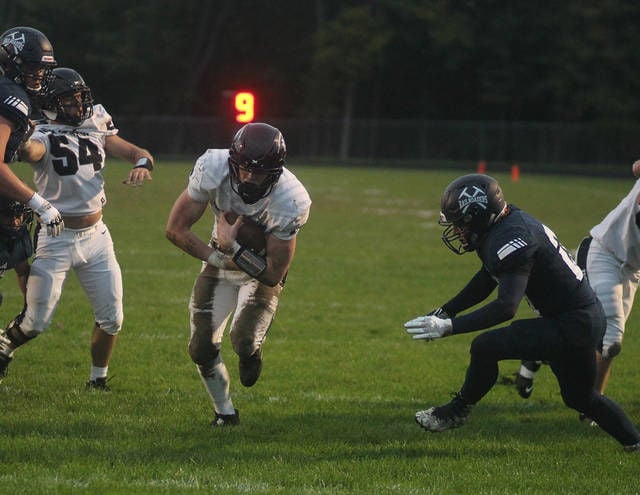 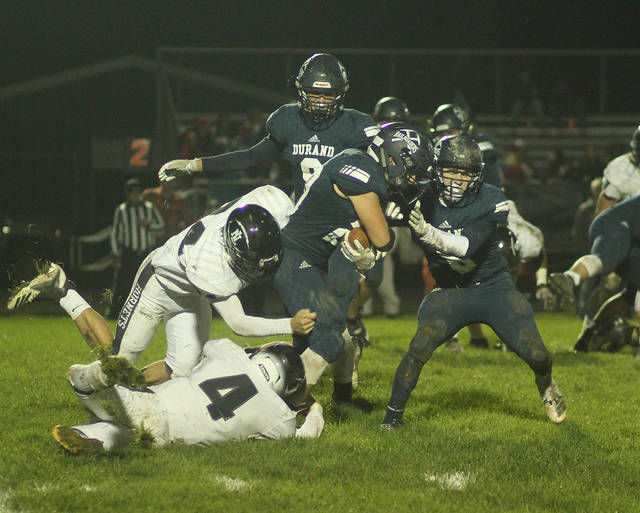 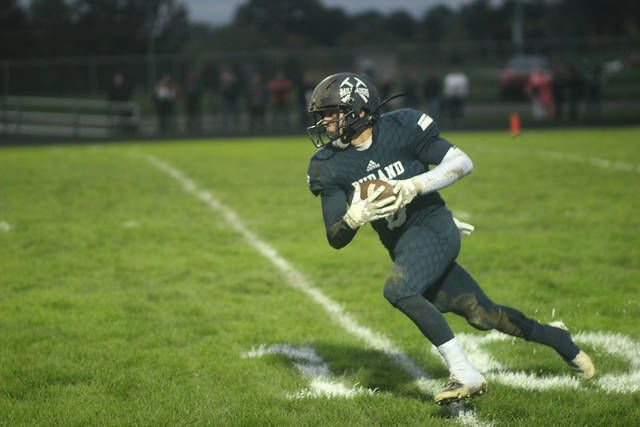 DURAND’S BROCK HOLEK returns a kickoff in the first half against New Lothrop Friday. The Hornets won, 57-14. 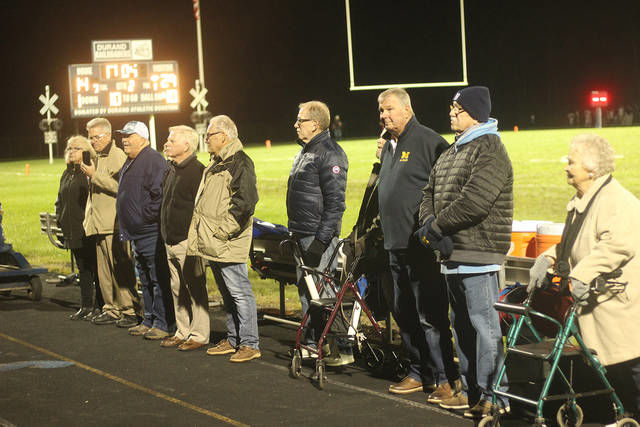 NEW LOTHROP junior quarterback Cam Orr, left, runs for good yardage in the first half at Durand Friday. Orr set a school record with seven rushing TDs in a game as the No. 1-ranked Hornets defeated the Railroaders, 58-14.

DURAND’S BROCK HOLEK returns a kickoff in the first half against New Lothrop Friday. The Hornets won, 57-14.

DURAND — With starting All-State quarterback Avery Moore out with a banged up hand, Cam Orr made the most of his first starting assignment.

Orr rushed for a school-record seven touchdowns on 20 carries as No. 1-ranked New Lothrop shook off a slow start to down Durand 58-14 Friday at Roundhouse Stadium.

“I was getting the reps this week in practice,” said Orr, who finished with 165 yards on the ground. “I just trusted the line all game and they made some huge holes … We were just getting guys out of position with jets and keeps and stuff like that. The line was giving me space and we had some one-on-one matchups.”

Orr became the 12th player in state history to run for at least seven touchdowns in a game, tied for third-most all-time with nine other players. The state record is nine, set by Schoolcraft’s Kobe Clark last season.

Mike Golden of Frankenmuth had eight rushing scores in a 2005 game.

“Cam, as our back-up quarterback, is expected to do that, not miss a beat,” Galvas said. “And he came in and we didn’t miss a beat. He did a great job of running the offense tonight … He runs heavy. He’s a tough guy to bring down, tough to tackle, especially in these type of conditions. He probably likes playing in mud pits.”

Galvas was in a good mood after the game — even joking there may be a quarterback controversy. He said Moore would indeed be back in the starting lineup when ready.

“(Avery) just got his hand dinged up last week,” Galvas said. “He’s good. Had he needed to go he would have been able to go. It was just an extra precaution.”

The Hornets were down several players in addition to Moore — missing running back Will Muron, lineman Will Taylor and cornerback Issac Richardson

“We had some guys out and we talked about next man up, all week,” Galvas said. “We needed them to step up and they did that.”

“We just capitalized on our first drive of the game,” Purdy said. “I got a great block from Kyle Winslow and I saw them bite on all of the fakes and the misdirection we have. Our O-Line did great.”

Durand was stopped on a two-point conversion run and New Lothrop got two more Orr TD runs to lead 29-14 at halftime.

“We had those guys 16-14 and we missed our two-point conversion,” Durand coach Rick Winbigler said. “We’re playing the defending state champs and when we’re on, we’re a great football team. Hats off to them in the second half. They played their butts off, but you know what? We came out and we didn’t lay down.”

New Lothrop put the game out of reach with 21 straight points on three Orr touchdown runs. New Lothrop center Colby Hemgesberg said the Hornets played much better in the second half.

“We knew we had to pick it up and we came in a little lackadaisical,” Hemgesberg said. “But we definitely picked it up after that.”

New Lothrop’s Julius Garza rushed for 114 yards on seven carries. Andrew Krupp ran in New Lothrop’s final touchdown, while Alec Mangino had one reception for 48 yards. The defensive leaders were Mangino and Nick Albert, each with eight tackles.

Durand rushed for 270 yards. New Lothrop finished with 332 on the ground. No individual team stats for Durand were available at press time.