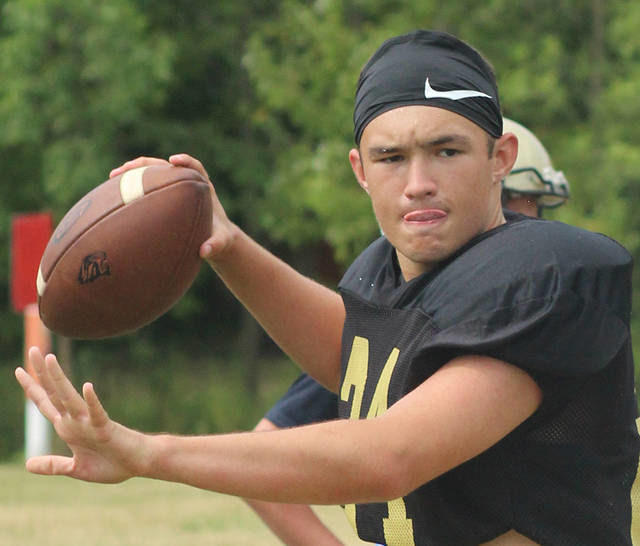 CORUNNA senior quarterback Peyton Norton launches a pass during a passing drill Wednesday afternoon during Day Three of high school football practice at Corunna. Norton started at quarterback for most of last season. 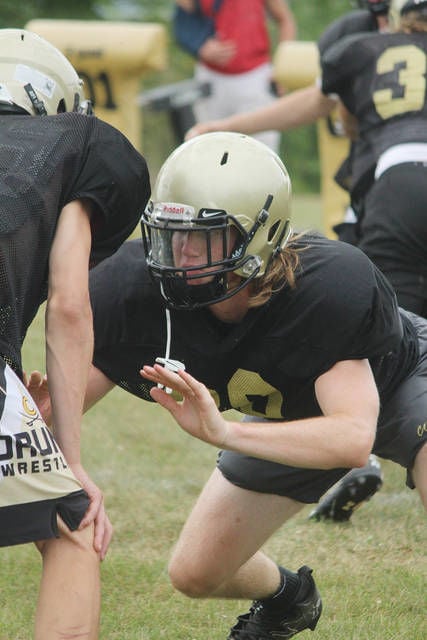 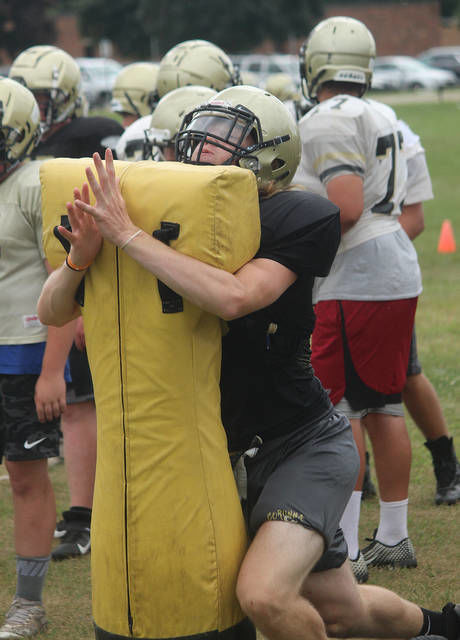 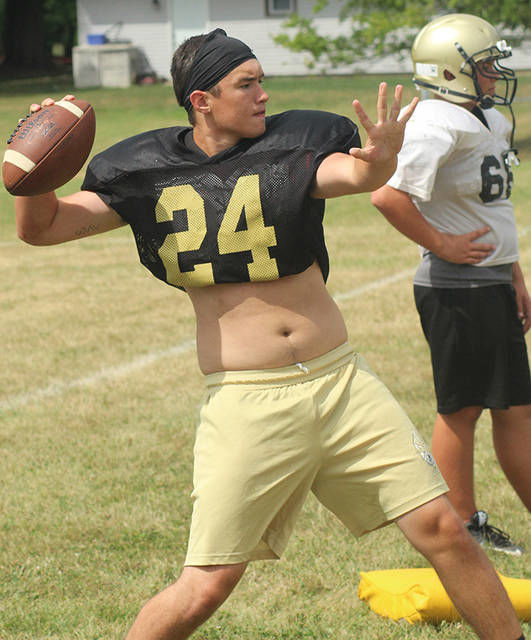 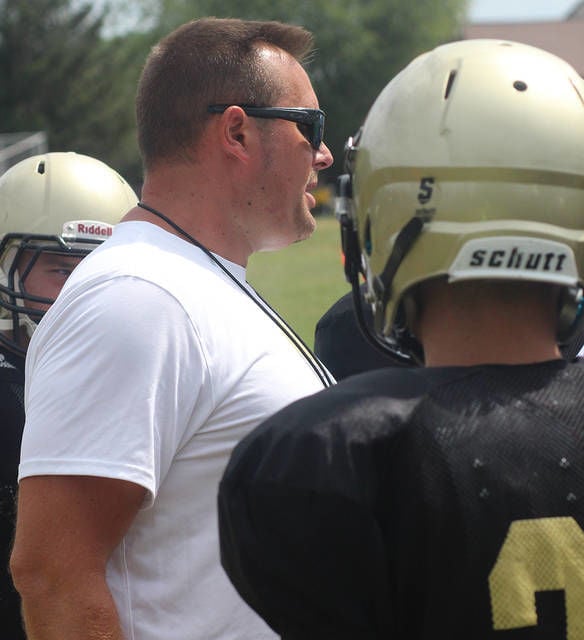 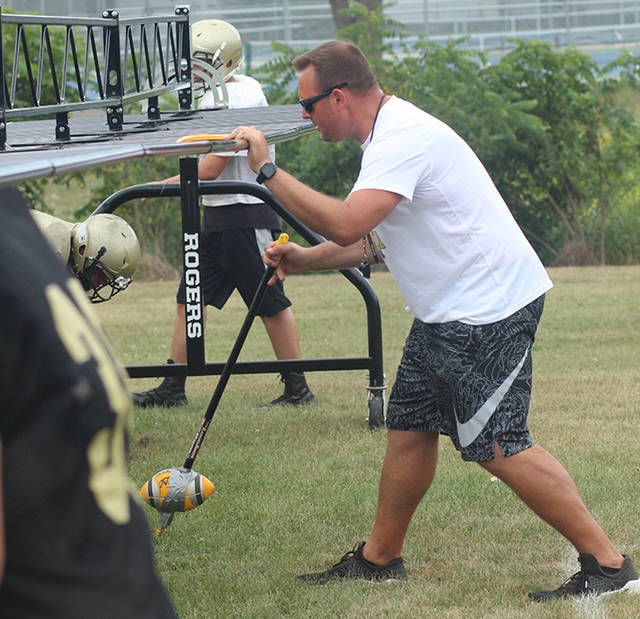 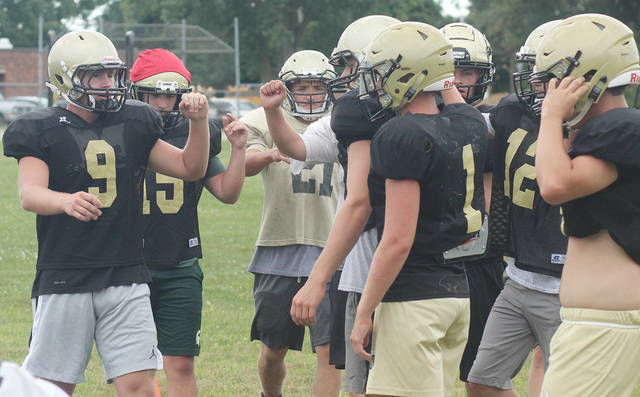 MEMBERS of the Corunna football team gather together after completing a small group drill Wednesday at Corunna High School. 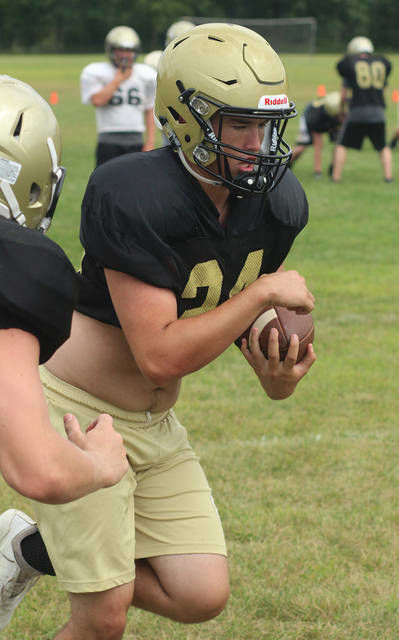 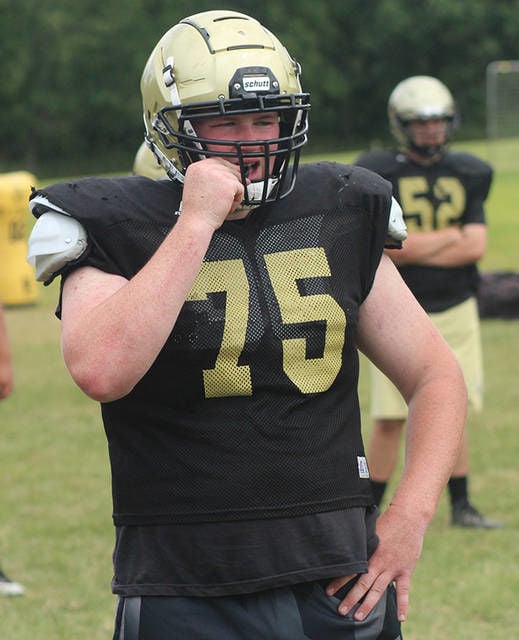 CORUNNA center Alex Holmes adjusts his facemask during Wednesday afternoon’s practice at Corunna High School. Holmes will be one of the leaders on the Cavalier offensive line in 2019. 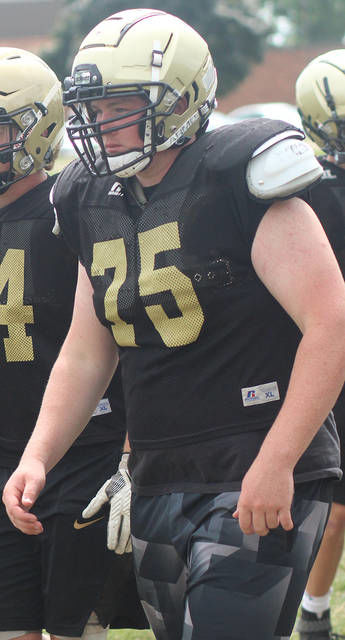 CORUNNA senior quarterback Peyton Norton launches a pass during a passing drill Wednesday afternoon during Day Three of high school football practice at Corunna. Norton started at quarterback for most of last season.

MEMBERS of the Corunna football team gather together after completing a small group drill Wednesday at Corunna High School.

CORUNNA center Alex Holmes adjusts his facemask during Wednesday afternoon’s practice at Corunna High School. Holmes will be one of the leaders on the Cavalier offensive line in 2019.

The Cavaliers have adopted “Turn the Page,” as their team motto in 2019 — but not as a reminder of last season’s disappointing 1-8 campaign, head coach Kyle Robinson said.

“Actually it’s a complete opposite to that,” Robinson said. “We know, regardless of whether the previous year was a really good one, or a negative one or an in-the-middle one, we don’t talk about last year at all. We use it from a scouting standpoint and a teaching standpoint but not other than that. I give full credit to our players for that.”

Steinacker said it is a simple reminder that each day starts with a blank canvas.

“We go to practice and if there is a bad play or even a good play, we turn the page and we figure out how we can get better. Or, if it went bad, where it went wrong at — just to fix it.”

“We’re turning the page over and starting new,” Norton said.

The Cavaliers have turned the page on a new conference as well, joining the Flint Metro League after five years in the Genesee Area Conference Red Division. They join neighboring rival Owosso, along with Clio, Goodrich, Lake Fenton and Ortonville Brandon.

Led by Robinson and Corunna defensive coordinator Steve Herrick, Corunna’s practice Wednesday was intense, busy, and enthuasiastic. Defensive alignments were taught as the team confronted different offensive formations. Moves were worked on such as uncoiling from blocks, swims and cross-over moves, and blocking techniques.

There was little time for idleness, and that was welcomed by Steinacker, a 6-foot-7 junior who was named a Division 4 All-State defensive end by The Detroit Free Press of a year ago.

Steinacker, who had 57 tackles and five sacks last season, said he thrives on playing defense. He can react instinctively to what the offense is doing, he said.

“It’s just knowing I can hit,” Steinacker said. “I don’t have to worry about things like I do on offense — like if I don’t block what’s going to happen to the back.”

Steinacker, a high jumper in track who cleared 6 feet, 2 inches, last spring, is also regarded as an offensive weapon to watch out for. He was reported to have received a scholarship offer from the University of Michigan last summer.

“His physical presence is obviously going to get everyone tuned into who he is,” Robinson said. “But besides that, a lot of people don’t see how good of a person he is with his teammates. You would never know that he has offers and he was an All-State defensive end. He’s one of the guys and he lets his actions speak for him.”

Steinacker said the team seems closer than it was in 2018.

“We’re all a family this year — we’re all really close together,” Steinacker said. “So I think it’s going to be a good year this year … I just want to do my part and help these guys win games. That’s what I’m focusing on this year.”

Players were allowed to wear shoulder pads on Wednesday, after the first two days of practice where only helmets were allowed. Full pads will go into effect Friday.

Robinson said he expects approximately 29 players on the varsity roster this season — give or take a few — and all were in attendance Wednesday.

One of the veterans on the field was Norton, who earned the lion’s share of starts at QB a year ago.

“I feel prepared and I feel ready,” Norton said. “I started most of the games last year so I feel I have a little bit of an understanding of what to expect. I played quarterback for every game except the first game.”

Norton said Corunna’s offense will have a few more added wrinkles to it as the year progresses.

“Coach has installed what he thinks we should run right now,” Norton said. “Right now we’ve got a bunch of different looks that we’re going to try to come out with. We’re not trying to get too crazy in Week 1, but as the year goes on, we’re going to continually add stuff.”

Robinson said Norton is always striving to get better, no matter what the play or what the situation.

“He gained some valuable experience last year starting from Week 2 all the way to Week 9,” Robinson said. “We ask a lot of our quarterbacks being an option-based team. He’s really really good at understanding what every single play calls for — from the smallest intricacies all the way to the easiest parts, like the reads.”

If Corunna hopes to improve on last season’s victory total, it must improve its offensive line. And one player who believes that will be the case is center Alex Holmes. He’s one of four returning starters, along with Michael Daniels, Jacob Lloyd and Alex Schwab.