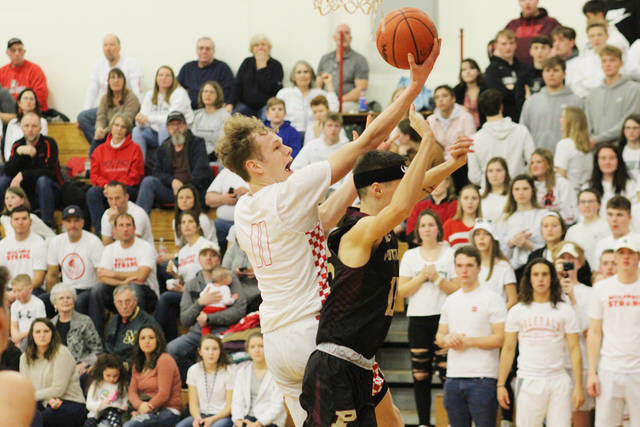 Laingsburg’s Zach Hawes goes up for a transition layup Friday against Potterville. 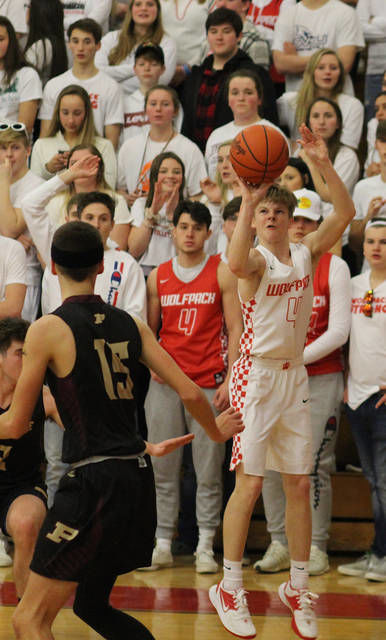 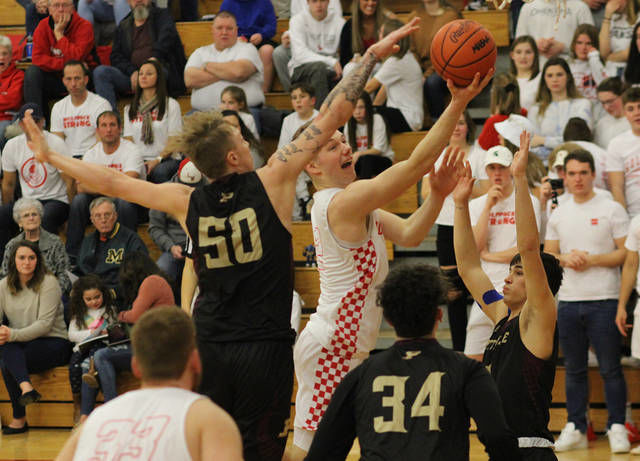 Laingsburg senior Gabe Hawes splits the Potterville defense for a layup. Hawes led the Wolfpack with 28 points on the night. 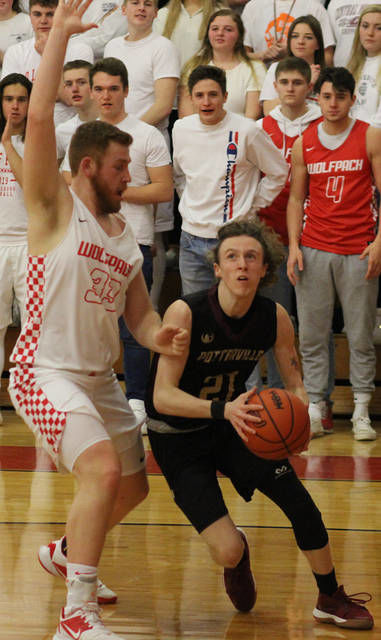 Laingsburg’s Zach Hawes goes up for a transition layup Friday against Potterville.

Laingsburg senior Gabe Hawes splits the Potterville defense for a layup. Hawes led the Wolfpack with 28 points on the night.

LAINGSBURG — Laingsburg found itself in another dogfight with Potterville down the stretch Friday night.

Wolfpack senior guard Gabe Hawes sank two free throws in the closing seconds and Laingsburg held on for a 76-74 victory over the Vikings — without any scoring controversy this time.

Hawes finished with 28 points despite playing while battling the flu.

“I’m not feeling too great but hats off to my teammates, they found me when I was open and the game just came to me — I wasn’t even thinking about it,” Hawes said.

The Wolfpack had the lead for the entire night, at times by as much as 12 points, but over the course of the second half they watched the Vikings slowly chip away at it.

By the end of the third, Potterville had cut the lead to six and got it down to four with under a minute to go in the game. Following some key free throw misses by the Wolfpack, Potterville’s Cole Davis fired hit a deep wing 3-pointer with just 8.8 seconds left to tie it at 74.

“When (Davis) hit that deep three to tie it, that was the first time Potterville tied it since the start of the game,” Laingsburg coach Dan Morrill said. “We had a lot of reasons fold down the stretch, but we trusted our guys and put the ball in their hands.”

On the ensuing possession Hawes received the inbounds and was fouled almost immediately while in the double-bonus. Hawes hit both free throws to restore the Wolfpack lead. Though the Vikings got down the floor and got look as time expired, they couldn’t connect and Laingsburg won.

Laingsburg (11-3, 9-2 Central Michigan Athletic Conference) senior guard Connor Thomas said there were a lot of similarities between both the Wolfpack’s matchups with Potterville. Thomas was one of three members of the Wolfpack to hit double digits putting up 13 points in the win.

The two teams played Jan. 7 at Potterville, won 68-67 by the Vikings. Laingsburg alleged Potterville was credited with a phantom layup in that contest, and appealed the result to both the CMAC and MHSAA.

The league met Feb. 3 and decided neither team would be “negatively impacted” by the Jan. 7 game. The league will reconvene March 2 to determine the final standings.

“I feel really good for our kids,” Morrill said. “I feel like they’ve been owed something, if for nothing else for just having to answer questions and deal with (the Potterville controversy). We didn’t feel like we played our best the first meeting, so I’m not so sure we felt that we deserved (the win) even with the controversy. I think both teams played a better game this time.”

After an electric start to the game where Laingsburg could do no wrong, the perfect storm of factors helped Potterville close the gap.

“We’re in the midst of working things so sometimes when you focus too much on one aspect of the game, like offensive rebounding, another area may suffer, like our transition defense in the second half,” Morrills said.

The officiating tightened up in the second, impacting the Wolfpack’s play. There were 16 fouls combined in the first half, compared to the 20-plus called in the second.

“It’s not our style to play possessions,” Morrill said.”We’re a team that likes to get out and run in transition and that’s really how we build our leads. So the fact that there was a lot of whistles didn’t feel great for our team; they’re not comfortable playing that way but to their credit they did a good job of it.”

Even with the at times stressful second half Laingsburg was overall excited with the victory especially in the wake of the controversy that over shadowed the last meeting between the two teams.

“This win feels great, I wish we could have closed it out more but this feels great,” said Thomas. “Our crowd was amazing tonight, our student section was great and we just brought on the court.”