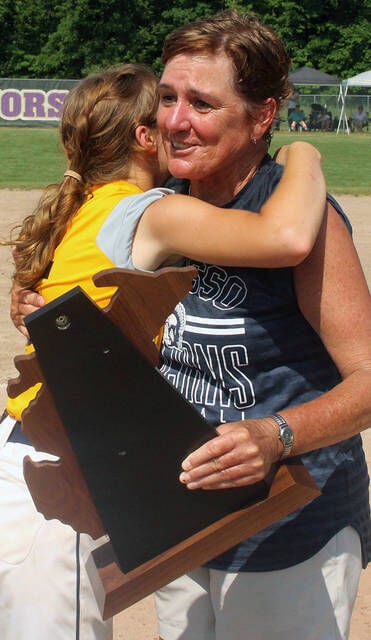 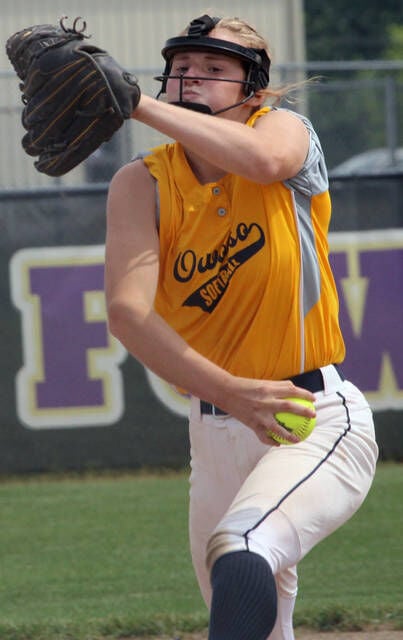 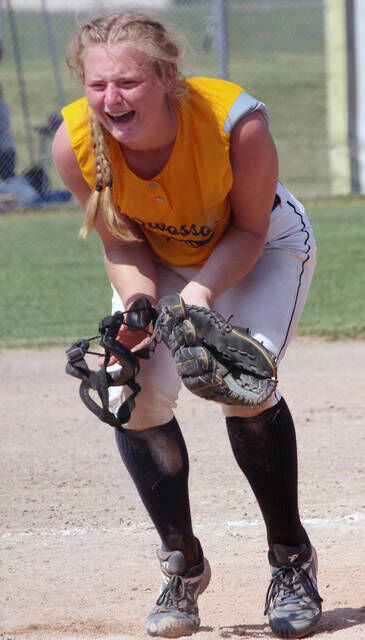 OWOSSO junior pitcher Macy Irelan reacts after striking out the final batter in Owosso’s 6-1 10-inning regional title victory over Lakewood Saturday at Fowlerville. Irelan struck out 32 batters in two games including 20 in the regional title game. 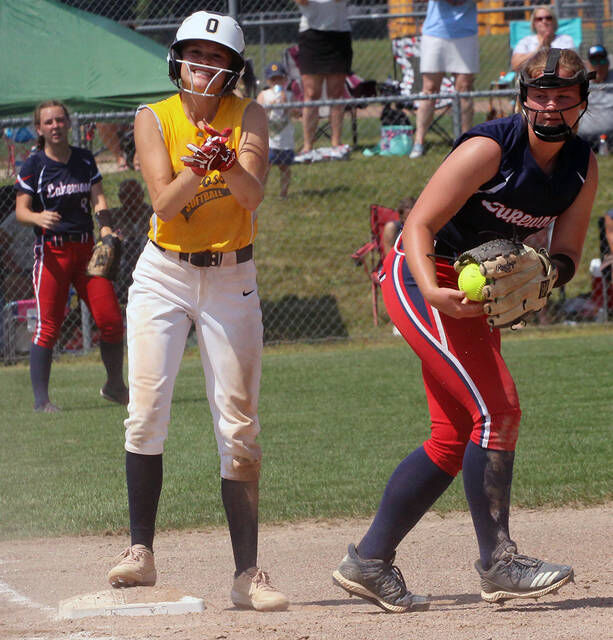 OWOSSO senior outfielder Nevaeh Ginger reacts after stealing third base in the seventh inning vs. Lakewood Saturday. Ginger hit a game-tying double with two outs in the seventh with Owosso trailing 1-0. The Trojans went on to defeat Lakewood in 10 innings, 6-1 for the school’s first-ever regional softball title. Today Owosso battles Wayland in the state quarterfinals at Battle Creek.

OWOSSO junior pitcher Macy Irelan reacts after striking out the final batter in Owosso’s 6-1 10-inning regional title victory over Lakewood Saturday at Fowlerville. Irelan struck out 32 batters in two games including 20 in the regional title game.

OWOSSO senior outfielder Nevaeh Ginger reacts after stealing third base in the seventh inning vs. Lakewood Saturday. Ginger hit a game-tying double with two outs in the seventh with Owosso trailing 1-0. The Trojans went on to defeat Lakewood in 10 innings, 6-1 for the school’s first-ever regional softball title. Today Owosso battles Wayland in the state quarterfinals at Battle Creek.

Owosso won its first-ever regional title Saturday by outlasting Lakewood 6-1 in 10 innings. Owosso coach JoEllen Smith, contacted by telephone moments before Monday afternoon’s practice, said Wayland has a strong tradition and a strong squad that is also led by a talented pitcher.

“I don’t really know a lot about them but I know they’ve been to the state finals before and they’ve won it once or twice,” Smith said. “They have a great program and (coach Cheri Ritz) has been there for 36 years … I anticipate a great game, I really do. I think it will be another pitcher’s duel. I think they will be a better hitting team than we faced (Saturday).”

The winner advances to the semifinals at 10 a.m. Thursday at Michigan State University’s Secchia Stadium. The Owosso/Wayland winner takes on eitther Gaylord (38-1) or Hudsonville Unity Christian (32-7), which play at noon today at Cornerstone University. The other quarterfinal matchups feature Chelsea (36-4) taking on Detroit Country Day (19-4) and Marysville (29-6) battling Linden (33-7).

Gaylord, ranked No. 4 in the state by the Michigan High School Softball Coaches Association, is the highest-ranked team left in the tournament. Linden is No. 6, Chelsea is No. 8, Unity Christian is tied for 10th and Marysville is listed as an honorable mention.

Owosso designated hitter Madyson Rainey, who had two doubles and two singles in Owosso’s regional wins over Haslett (12-0 in five innings) and Lakewood (6-1 in 10 innings), said the Trojans had a productive practice on Monday.

“We worked on defense for certain situations and hitting at like faster speeds,” Rainey said. “I feel like it’s going to be like a 2-1 low-scoring game,” Rainey said.

Smith, who eclipsed 800 career victories this season in her 38th season at Owosso, will face another coaching icon in Ritz, who has more than 900 career wins and 23 district championships. Ritz coached the Wildcats to state titles in 2006 and 2015.

The Trojans will be led by junior right-handed pitcher Macy Irelan, a Kent State University commit who struck out a total of 32 batters at the regional tournament. Irelan allowed four hits, struck out 20 and walked one in Owosso’s dramatic 6-1 come-from-behind win in 10 innings over Lakewood in the regional finals.

Irelan has recorded more than 400 strikeouts and pitched every inning but one this season. Her ERA is well under 1.0.

Irelan had a no-hitter going until Lakewood’s Claire Benham hit a homer to straight away center field with one out in the bottom of the sixth inning. Owosso was down to its last out with nobody on when Kendall Anderson hit a high pop-up that was dropped by Lakewood as three players converged on the ball near the pitcher’s mound.

Nevaeh Ginger then hit a long liner to left that hit the fence for a run-scoring double that tied the game. Owosso won thanks to a five-run outburst in the 10th inning.

Owosso clubbed eight hits against Lakewood pitcher Morgan Stahl, who had no-hit Olivet in a 2-0 win in the regional semifinals. Stahl, who set Lakewood’s career strikeout record this season, struck out 15 Trojans batters.

Wayland edged Edwardsburg 3-1 Saturday in the regional finals at Otsego. Wayland was bolstered by Kennedy Cole’s two-run homer in the third inning, her seventh of the season. Cole, like Irelan, is also committed to play softball at Kent State University.

Emma Ludema was the winning pitcher for Wayland in the regional final. Ludema (20-3) pitched a two-hitter with seven strikeouts. She had 169 strikeouts and an ERA 2.22 heading into regionals.

Owosso has never gotten to the state quarterfinals in softball before, but two Owosso baseball teams have. The Trojans won regional baseball titles in 1976 and 1994.

In 1976, the Trojans, led by sophomore pitching ace Mitch Zwolensky, reached the state semifinals before losing 3-0 to Clarkston and left-handed ace Steve Howe. Howe led Clarkston to the Class A state title before starring at the University of Michigan and later helped the Los Angeles Dodgers win the 1981 World Series. Howe, who died in 2006 at the age of 48 after a pick-up truck accident, was National League Rookie of the Year in 1980.

In 1994, after winning a regional crown, the Trojans defeated Grosse Pointe North 3-0 in the quarterfinals before losing Southgate Anderson 9-2 in the state semifinals at Battle Creek.

Are you satisfied with the results of the special county board meeting?