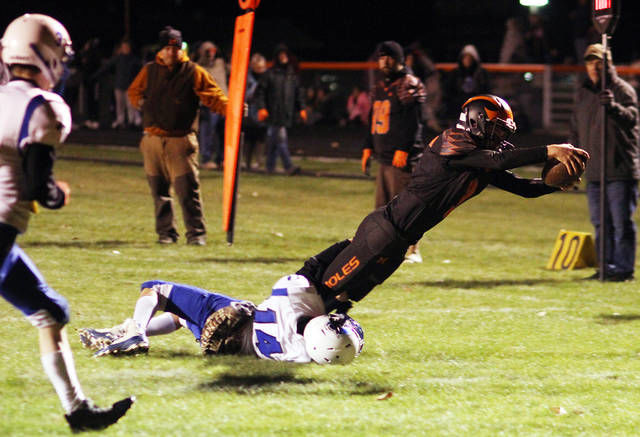 Morrice’s Jonathan Carpenter reaches for the endzone to extend the Morrice lead Friday in a playoff game against New Haven Merritt. 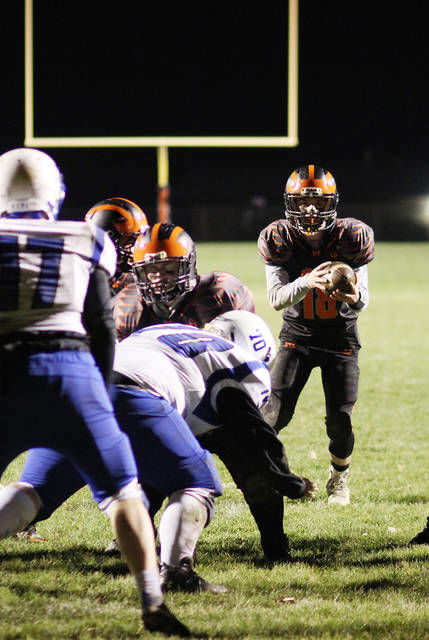 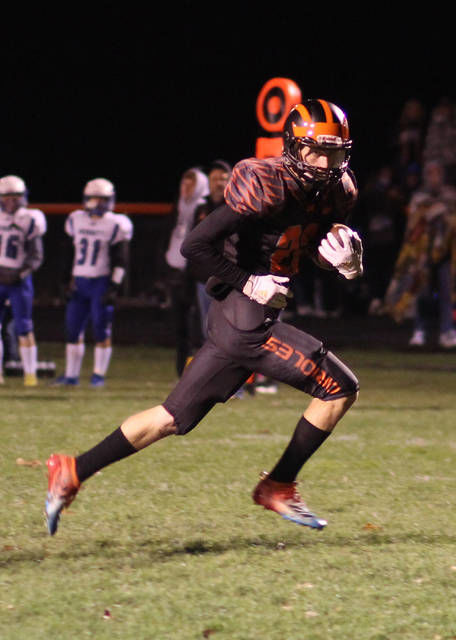 Morrice receiver Shane Cole turns up field after catching a pass Friday from Garrett DeLau. The play resulted in a 34 yard TD at the end of the first half. 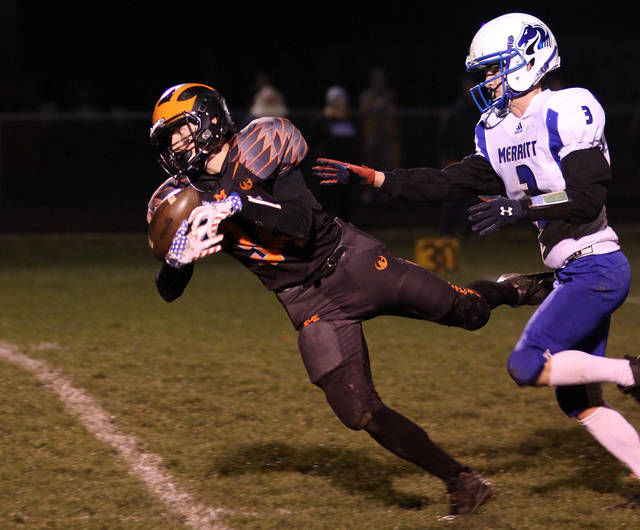 Morrice receiver Jarrett Wood, left, tries to corral a Garrett DeLau pass. Wood lost control of the ball when he hit the ground

Morrice’s Jonathan Carpenter reaches for the endzone to extend the Morrice lead Friday in a playoff game against New Haven Merritt.

Morrice receiver Shane Cole turns up field after catching a pass Friday from Garrett DeLau. The play resulted in a 34 yard TD at the end of the first half.

Morrice receiver Jarrett Wood, left, tries to corral a Garrett DeLau pass. Wood lost control of the ball when he hit the ground

“(When) our defense plays well our team plays well,” Crockett said.. “They swarmed to the ball, they played hard and gave our offense a chance to run the ball.”

Junior linebacker Peyton Smith said the defensive dominance traced back to how the Orioles practiced.

“It goes back to practice and how we prepared throughout the week,” Smith said. “We come in with the mindset that we always have to be ready for the fight ahead, move forward and improve every week.”

Morrice was able to draw first blood, scoring on back-to-back rushing touchdowns to go up 16-0 late in the first quarter.

Following the second Morrice score, Orioles stole back possession on the ensuing Merritt drive with a Kodie Kiczenski interception. But then things took a turn for the Orioles, as their offense became bogged down in penalties and stagnated for most of the second quarter.

Adding to Morrice’s offensive woes was the Merritt defense was beginning to figure out the Orioles’ rushing attack.

So, Morrice changed things up on and started going to the air.

“When they started bringing eight guys into the box we had to make them honor our passing game, so we threw it over the top to loosen up the secondary,” Crockett said.

The adjustment worked as Garrett DeLau was able to connect with Shane Cole on a 34-yard passing touchdown to close the half up 24-0.

In the second half, the Orioles made more adjustments and got back to playing their style of football.

“Their defensive ends were doing some things we weren’t prepared for,” Crockett said. “We had to put a few different blocking schemes into effect, make adjustments and make plays.”

Morrice scored three more times, all on the ground, and completed the shutout.

“It feels great to advance, but we always have to keep that humble mindset,” Smith said postgame.

Next week Morrice will travel to Deckerville with a semifinal berth on the line. Crokett knows there’s one area the Orioles need to improve on going into that game.