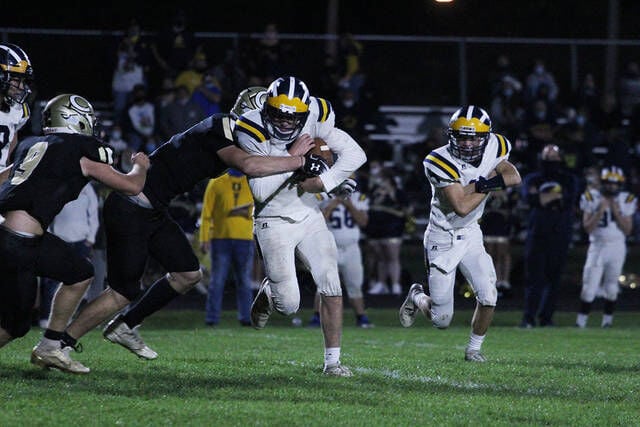 OWOSSO running back Tim Felver is tackled by Corunna defender Nick Steinacker Friday in the first half at Corunna. The Cavaliers blanked the Trojans, 55-0, on Homecoming Night. 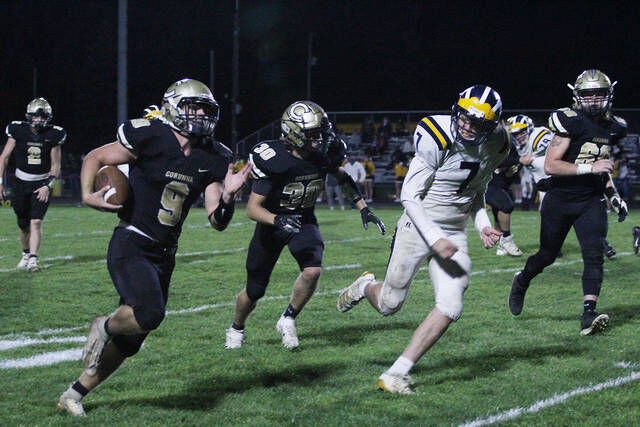 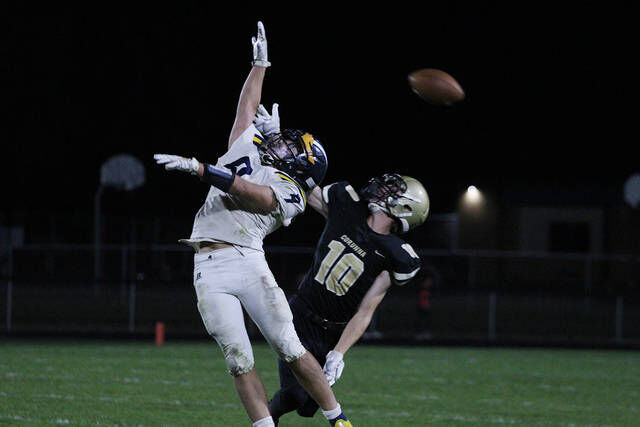 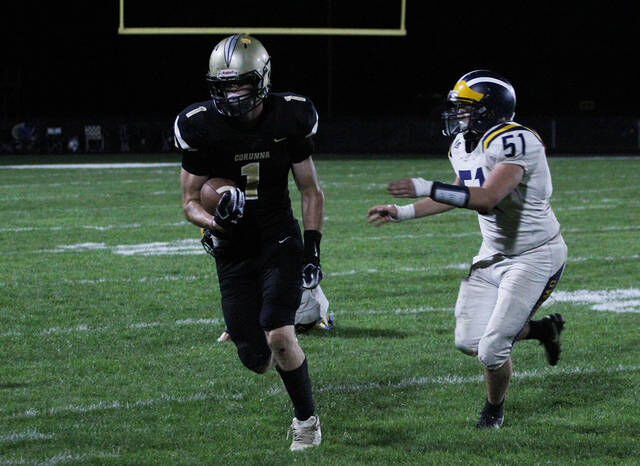 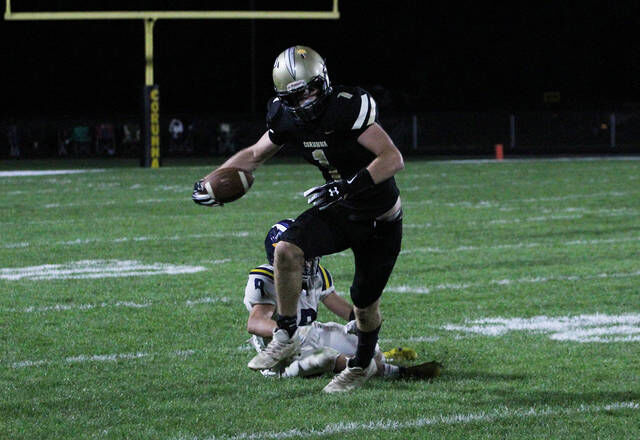 OWOSSO running back Tim Felver is tackled by Corunna defender Nick Steinacker Friday in the first half at Corunna. The Cavaliers blanked the Trojans, 55-0, on Homecoming Night.

Steinacker set a school record with five touchdown catches — four of which were thrown by junior Herrick, who tossed five total for another Cavalier record — as Corunna blanked Owosso 55-0 Friday.

“The game plan was to go in there, play as a team and play for each other,” Steinacker said. “That’s what we did. I’ve got brothers behind me playing for me and that’s how I got the record … It’s a team thing. Everybody broke that record with me. “

Herrick’s first TD in the first quarter pass went to Scout Jones in the flat on a 29-yard pass play. Steinacker ran in the two-point conversion and it was 8-0 Cavaliers. Herrick threw three TD passes to Steinacker in the second quarter and set the record with his fifth to Steinacker early in the second half.

“We just wanted to come out here and play our hardest and beat Owosso,” Herrick said. “It was a great game and a great tem effort and we got the job done.”

Corunna coach Kyle Robinson said Herrick and Steinacker have good chemistry as a quarterback and a receiver and it showed.

“Two of those touchdowns were scramble rules where the route broke down and Jaden was starting to get flushed out of the pocket and Nick adjusted his routes,” Robinson said. “They’ve spent a lot of time together in practice. We tried to play our strong suits and obviously Nick is really good and he’s going to have to continue to do that against all of the other opponents we play.”

Jones was Corunna’s leading rusher with 65 yards on seven carries. Herrick ran for 41 yards and a TD.

Jacob Lloyd had nine tackles including a sack for Corunna. Porter Zeeman had six tackles.

Owosso coach Devin Pringle said his Trojans could not cash in on two scoring opportunities in the first half. Owosso had the ball at the Corunna 4-yard line after a roughing the quarterback penalty. Owosso failed to convert, however, when Shore BeDen’s pass fell incomplete.

Owosso was led by Ted Worthington, with 20 yards rushing on three carries. BeDen went 0-for-2 passing as the Trojans could muster just four first downs all night.

“They dominated us, but the kids came out of the gate in the first quarter and played well,” Pringle said. “The first quarter was 8-0 and we came out and battled. We had a drive down there and we couldn’t finish it. But they beat us physically, emotionally and any way it goes. All the credit to Corunna. We couldn’t stop them.”

If the presidential election was today, who would you vote for?