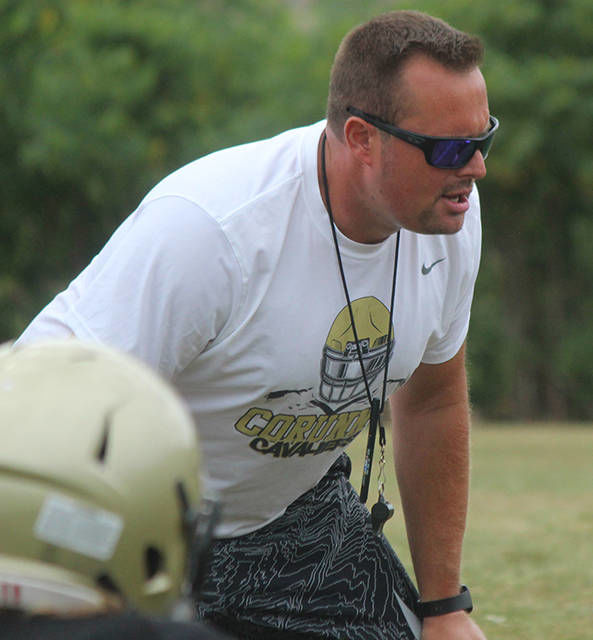 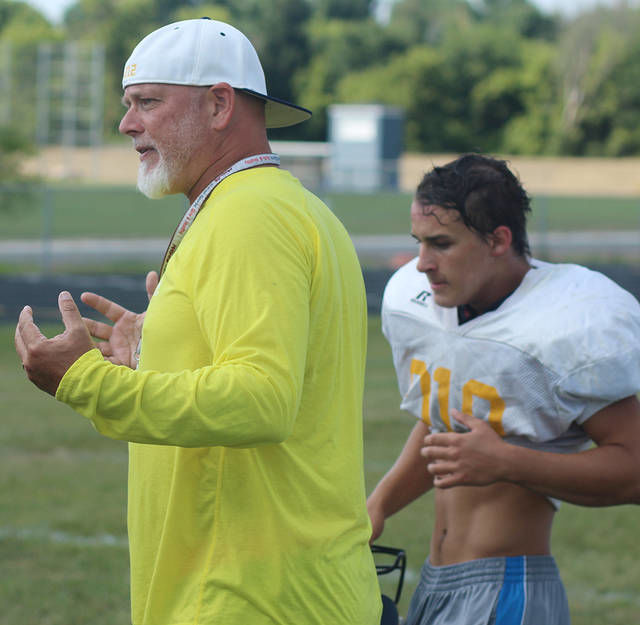 OWOSSO football coach Devin Pringle gets a point across to his team during Day 5 of the high school practice season Aug. 16.

OWOSSO football coach Devin Pringle gets a point across to his team during Day 5 of the high school practice season Aug. 16.

CORUNNA — Fall is a time for new beginnings.

And the changes come in many forms.

Corunna’s Cavaliers — along with past Genesee Area Conference Red members Goodrich and Lake Fenton — are joining the Flint Metro League this fall.

The Flint Metro, which had nine members last season, has expanded to 12 and split into two divisions for most sports — but not all. The Flint Metro I — sometimes referred as the Stripes Division — consists of Fenton, Swartz Creek, Flint Kearsley, Linden, Flushing and Holly. The Flint Metro II (the Stars Division) has Owosso, Corunna, Goodrich, Brandon, Lake Fenton and Clio.

Corunna athletic director Jason Beldyga said joining the Flint Metro was a very attractive decision for a number of reasons, despite being one of the smaller schools in the league.

“One of the benefits of the Metro is their history of professionalism and what they provide for student-athletes,” Beldyga said. “They’re a very organized group, they’re a very detail-orientated group and we feel like that’s something that is really going to help our kids — to grow our culture here. One of the challenges with that is we are one of the smaller schools, but that challenge is something that we welcome. We’re excited to join the Metro and obviously we’re excited to renew some rivalries and to play some local schools like Swartz Creek and Owosso on a more regular basis.”

Beldyga said football, volleyball, wrestling, basketball and track and field will have two divisions, with all other sports having one.

Owosso athletic director Dallas Lintner said the Flint Metro decided to break into two divisions for certain sports such as football because 12 teams meant it would be impossible to play each school.

“It evens it out as far as enrollment is concerned, that was kind of the preface behind the whole expansion of our conference,” Lintner said. “But what it does, obviously, with 12 members in the conference you can’t play everyone, so splitting into two divisions allows you to play a full schedule where you can play everyone you are competing against for the championship.”

“The divisions in the Metro are great for the league,” Pringle said. “Number one, it will provide a little parity in the two groups. Prior to the current system, we had the Flushings and Fentons, they are climbing to be twice as big as a lot of the schools in the Metro.”

So how will having Corunna and Owosso in the same division of the same league affect its football rivalry?

“Not only are we crosstown rivals, now we are added conference rivals,” Robinson said. “And now that game is going to be Week 7. We’re used to be playing each other in Week 1.”

Pringle said the rivalry will be as big as ever given the league game label — though it would be important no matter when it is played.

“The traditional opener has always been fun, but we could have two teams go 0-6 going into that game and believe me, it’s going to matter,” Pringle said.

For the past 12 seasons, the rivalry game has been the season opener for both schools. The Owosso-Corunna game began in 1997 when Owosso was a member of the Mid-Michigan Conference ‘A’ and Corunna played in the MMC ‘B’ — known affectionately as the “MMB.”

Since 1997 each school has played in various leagues, with Owosso returning to the Big Nine Conference for a time before joining the Capital Area Activities Conference. When the CAAC realigned its divisions in 2016, Owosso left to join the Metro League.

Corunna stayed the MMB until the league folded in 2006, then moved to the CAAC White before joining the GAC Red in 2014. The GAC Red was reduced to four teams in 2018 after six schools left to form the Mid-Michigan Activities Conference.

This fall the GAC will have only four teams total — Burton Bendle, Flint Beecher, Flint Hamady and Flint Southwestern.Burton Atherton is moving to eight-man football, and Burton Bentley is playing an independent schedule.

Each Metro League team will have a total of six conference games — five within the division and a sixth crossover contest against the team in the opposite division with the same placement. For instance, the first-place teams from each division will face each other, along with the second-place teams locking horns, and so forth.

The crossover game is played Week 8 and opponents likely won’t be known until after Week 7.

Lintner said in odd-numbered years, the Stars squads will be hosting the crossover games, with Stripes teams hosting in even years.

Corunna will play three nonconference games — two at the start of the season with Hemlock and Fowlerville. In Week 9, the Cavaliers will renew a traditional rivalry with Ovid-Elsie — the first meeting between the two since 2002.

The Hemlock game will mark the first time the Cavaliers and Huskies have met on the football field since 1978, when both were in the MMB. Fowlerville, on the other hand, has been a traditional nonconference foe for Corunna dating back to the early 1990s.

Owosso is the biggest school in the league’s smaller division, though it comes with a caveat — Owosso is no longer considered a Class A school.

The Trojans, who have lost enrollment every year since 2010, are now a Class B school with a listed enrollment of 860 by the Michigan High School Athletic Association.

Owosso will not have to play teams in the larger division for the most part, the exception being a Week 2 contest against Swartz Creek and the Week 8 crossover. Neither game will count in the league standings.

The Trojans’ other nonconference opponents are Lansing Eastern in Week 1 and Stockbridge in Week 9.

The Flint Metro is not the only league this year undergoing changes.

“We had a feeling when we went to our all-league meeting at the end of the season,” Perry football coach Jeff Bott said. “They were pretty up front and honest with us that they were heading in that direction. Three weeks after the season, we knew they were gone, but we planned ahead and got games.”

Bott said the Ramblers were able to schedule a nonconference game in place of Maple Valley.

“It’s tough, because where they’re out, it’s usually a league game,” Bott said. “We were fortunate enough to find Holton, over by Muskegon, who’s going to come here. It wasn’t a fun thing to try and find. Week 7 and 8 are hard to find games.”