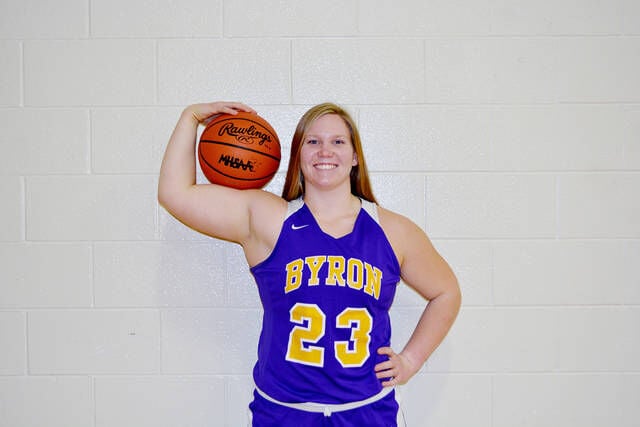 It was a feat neither her mother, Theresa Marvin, or sister, Jessica Marvin, could accomplish when they played for the Eagles, a feeling that often left a sour taste in the younger Marvin’s mouth.

The 5-foot-9 senior guard/forward eclipsed 1,000 points and 1,000 rebounds for her career this season, earning Argus-Press Player of the Year honors for a third consecutive year, but she’s the first to return the conversation to the team, pointing to the back-to-back district championships in 2020 and 2021.

“It was a long time coming, that’s for sure,” Marvin said. “It felt really nice to not only be able to do it once, but do it twice (to solidify) that we were a great team.”

Marvin finished her career with 1,314 points — fifth-highest in area history — and 1,017 rebounds.

“I think the biggest thing that just comes to my mind is the teams that I played on,” Marvin said. “I wouldn’t have been able to do any of that without my teammates over the past four years.”

Marvin contributed on both ends of the floor throughout her senior season, averaging 18.1 points (third in the area) and 12.9 rebounds (first). She dominated in assists with 172, a 7.1 average; New Lothrop’s Brooke Wenzlick was second with 69 (4.0).

“I’ve always just tried to be the most well-rounded player that I can be,” Marvin said. “I personally believe that those players that can get you in every category are the most lethal so that’s kind of what I strive to do on the court, have an effect in every part of the game.”

Theresa Marvin, now Byron’s head coach, described her daughter as “someone we could always count on in the big games.”

“I think as you look at the four years, she has worked hard to get better each year, but even coming in as a freshman she was just that consistent competitor that always delivered and always seemed to be clutch when we needed her,” Theresa Marvin said.

“(Sarah’s) not a kid that’s going to score 40 points in a game, that’s not her thing,” she continued. “Her thing is the total game, right? The rebounding, she’s an outstanding passer, her court vision, execution of the plays, that kind of stuff is what I think really sets her apart.”

Marvin’s competitive drive was on full display throughout her final high school contest as she battled through an ankle injury, and later got poked in the eye, before fouling out with 34.7 seconds left in the game.

“You’d have to take me out on a stretcher; there’s no way that I wasn’t finishing that game,” Marvin said at the time. “It didn’t really matter what happened (out there), I was finishing.”

Marvin’s favorite moment of the season came on Senior Night as longtime friend and teammate Abby Thomas took the floor for her first varsity appearance. Thomas has Rett Syndrome, a rare neurological disorder that impacts many aspects of every day life, but it never diminished her support for the Eagles.

Making the most of her opportunity, Thomas scored four points in the Feb. 17 Senior Night victory over Webberville. It was her first in-game appearance since eighth grade, though she’s remained a fixture at practices and on the bench during games.

“It was just incredible,” Marvin said. “The season could have ended after that game and I would have been happy because we were finally able to do something for her. She does so much for our program and our team.”

Marvin will continue her athletic career at the University of Michigan this fall, competing in shot put and discus on the track and field team. She plans to major in movement science.

Player of the Year

The 6-foot junior forward averaged 21.6 points and 10.7 rebounds per game for the Cavaliers, adding 2.1 assists 2.1 steals and 1.2 blocks. A first-team all-Flint Metro League Star, Toney ended the season 39 points shy of 1,000 for her career and will have a legitimate shot at Allison Gross’ all-time record (1,269) as a senior.

Clement drained a team-high 30 3-pointers, trailing only Ovid-Elsie’s Caitlyn Walter (38) for most in the area. The senior guard/forward, a first-team all-MMAC selection, averaged 15.9 points, 6.4 rebounds, 3.9 assists and 3.0 steals per game for Byron. She passed the 1,000-point milestone this season and finished her career as Byron’s third all-time leading scorer (1,064) behind Marvin and Calla Bartlett (1,116).

Wenzlick led the area in total points (352) and steals (81) this season, averaging 20.7 and 4.7 per game, respectively. The senior guard, a first team all-MMAC selection, eclipsed 1,000 points for her career and averaged 4.0 assists and 4.1 rebounds per game. Wenzlick joins Sarah Marvin (Byron), Valerie Smith (Owosso), Sarah Warner (New Lothrop), Megan Birchmeier (Corunna), Long, and Alexis Ayala (Durand) as the only players to have three first-team All-Area selections. She is third on New Lothrop’s all-time scoring list with 1,254 points and eighth in area history.

Gillett was a first-team all-Flint Metro League selection, averaging 13.9 points, 5.9 rebounds and 2.8 assists and 2.4 steals per game. Through her sophomore season, Gillett has 422 career points.

The senior first-team all-MMAC selection averaged a double-double with 11.6 points, 10.5 rebounds and 2.0 assists per game for the Indians, adding 2.0 steals and 1.7 blocks.

Walter led the area in 3-point shooting with 38 made 3s. The first-team all-MMAC selection averaged 11.3 points, 1.5 assists and 2.5 steals per game for the Marauders.

The first-team Genesee Area Conference selection averaged 12.1 points, six rebounds and two assists per game for the Orioles, along with 2.7 steals as a freshman