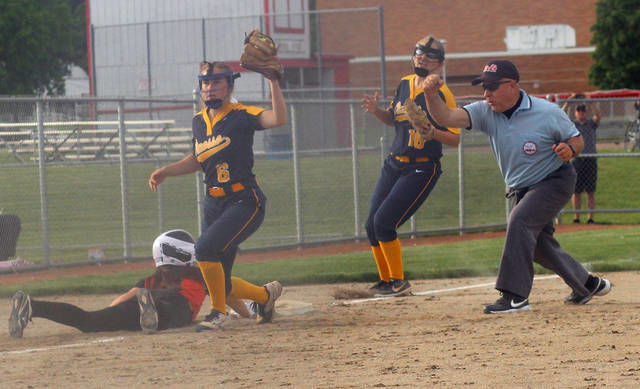 OWOSSO third baseman Allie Langdon holds up her glove after tagging out Alma baserunner Trinity Sherwood, left, who was trying to get back to third but was thrown out by Owosso catcher Rose Alman. Owosso shortstop Clover Brandt, second from right, looks on. Alma nipped Owosso 1-0 in Monday’s Division 2 district championship game at St. Johns. 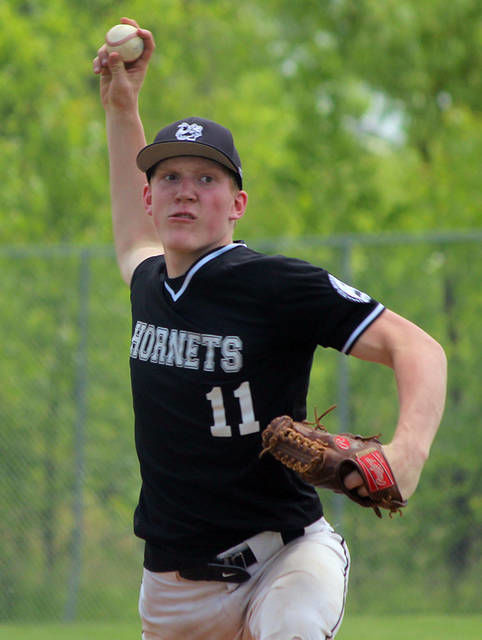 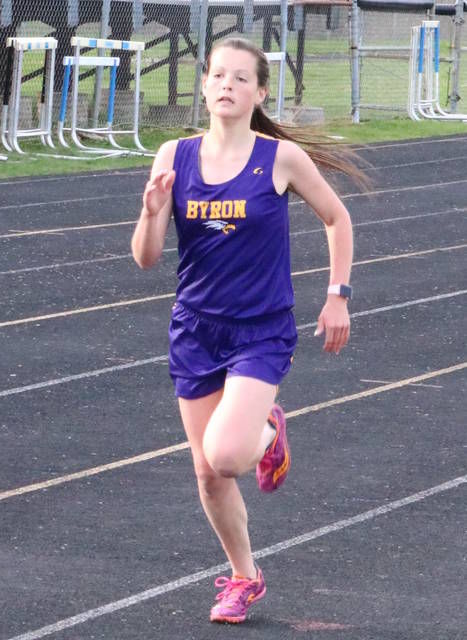 Olivia Krejci of Byron has a comfortable lead down the stretch en route to winning the 3,200-meter run at New Lothrop High School on Tuesday.

OWOSSO third baseman Allie Langdon holds up her glove after tagging out Alma baserunner Trinity Sherwood, left, who was trying to get back to third but was thrown out by Owosso catcher Rose Alman. Owosso shortstop Clover Brandt, second from right, looks on. Alma nipped Owosso 1-0 in Monday’s Division 2 district championship game at St. Johns.

Olivia Krejci of Byron has a comfortable lead down the stretch en route to winning the 3,200-meter run at New Lothrop High School on Tuesday.

With schools closed until at least April 13 — and possibly for the remainder of the school year — due to COVID-19, area high school spring sports athletes have had to stay in shape on their own.

Even gyms and fitness centers have been closed.

Along with trying to remain fit in the hope their season might eventually start at a later date, some student-athletes have also had to cope with the mental anguish and uncertainty of knowing that their final sports season might be canceled altogether.

Owosso softball player Allie Langdon, a senior third baseman, has been doing a lot of running and hitting on her own and taking grounders when she can.

“I just went on a run and I’m hitting off the tee and just going up to the field close to my house and having my parents hitting grounders and stuff like that,” Langdon said. “Before the stay-at-home act was put in place, though, we could as a team organize practices ourselves — without the coaches there, of course. So we were all together and doing fieldwork and stuff together and hitting practices.”

Langdon said she has tried to remain positive about the season starting, but at the same time she is realistic that it might not.

“I, mentally, really do want to play,” she said. “And I really hope we’re able to get some sort of season in. But it is depressing to keep reading the articles on (Michigan Governor) Gretchen Whitmer talking about ending our school year. And that wouldn’t give us a chance to do so. I read that yesterday and it brought me to tears because some of us aren’t going to continue and go on and play at the next level. So this was our last time. And I never thought that actually my last game was going to be my last time. I’m really hoping that we’re able to get out there again.”

Langdon said she will continue her education at Grand Valley State University to go into teaching.

Claire Greenfelder, a senior track and field athlete at Chesaning, has been trying to keep her arms and shoulders strong for throwing.

“I’m doing a lot of at-home body weight workouts because I don’t have a lot of weights more than 15 (pounds) to work out with,” Greenfelder said. “I’m doing a lot of air-squats, ab-workouts, things to keep the muscles there … I’ve also been working at my father’s store (Ace Hardware in Chesaning) and moving around large salt bags — which helps my upper body strength.”

Greenfelder qualified for the Division 3 state finals in both the discus and shot put last year, placing ninth and 23rd, respectively.

She missed being All-State in the discus by one place — a total of 5 inches.

“It really scares me that this is my last season and it possibly might not happen,” Greenfelder said. “I’ve worked really hard the past couple of years to make it to states in track and I came really close last year (in the discus). And it really hurt, but in that moment I felt like it would happen the next year.”

Greenfelder will continue her athletic career at the collegiate level — she will be a member of the women’s rowing team at Eastern Michigan University. She said she is keeping the bigger picture in mind.

“How I mentally make myself sane is knowing that I will continue doing sports in college and that keeping everybody safe is so important — more than competing in a track meet,” Greenfelder said.

Brady Birchmeier, who hit .496 last season for the 29-10-1 New Lothrop baseball team as a catcher, pitcher and first baseman, is just a sophomore. He is hoping to get back on the field soon — whether it be this spring or summer.

“My summer team is Michigan College Connect,” Birchmeier said. “And every day, our coach sends out a workout that we follow with weekly workouts, things that we do every day. We have hitting we do and weighted ball programs that we’re all doing right now. I’ll hit with my dad or my sister or my mom.”

Birchmeier said he is hopeful that the games will resume.

Cam Orr, also a catcher and pitcher for the Hornets who recently captured an individual state championship in wrestling, said he does a lot of weight lifting at home.

“Fortunately, I have a weight bench and equipment at home that I can work with,” Orr said. “And that really helps me keep my body in shape. And I also go out into the yard and throw with my little brother. And also just kind of running up the road a couple of miles — and I’m trying to stay in shape and hopefully the season comes around.

“I bought a net and a tee and I’m just hitting every day. We’re just hoping and praying for the best.”

“It’s been a bummer but I’ve been trying to stay positive,” she said. “I run six days a week and some days I do long runs, sometimes I try to do intervals — more like a speed workout … I just keep running.”

Lilly Bower, who helped the Corunna girls track and field team win the Division 2 state track championship last spring, has been sprinting at home. Bower, a junior, was a member of the Cavaliers’ 400-meter relay team which placed first in the state and she is determined to stay in shape.

“Since we can’t do anything together or as a team, I’ve just been doing sprint workouts in my front yard and back yard,” Bower said. “I’ve been doing our warm-ups that we usually do at practice, like the 40-meter flys, just to keep up my endurance if we go back. I’m trying to do as much as I can. I’m hoping it can happen, but I don’t think a lot of us know what the future holds.”