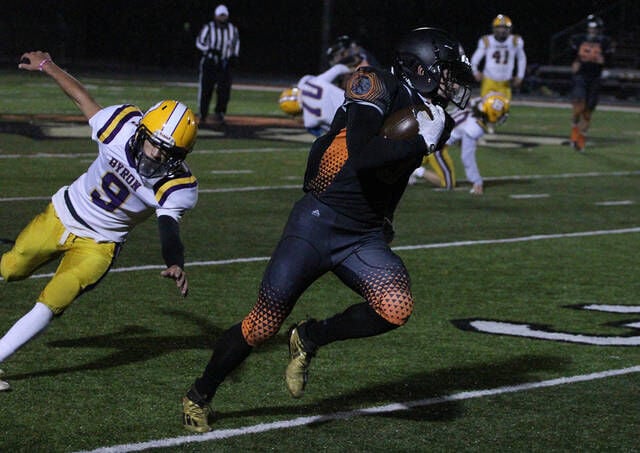 CHESANING’S MATT WARBY runs past Byron defender Canyon Butterfield (9) with one of his five catches Friday night. The Indians won, 45-8. 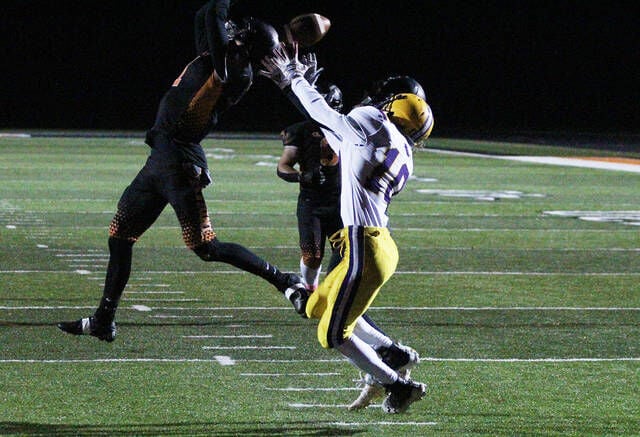 BYRON receiver Caden Aldrich, right, can’t reach this pass in the end zone as it was broken up by two Chesaning defenders Friday at Chesaning. The Indians won, 45-8. 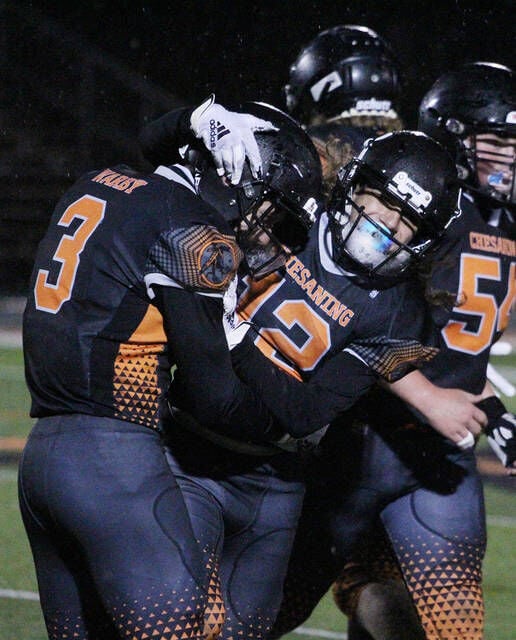 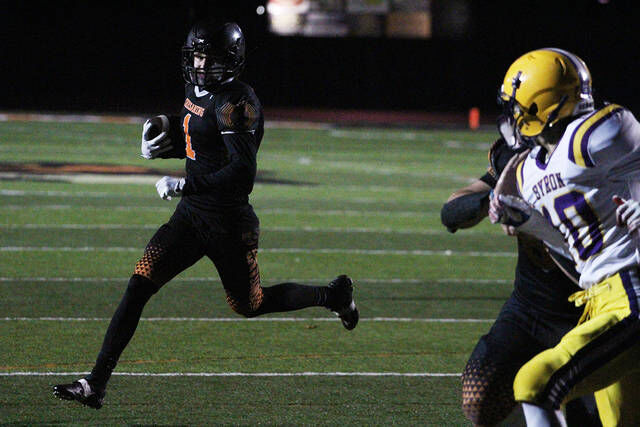 CHESANING’S Alex Thiel, left, scores on a 5-yard scoring run in the second half vs. Byron Friday. Thiel scored twice and the Indians won on Senior Night, 45-8.

CHESANING’S MATT WARBY runs past Byron defender Canyon Butterfield (9) with one of his five catches Friday night. The Indians won, 45-8.

BYRON receiver Caden Aldrich, right, can’t reach this pass in the end zone as it was broken up by two Chesaning defenders Friday at Chesaning. The Indians won, 45-8.

CHESANING’S Alex Thiel, left, scores on a 5-yard scoring run in the second half vs. Byron Friday. Thiel scored twice and the Indians won on Senior Night, 45-8.

Chesaning used speed on the outside to beat Byron, 45-8, on Senior Night. Two of the biggest burners were Indian seniors Matt Warby and Alex Thiel.

Byron, without the services of seven starters due to injuries, fell to 1-4 in the MMAC and 1-4 overall.

“It was nice to see some kids be athletes in space and make plays,” Chesaning head coach John Mimranek said. “At the same time, we have to reduce the number of self-inflicted penalties.”

Chesaning junior quarterback Tyler Sager completed 9 of 22 passes for 236 yards and two scores. Warby had five catches for 136 yards and one score.

Nick Fowler rushed for 93 yards on a TD while Thiel ran for two scores while picking up 73 yards.

The Indians had a pair of touchdowns called back due to offensive penalties but it didn’t really matter. There was just too much speed for the Eagles.

First-year Byron coach A.J. Morley praised his team for gutting it out despite a very low number of players available.

“We were short-handed, we only had 16 guys playing tonight,” Morley said. “We had some injuries and suspensions. It is what it is. The guys we had on the field battled hard. We drove the ball down the field the first time we had the ball but we didn’t have the subs to put in when we needed to.”

Chesaning broke a scoreless tie on the final play of the first quarter. Sager swung a screen pass to the right to Warby, who sprinted for a 35-yard score untouched.

“It was a bandit and a buddy on the team (tight end Alex Amman) made a good block and it opened it up for me to run down the field,” Warby said. “Speed kills.”

The Indians came right back after Zack Marzluft’s fumble recovery on the Byron 32. Fowler found daylight and scored from 32 yards out with 10:40 left in the half.

“It was run first, open up the pass and play as a team,” Fowler said. “And we got the win.”

Chesaning made it 21-0 at intermission as Warby dashed 36 yards for another TD.

In the second half, Chesaning scored on its first play from scrimmage. Thiel darted his way for a 53-yard scoring run 11 seconds in.

The Indians scored three more times — getting a 35-yard catch from Dave Smith, a 5-yard run from Thiel and a 23-yard field goal by Ike Guziak.

“We used our speed to our advantage and we got to the outside,” Thiel said.

Byron’s only points came on senior Nolan Lange’s 55-yard touchdown grab from a Seth Alick pass to the post with 3:14 left.

“It was just one play,” Lange said. “The coach asked me,’Can you get open?’ I said ‘yeah.’ We just ran the wheel and I got open and caught the ball and it was like that.”

Lange had three catches for 76 yards. Caden Aldrich and Lange each rushed for 25 yards for the Eagles.

Chesaning’s defensive ringleader was Ryleigh Qualls with 11 tackles including one sack.

Ty Gross had seven stops and Aldrich also had seven tackles for Byron.

Would you take a less effective COVID-19 vaccine if it was offered?