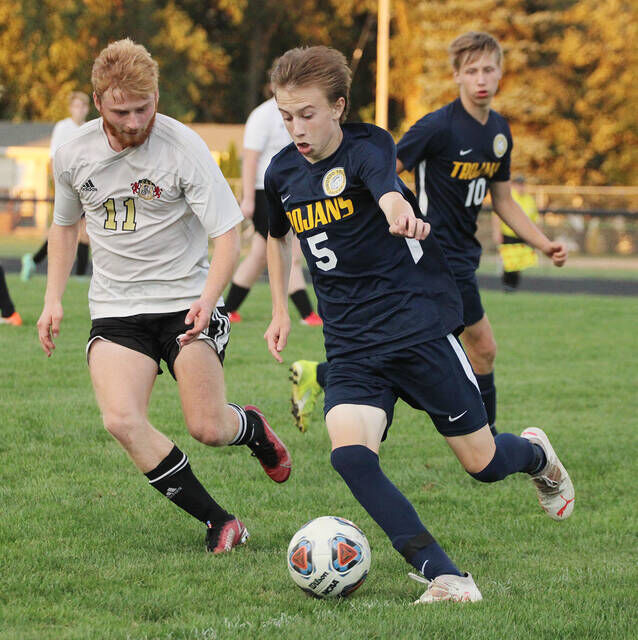 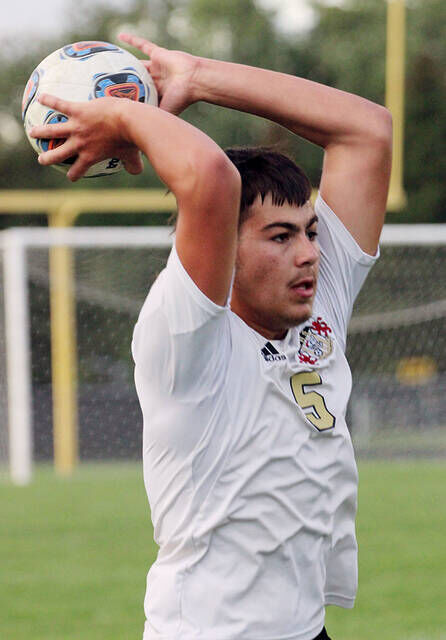 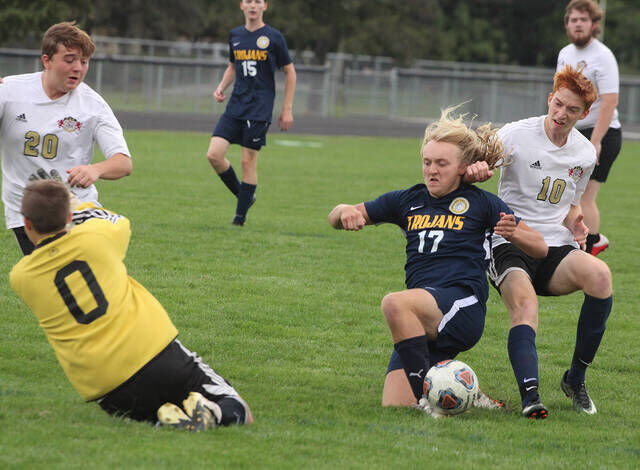 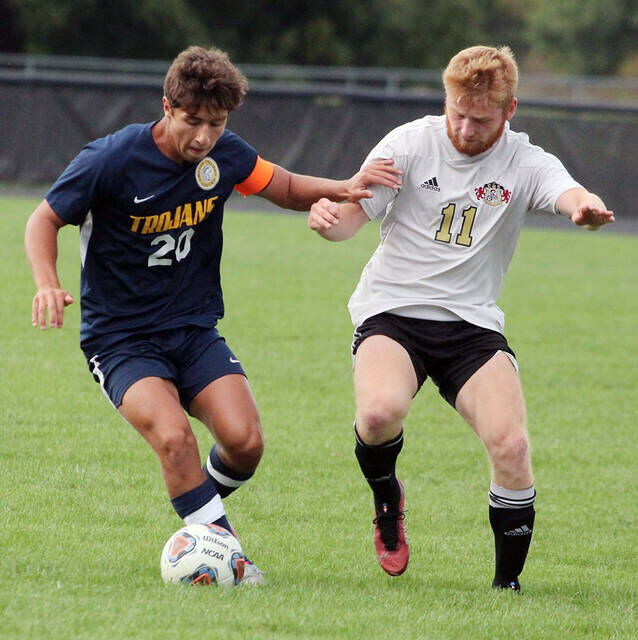 Owosso’s Hunter Babcock, left, tries to get around the defense of Corunna’s Luke Tuller, right, Wednesday at Corunna. Babcock had one of Owosso’s goals during a 3-1 victory over the Cavaliers. 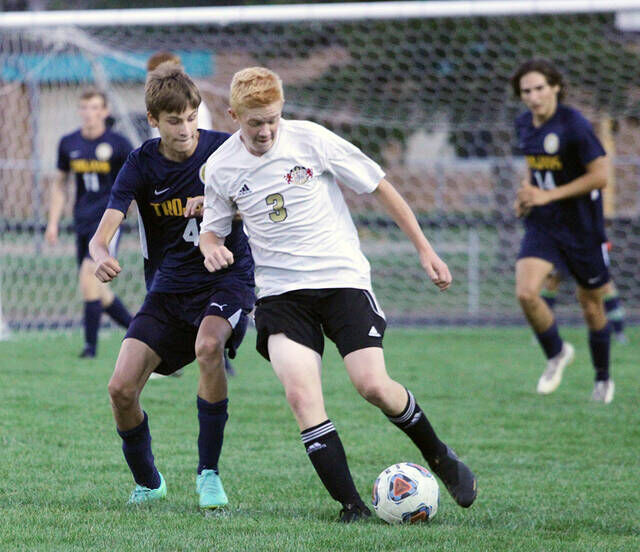 Owosso’s Hunter Babcock, left, tries to get around the defense of Corunna’s Luke Tuller, right, Wednesday at Corunna. Babcock had one of Owosso’s goals during a 3-1 victory over the Cavaliers.

CORUNNA — Freshman Simon Erfourth and senior Noah Feinhauer scored 10 minutes apart early in the second half and Owosso held on for a 3-1 win Wednesday over rival Corunna.

Corunna cut the deficit to 2-1 with just over 7 minutes left when senior Luke Tuller converted a penalty kick to the left corner of the net. The Cavaliers had a few chances to tie the game up, but the Trojans got an insurance goal from Hunter Babcock in the 78th minute. Babcock, receiving a pass from Ryan Dahl, flipped in a short goal to the right corner.

“Corunna definitely came with a different kind of intensity than the last time that we saw them,” Owosso coach Phil Gobel said. “I’ve got to give them that. Definitely in the first half, I don’t think our touch was dialed in to where it needed to be and we made some adjustments in the second half. We were able to put some things together, which led to some goals.”

Brennen Baran made four saves for the Trojans (5-1-1, 2-0-1 Flint Metro League). Corunna goalie Paul Galesk made 10 saves as the Cavaliers fell to 1-4 overall and 0-3 in the Flint Metro.

Owosso owned a 13-5 advantage in shots on goal, but was frustrated for the first 48 minutes. Gobel said his team was finally able to capitalize on scoring opportunities, but credited Corunna for making things difficult.

“All we asked them to do was to play their hardest and we wanted to be competitive in every single game and I was extremely happy with our performance tonight,” Gregoricka said. “Every one of our players should be holding their heads up high.”

Owosso senior midfielder Charles DeWeese said it was a typical hard-fought Owosso-Corunna game. DeWeese said the second half was the difference.

“We came out a little lazy in the first half,” he said. “We put the pressure up in the second half and it showed. Corunna played really well.”

Owosso broke a scoreless tie when Erfourth scored his sixth goal of the season in the 49th minute off a pass by fellow freshman Matthew Shattuck.

“There was a pocket of space and it was like they all kept dropping off,” Erfourth said. “I just had Matthew lay it off. I knew it was going in. I’ve done it enough times.”

Owosso made it 2-0 in the 59th minute when Feinauer converted a pass from Erfourth.

“That really made them mad,” Tuller said. “It did hit (Baran’s) hand but it still went in. I hit it hard and I made sure it went in.”

Tuller said Corunna has been determined to play with an increased intensity this season and Tuesday’s game was evidence of that.

“We came out strong and frustrated them and I think we surprised them a little bit,” Tuller said. “But we really wanted to do something tonight and I think we showed that.”

Gregoricka said holding their opponents scoreless in the first half is always a goal.

“One thing we talk about every game is we want to shut them out in the first half,” Gregoricka said. “Because it’s going to get them to adjust and make adjustments and change what they came in and tried to do.”