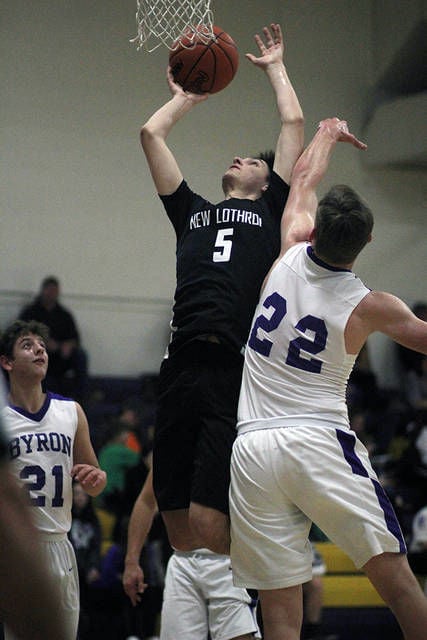 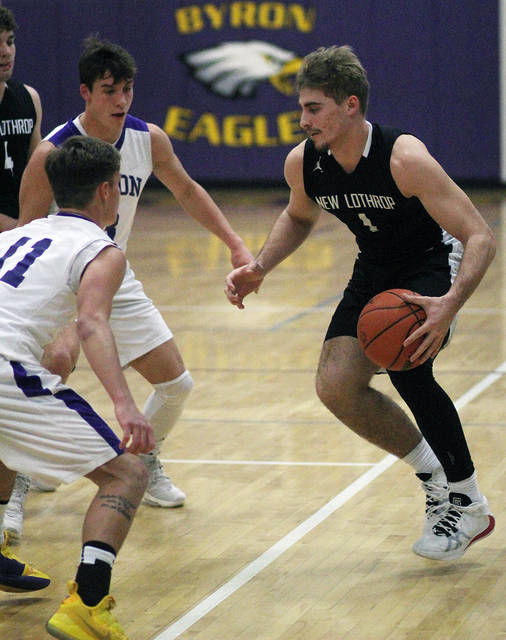 NEW LOTHROP’S AVERY MOORE, right, drives against Byron’s Braden Hoffman, left, and Josh Green, center, Tuesday at Byron. The Hornets beat the Eagles, 61-38, to improve to 7-0 and 6-0 in the MMAC. 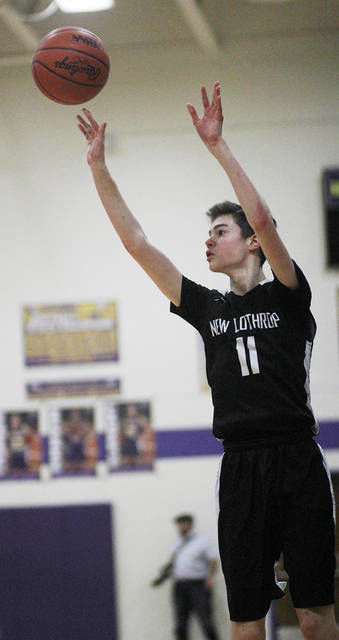 NEW LOTHROP’S Ty Kohlmann sinks one of his three 3-pointers Tuesday against Byron. 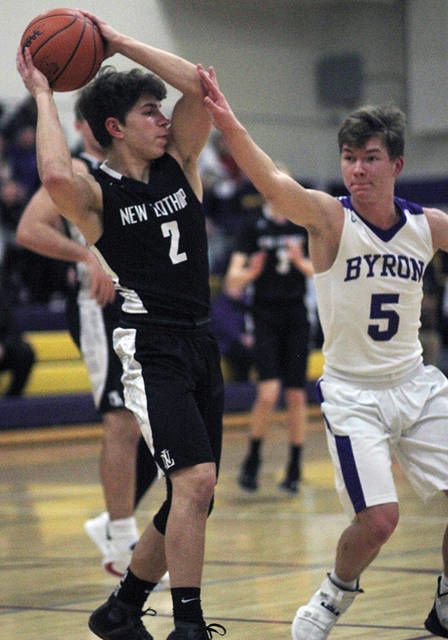 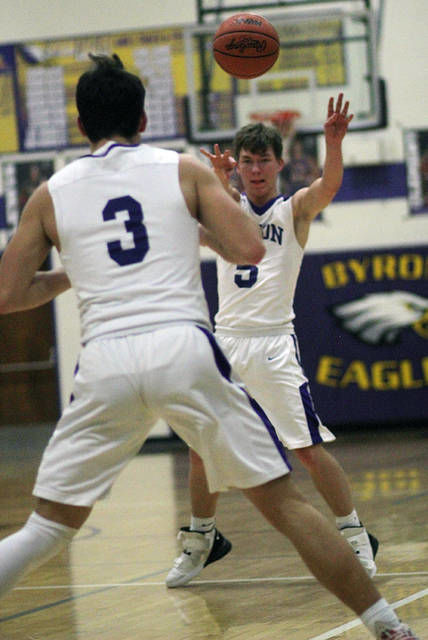 NEW LOTHROP’S AVERY MOORE, right, drives against Byron’s Braden Hoffman, left, and Josh Green, center, Tuesday at Byron. The Hornets beat the Eagles, 61-38, to improve to 7-0 and 6-0 in the MMAC.

NEW LOTHROP’S Ty Kohlmann sinks one of his three 3-pointers Tuesday against Byron.

BYRON — Dynamic defense, an aggressive fast-break and balanced scoring have proven to be winning ingredients for the New Lothrop boys basketball team.

The Hornets got all three again Tuesday while turning back Byron 61-38 to rise to 7-0 overall and 6-0 in the Mid-Michigan Activities Conference.

“That was our best game of the year to this point,” New Lothrop head coach Brady Simons said. “We have played some good basketball in spurts this year, but we have really been focusing on being more consistent and playing a complete game at both ends of the floor for 32 minutes. Tonight we did that. Our defense was outstanding and really set the tone early in the game. We were able to create a lot of steals that led to fast break baskets and that gave us the fast start we were looking for.”

The stage is now set for New Lothrop to collide with another MMAC unbeaten Friday at Ovid-Elsie. The Marauders (7-0, 6-0) beat Mt. Morris 56-46 Tuesday.

Byron coach Kyle Hopkins said his team made too many turnovers and too many bad passes for his liking.

“I don’t know how many turnovers we had off-hand, but I know there were a lot and most of them were unforced, I think,” Hopkins said. “We made some lazy passes and they hit their shots early.”

Birchmeier scored nine points in the first 31/2 minutes as the Hornets built a 12-3 lead. That ballooned to 33-16 by halftime as Kohlmann hit a pair of 3s and scored eight points in the second quarter.

The Hornets opened the third with a 10-0 run fueled by 3-pointers from Moore and Richardson and two breakaway layups.

New Lothrop led by as many as 30 on two separate occasions.

“When we get all the team together and work together it works really well,” Birchmeier said. “We get a lot of steals and keep our arms up, it creates a lot of havoc on defense. It just works out well. But we’ve got Ovid-Elsie on Friday and that will be a big game.”

Moore, who anchors the back row of the Hornets 2-3 zone, said New Lothrop utilized its quickness and aggressiveness on defense and turned that into points.

“We just say, ‘Keep our hands out and keep them wide,’ Moore said. “We try to close up the passing lanes. That makes it a little difficult for them.”

At the other end, Moore said the key was attacking the basket.

“Score, take shots, drive to the lane and be aggressive with the ball,” he said.

Simons said he has been impressed with the team’s scoring balance so far — New Lothrop has had a different leading scorer in five of its seven contests.

“We have had four to five guys averaging nine to 10 points,” he said. “Tonight was a perfect example of that. This group is so team oriented. They share the ball as well as any team I’ve ever coached.”