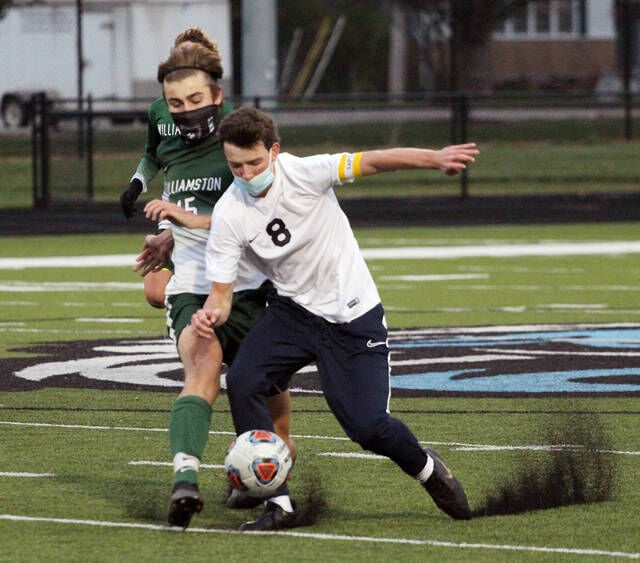 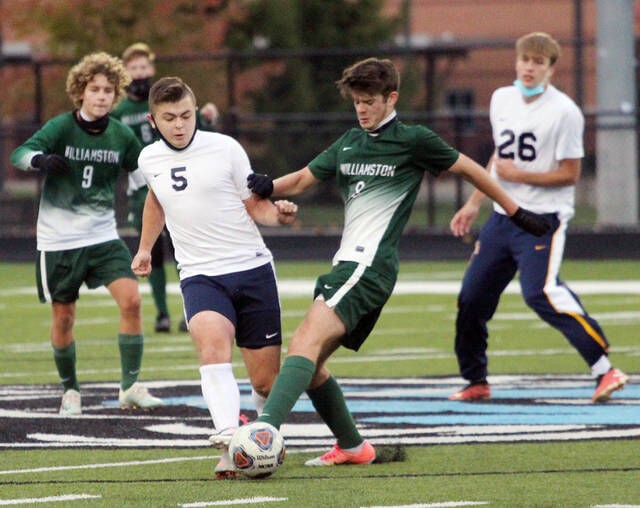 OVID-ELSIE senior Camren Cuthbert, second from left, battles for the ball against Williamston’s Tommy Drake, second from right, Tuesday during a Division 3 district semifinal at Lansing Catholic. The Hornets won, 6-0. 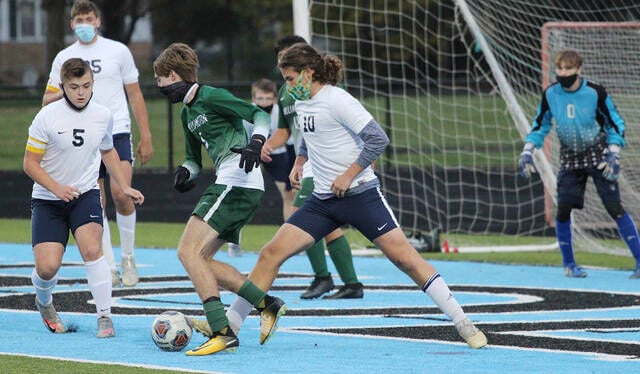 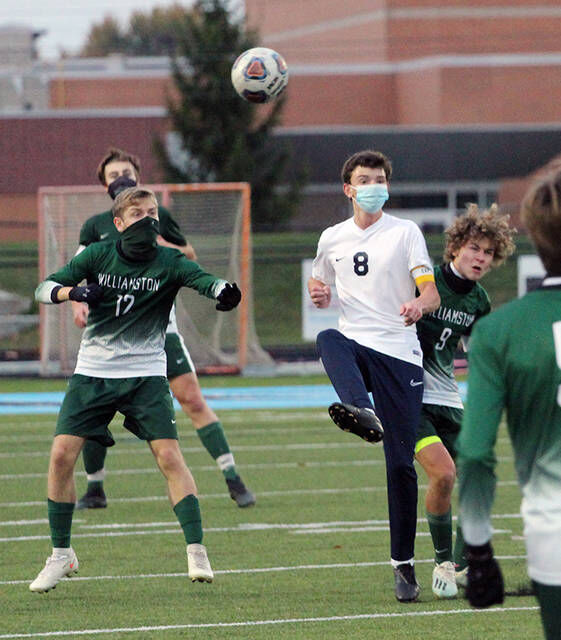 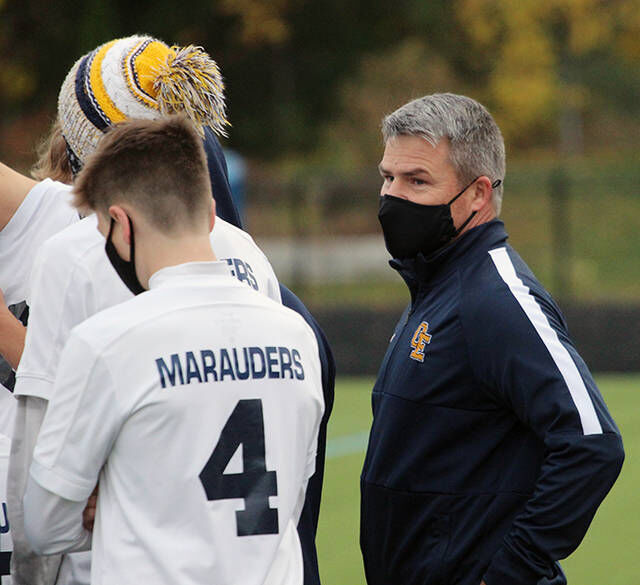 OVID-ELSIE senior Camren Cuthbert, second from left, battles for the ball against Williamston’s Tommy Drake, second from right, Tuesday during a Division 3 district semifinal at Lansing Catholic. The Hornets won, 6-0.

LANSING — Williamston possessed the ball for most of Tuesday’s Division 3 district semifinal.

The Hornets — a team built on discipline, passing and speed — owned a 19-2 advantage in shots on goal and it paid off as Williamston blanked Ovid-Elsie 6-0 to earn a berth in Thursday’s Division 3 district championship game against Lansing Catholic.

The Hornets (9-6) led 2-0 at halftime and then scored four times in the second half. Ovid-Elsie’s season ended with a 9-3-1 record, highlighted by the team’s fifth straight conference championship.

Ovid-Elsie coach Justin Fluharty praised the play of Williamston. He said the Hornets are much stronger than their record would suggests.

“I looked at their schedule and they are playing some (Division 2) teams and I’m sure a couple of (Division 1) teams and they hung in every one of their games — they didn’t get blown out,” Fluharty said.

Fluharty said his squad played pretty well defensively in the first half, but just could not get any offense going.

“My first goal was to play defense and then I see, now we have to try and figure out offense,” Fluharty said. “And we tried to work it in to get more pressure up top. And it worked a little bit. But they had really good possessions. We’ve only played one team close to this — Ionia — and they lost to Williamston, 5-2.”

Williamston had the ball so often in Ovid-Elsie’s end that the Marauders’ two shots on goal came in the 80th minute of play.

Fluharty said with the 2020 season in doubt at first due to the COVID-19 pandemic, he was glad his players were given the chance to even play.

“At the beginning of the year, I wasn’t sure I had a team,” Fluharty said. “And now we’re here. So it was a good time.”

A 1-0 victory over Byron gave Ovid-Elsie the Mid-Michigan Activities Conference championship — and that’s a memory his team can cherish throughout the years, Fluharty said.

Williamston broke a scoreless tie in the game’s ninth minute on Palmer’s first goal. Tommy Drake’s goal with 12:43 left in the first half made it 2-0.

The Hornets scored in the first 20 seconds of the second half to make it 3-0 as John Hart scored in front of the net.

Williamston tacked on three more goals, in the 53rd minute, the 62nd minute and the 74th minute.

Ovid-Elsie senior midfielder Jackson Thornton, who had one of the Marauders’ shots on goal, said Williamston proved that it is a premier team with its performance.

“They were just well-coached. I mean, they passed the ball extremely well,” Thornton said. “We weren’t pressuring sometimes and they had premiere players all around.”