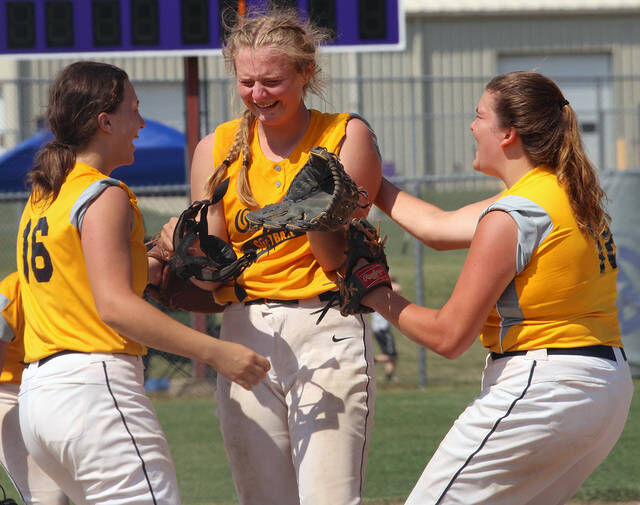 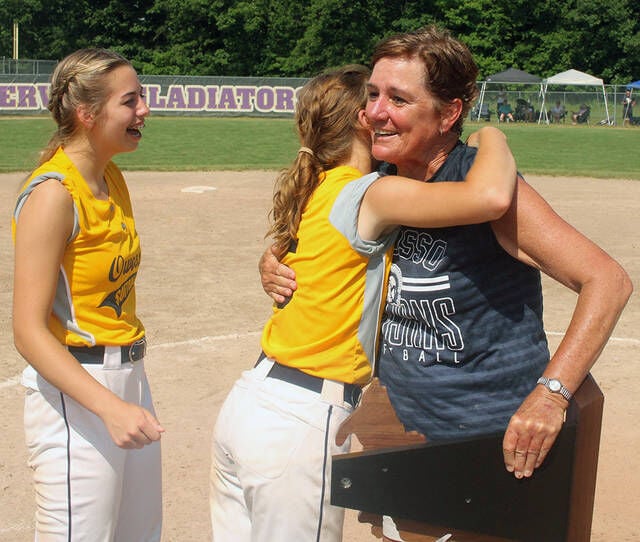 Owosso head coach JoEllen Smith, right, is hugged by Trojan Nevaeh Ginger while holding the Division 2 regional championship trophy Saturday at Fowlerville. Owosso (34-3) won its first-ever regional softball title with a 6-1 victory in 10 innings over Lakewood. Smith has coached Owosso the past 38 years. 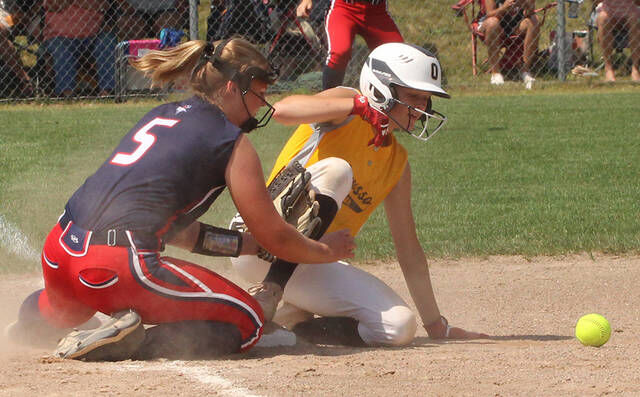 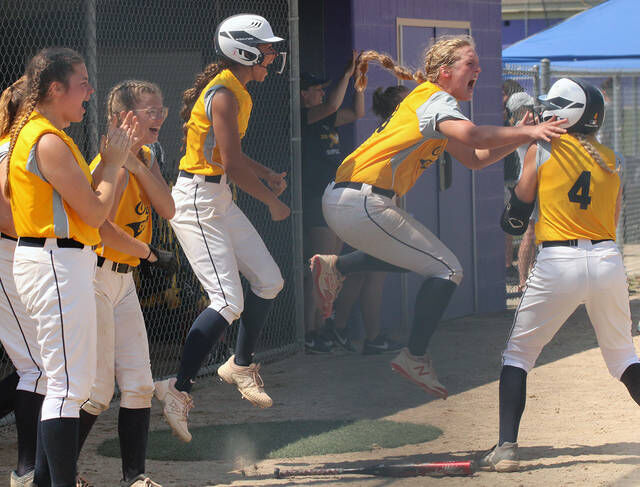 Owosso players react from the bench after tying the score 1-1 in the seventh inning against Lakewood during Saturday’s Division 2 regional championship game at Fowlerville. Owosso went on to collect a 6-1 win in 10 innings for the school’s first-ever regional softball title.

Owosso head coach JoEllen Smith, right, is hugged by Trojan Nevaeh Ginger while holding the Division 2 regional championship trophy Saturday at Fowlerville. Owosso (34-3) won its first-ever regional softball title with a 6-1 victory in 10 innings over Lakewood. Smith has coached Owosso the past 38 years.

Owosso players react from the bench after tying the score 1-1 in the seventh inning against Lakewood during Saturday’s Division 2 regional championship game at Fowlerville. Owosso went on to collect a 6-1 win in 10 innings for the school’s first-ever regional softball title.

FOWLERVILLE — Down to its last strike of the season, Owosso desperately needed a hit to stay alive against Lakewood Saturday in the regional championship game.

Junior pitcher Macy Irelan struck out 20 and walked just one while pitching a four-hitter and Owosso eventually broke through for five runs in the top of the 10th inning for a 6-1 victory. The win earned JoEllen Smith, the Trojans’ coach for the past 38 seasons, her first regional championship.

Senior first baseman Reyn Tuttle, who lined a two-run single in the 10th to give Owosso a 3-1 lead, said it felt amazing to secure the regional title.

“It’s awesome,” Tuttle said. “This is the first time we’ve done this at our school and honestly, with how unusual a year it’s been with the COVID and everything, it’s the highlight of the year — especially for us seniors.”

Irelan was teary-eyed after the game, taking in the moment alongside her teammates.

Owosso outhit Lakewood 8-3 but the Vikings took a 1-0 lead in the bottom of the sixth when Claire Benham powered a solo homer to straightaway center field with one out.

The Trojans needed to get something going in the top of the seventh. Lead-off hitter Jamie Maier powered a low line drive to center that was speared for an out. Emily Pumford then struck out for the Trojans’ second out. Kendall Anderson hit a towering pop up near the pitcher’s mound but three Vikings converged and the ball dropped. Anderson raced to second and eventually stole third base.

That set up Ginger’s heroics as she lined a single to left.

Lakewood loaded the bases with no outs in the ninth but Irelan was up to the challenge, striking out the three consecutive Vikings to give the Trojans a boost heading into the 10th.

“I just knew that we had to get down to business,” Irelan said. “The game was on the line and we just had to get these outs.”

The Trojans rode the momentum to a regional championship. Reese Thayer’s grounder to third base was mishandled for an error. Then Madyson Rainey powered a double to right center and Irelan was intentionally walked.

Tuttle’s two-run single up the middle made it 3-1 Owosso.

Maier singled to make it 4-1 and Karley Kincaid laid down a sacrifice bunt to plate another run. Anderson laced a single to make it a 6-1 game.

Lakewood managed two baserunners in the 10th, but Irelan shut the door, striking out three viking to secure the regional championship.

Owosso opened the day with a 12-0 mercy-rule victory over Haslett in five innings. Irelan pitched a one-hitter with 12 strikeouts and one walk in the opener.

Tuttle went 3-for-3 with a double and four RBIs in the mercy-rule victory. Rainey, Irelan and Sydney Somers each added two hits. Irelan doubled and drove in two runs while Lexi Hemker also doubled.