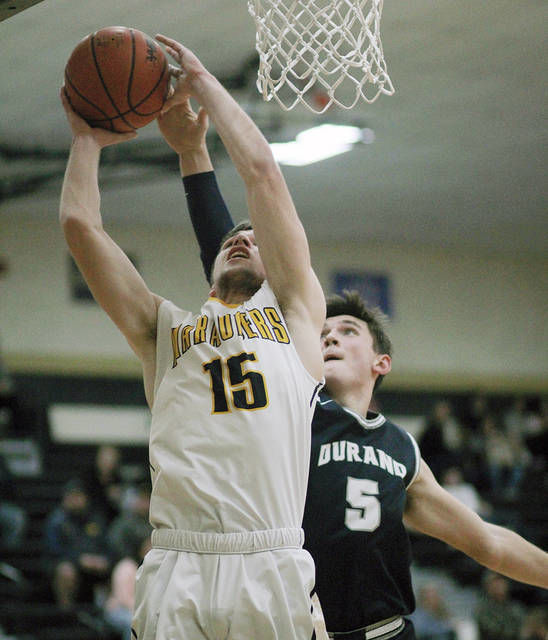 OVID-ELSIE senior Justin Moore, left, goes up for a second-half shot as Durand’s Kyle Winslow defends Monday during a Division 2 district game at Corunna. The MHSAA suspended all winter postseason tournaments due to concerns over the COVID-19 virus. 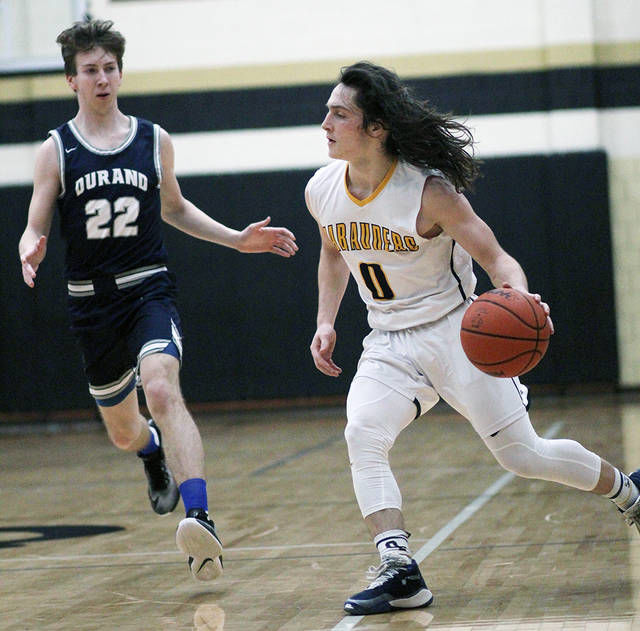 OVID-ELSIE senior Shayne Loynes, right, dribbles downcourt Monday in the second half as Durand’s Conner LaFave looks on at left. 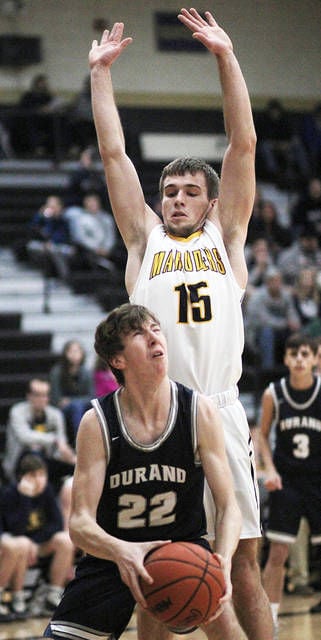 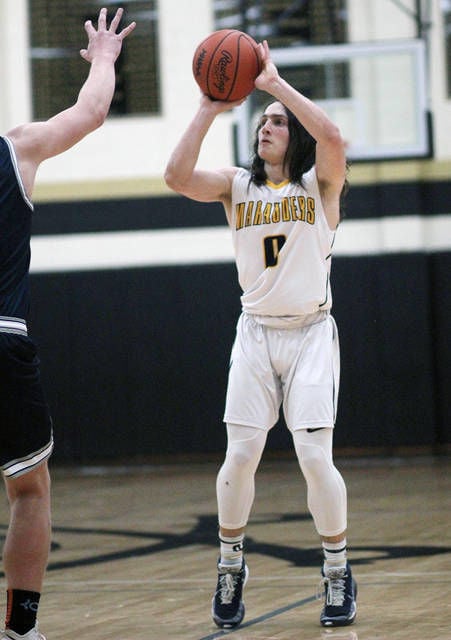 SHAYNE LOYNES of Ovid-Elsie attempts a 3-pointer Monday in the second half against Durand during a Division 2 first-round district game at Corunna. 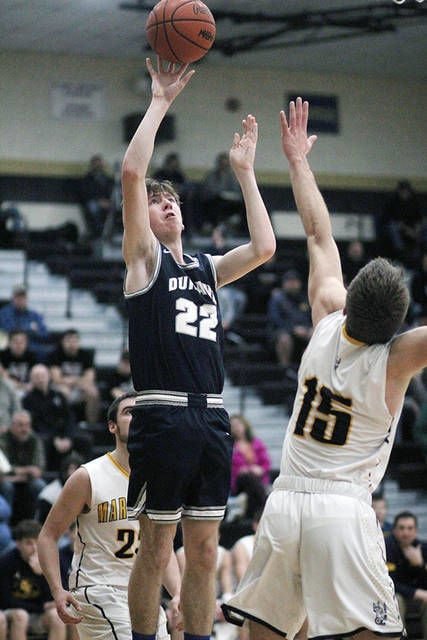 OVID-ELSIE senior Justin Moore, left, goes up for a second-half shot as Durand’s Kyle Winslow defends Monday during a Division 2 district game at Corunna. The MHSAA suspended all winter postseason tournaments due to concerns over the COVID-19 virus.

OVID-ELSIE senior Shayne Loynes, right, dribbles downcourt Monday in the second half as Durand’s Conner LaFave looks on at left.

SHAYNE LOYNES of Ovid-Elsie attempts a 3-pointer Monday in the second half against Durand during a Division 2 first-round district game at Corunna.

CORUNNA — Ovid-Elsie had a 9-0 lead in Monday’s Division 2 district opener before the crowd had a chance to settle in its seats.

Shayne Loynes, Aaron Hurst and Cal Byrnes hit 3-pointers in the first 90 seconds and Ovid-Elsie rolled to a 60-35 first-round victory over Durand.

Durand had won seven of its last eight games entering the contest, but had no early answer for Ovid-Elsie’s outside shooting or rebounding prowess.

“Durand has been playing really well and we knew we had to set the tone early to put a little seed of doubt in their mind and give us confidence,” Ovid-Elsie coach Josh Latz said. “And I thought we did that. Sometimes we talk about not settling for 3-pointers. But the way (Durand) packed it in, especially early on to take away Justin and Jackson (Thornton) inside, we had to make a couple early.”

The Marauders (19-2) earned a district semifinal matchup against Corunna (7-13) Wednesday at 5:30 p.m. Perry and Owosso will play in the other semifinal after the Ramblers beat Chesaning 56-44 Monday.

Loynes, who buried all five of his 3-pointers in the first half, scored 17 points in the first two quarters and finished with 19 on the night. Justin Moore also scored 19 points, while Loynes added seven assists and seven rebounds.

Ovid-Elsie outrebounded Durand 37-19 and owned a 15-1 advantage in offensive rebounds.

Loynes, who shot 5-for-11 from 3-point range, said the Marauders beat Durand’s zone with their outside shooting.

The Railroaders were led by nine points from senior guard Jaylen Jones and seven from Chandler Cleveland. Cleveland, Kyle WInslow and Conner LaFave all had three rebounds.

But it proved not nearly enough.

After O-E hit seven 3-pointers in the first half, Durand did not allow a 3 in the second half, but Ovid-Elsie was still able to extend the lead to 29 points after three quarters.

“They won 18 games for a reason,” Durand coach Dave Inman said. “They have two big guys and we don’t have even one with (Evan) Egan out (with a foot injury). You try manning them and they really hit the pick and roll hard. And obviously against the zone in the first half, Loynes had five 3s. We tried to take away the post in the first half and they had all of those 3s. We took away the 3s in the second half and they hit the post.”

Even more impressive than the inside-outside combination is Ovid-Elsie’s defense, Inman said.

“They’re a great team and they play such great defense,” Inman said. “It’s not even their offense is what makes them good, it’s their defense that’s great. That’s probably their bread and butter.”

“I think it will be a close game for sure,” Moore said. “It’s on their home court and they’ve had all week to prepare for us.”