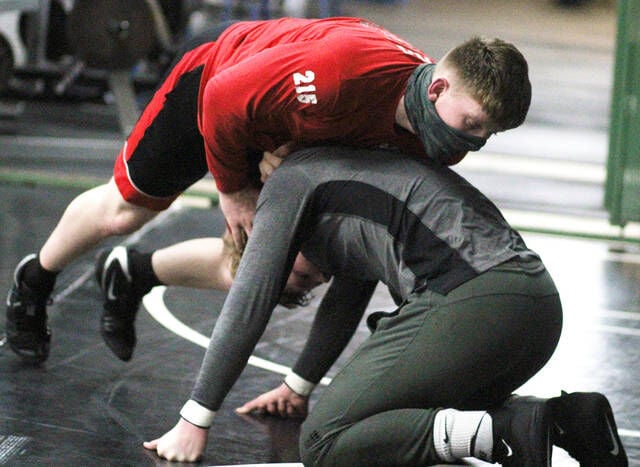 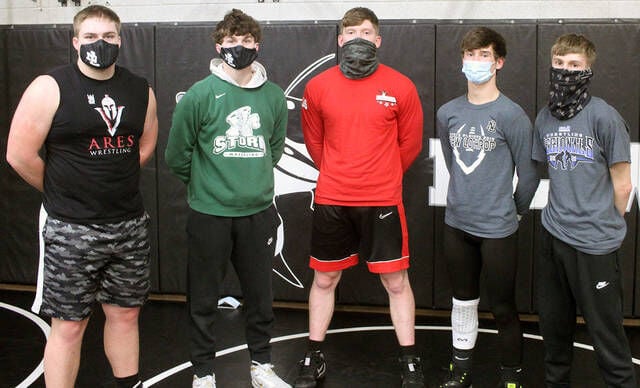 NEW LOTHROP’s wrestling team, which advanced to the Division 4 state semifinals last season, will be counting on several standouts this winter. Among them include, from left to right, junior Isiah Pasik (second in state a year ago), senior Bryce Cheney (state runner-up), senior Cam Orr (state champion), junior Andrew Krupp (state runner-up) and sophomore Daven Lockwood (fifth in state). Not pictured is junior Alex Wolford, who placed fourth in the state.

NEW LOTHROP’s wrestling team, which advanced to the Division 4 state semifinals last season, will be counting on several standouts this winter. Among them include, from left to right, junior Isiah Pasik (second in state a year ago), senior Bryce Cheney (state runner-up), senior Cam Orr (state champion), junior Andrew Krupp (state runner-up) and sophomore Daven Lockwood (fifth in state). Not pictured is junior Alex Wolford, who placed fourth in the state.

A 33-26 loss to eventual state champion Clinton in the Division 4 state semifinals ended that dream, but perhaps New Lothrop — stocked with returning talent that includes five All-Staters — can go all the way in 2021.

Sophomore Daven Lockwood (33-15) is also back after placing fifth in the state at 103.

While COVID-19 has forced wrestling to start several weeks later than normal this season, New Lothrop head coach Jeff Campbell, now in his 20th season, said the goals are high.

“We’re not shying away from what our goal is every year — to win the whole thing,” Campbell said. “That’s what we want to do. Obviously, it’s a challenging year for a lot of reasons. So we’re just embracing the opportunity. We’re thankful we have an opportunity and we want to make the most of it for sure. But we don’t want to do that by tempering our expectations any lower than they would normally be.”

This season will present some new challenges, the biggest, perhaps, is staying healthy during the COVID-19 pandemic. Testing will take place on meet days. Campbell pointed out the New Lothrop football team, which won the Division 7 state football title in January, proved staying healthy is possible.

“We realize there’s going to be some new obstacles in front of us, and there has been,” Campbell said. “The football team certainly showed us you can overcome that.”

Orr — the quarterback/defensive end standout on that state championship team — is seeking his second straight individual wrestling state title and hopes to lead the Hornets to a team crown.

“Everyone is a little rusty right now,” Orr said during a practice session last week. “We’re kind of all trying to get back into the rhythm of things. The team will look good this year. I mean, this is New Lothrop — we reload every year. Obviously the goal every year is to win the state title. We’re going to work hard for it all year.”

“It’s the drive. We worked hard in football for nine months this year and it gives us the work ethic to go out here and wrestle,” Orr said. “Wrestling is the toughest sport in the world.”

Bryce Cheney, who had eight interceptions as a defensive back on the football team, came within five points of a state individual wrestling crown last season.

“The expectations are still at the top of the mountain — obviously winning the state title,” Cheney said. “First, we need to remove all of the rust that we gained during the offseason and then start building our way up to be the best wrestler we can be and hopefully get a good enough line-up to face Hudson or whoever we have in the state finals and eventually come out on top.”

Cheney comes from a successful wrestling family — his father, Todd Cheney, is the head wrestling coach at Hartland and also placed second at state during his high school days.

“My family always takes second at the individual finals and I did last year,” Cheney said. “I want to break the curse and take first this year.”

New Lothrop, having come so close to winning a team state crown last year, will be motivated.

“The way we felt after we lost that match, losing only by six, with a couple of swing matches that caused us to lose, it left more of a sour taste than ever,” Cheney said. “We really want to improve with this team we have this year in order to win it.”

Krupp said a late start to the wrestling season will not deter the Hornets.

“I think everyone’s goal is pretty much the same,” Krupp said. “Our season has been cut short. I think that is just driving everybody to push a little harder in the room and hopefully get back to avenge that loss against Clinton.”

Outlook: Wibert’s team will be led by state qualifiers D’Angelo Campos (lightweights) and Xavier Anderson (middleweights) along with regional qualifiers Aiden Buckley and Zack Worthington (upperweights). “Our team goals, as always, are to try to win a league title and win a district title and make a run at the state meet,” Wibert said.

Outlook: Chesaning will be short on numbers — and minus one state champion after the graduation Jordan Rodriguez — with 16 on the team, but two returning state qualifiers. Wikins was a state qualifier two years ago while Quackenbush was a state qualifier last season. Everett had a solid season with more than 30 wins a year ago and was the Saginaw County champion. “We normally have a pretty good-sized team, but because of COVID, a number of wrestlers decided to opt out this season. We’re still pretty solid,” Reiber said.

Outlook: Holek, a senior, was 45-1, a conference champion last season and a state runner-up last. Hunter Spaulding, a senior, was conference runner-up and regional qualifier last season. Ty Fielder, a sophomore, was a regional qualifier last year and Darrien Alward, a sophomore, was fourth in the conference and a regional qualifier. “We have a good group of freshmen coming in at varsious weight classes with good returning upperclassmen and we’re losing one senior from last year,” Hittle said. “The team looks to be competitive in a league that is one of the best in the state, last year having three teams qualify for team states. As far as predicting where we may finish, I will let the mat decide that.”

Outlook: Laingsburg returns regional qualifiers Aden Baynes, Kyle and Caleb Boettcher and Divine. “We have one of the strongest teams in our recent school history,” Shawn Baynes said. “It is hard to say what our goals will be for this unprecedented season; however, if we get everyone in the correct weight class we can be a very tough team to beat. Our goal will be to make a deep run in the post season and win a conference championship. I believe we have the potential to qualify half our team, if not more, to the individual state finals this year. I also have high hopes that Gabby Motz will win a girls individual state title this year. She placed fourth as a freshman, and third as a sophomore. She is a tough competitor and she will win a lot of matches on the varsity this year. I am very excited for this team.”

Outlook: The outlook is excellent for New Lothrop, which returns several standouts including All-Staters Orr, Cheney, Pasik, Krupp and Wolford. Seniors Harry Helmick (160), Jackson Knieper (145) and Kody Krupp (189) will also be important pieces. “Harry was a state qualifier last year and Jackson and Kody both lost in the blood round at regionals,” Campbell said. Campbell said he also has several other quality wrestlers who are making their way in the lineup.

Outlook: Curran Jacobs, an Owosso grad who went on to wrestle at Michigan State, will succeed long-time Trojan wrestling coach Ryan Clevenger. Jacobs said this year’s team motto is “adaptation” — meaning the team will adapt to whatever comes its way and try and overcome any obstacles on the journey to success. Ott will be the captain of the squad. “He went undefeated last year as a junior varsity wrestler as a heavyweight,” Jacobs said. “He has an outstanding work ethic, leads by example with a positive attitude and gives his best every time he steps on the mat.” Lange and Dewley grew a lot last season, Jacobs said, and he expects good things from them.

Outlook: “We have a small team but we have a lot of experienced wrestlers,” coach Kyle Spiess said. “Talan Parsons enters his freshman year ranked No. 7 in Division 3 at 103 pounds and Max Spiess is ranked No. 12 at 125 pounds. Lots of experience, not enough wrestlers. (We were) plagued by injuries before the season and it will reduce the amount of weight classes we can field. If we were allowed to have a final conference meet we would have some champions and a lot of placers. Overall, as a team we are small so it could prove difficult to win dual meets. The MMAC is one of the toughest conference in the state for wrestling. Four of the eight teams went to states as a team.”

Outlook: The Ramblers will be led by returning seniors Orweller and McConnell along with junior Grooms. Returning wrestlers looking to improve from last year are Konopaska, Vanwormer, Seward, Spiess and McClure.