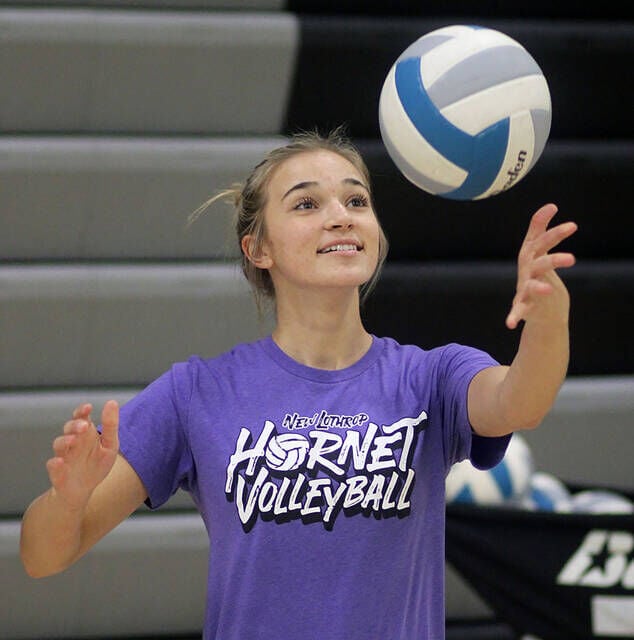 Marissa Rombach, a sophomore middle blocker, is one of seven returning players for the New Lothrop varsity volleyball team for 2021. 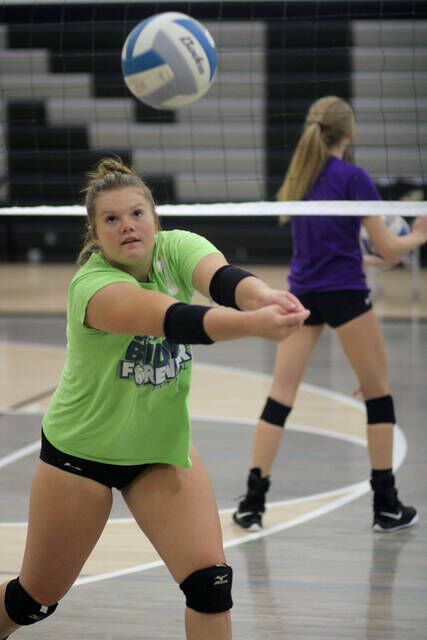 Carley Martin, a junior outside hitter and three-year varsity starter, is one of seven returning players for the New Lothrop varsity volleyball team. Martin led the Hornets in kills, aces and serve reception last season.

Marissa Rombach, a sophomore middle blocker, is one of seven returning players for the New Lothrop varsity volleyball team for 2021.

Carley Martin, a junior outside hitter and three-year varsity starter, is one of seven returning players for the New Lothrop varsity volleyball team. Martin led the Hornets in kills, aces and serve reception last season.

NEW LOTHROP — Last year, New Lothrop was one of the youngest varsity volleyball teams in the state with no seniors on the roster.

The Hornets are still young in 2021 but return seven players off a 16-18 unit that reached the Division 3 district finals and placed second in the Mid-Michigan Activities Conference.

“Obviously we return the same squad from last year — we didn’t have any seniors last year so we have the same team coming back,” Beardslee said. “The girls have big goals for the season. They want a district title first and foremost. We haven’t had that since 2016. These girls think that’s something they can work towards and I think that’s something they can achieve too. They all have the experience and all the time they have put in. And after that, they really want to go after that regional title — something I think is doable. It’s going to take work to get there but something I think is a potential and a possibility for us.”

For New Lothrop it all begins with junior outside hitter Carley Martin. A three-year starter and two-year captain, she was named the team’s Most Valuable Player after leading the team in kills, aces and serve receive. Martin was named an Argus-Press All-Area first-teamer in 2020.

“I’ve improved a lot on my passing and my back row,” Martin said when asked about her game since last year. “And just being smart about the ball — putting it in play rather than try to kill it.”

Martin said that the Hornets do have high aspirations.

Another player to watch for the Hornets is sophomore Marissa Rombach, a middle hitter who registered 163 kills, 44 blocks and 24 aces.

“We plan to finish first in the league this year,” Rombach said. “We’re very excited because we have basically our whole team back except for just a few. And I think we have made some big improvements … Our biggest strength is just probably our ability to pass and find the open spot.”

Another player back is junior libero Madison Wendling, a two-year varsity starter, who ranked second in kills and first in blocks a year ago.

The team has brought up sophomore outside hitter Alexis Birchmeier in 2021.

Outlook: Byron finished 16-7-2 a year ago and 6-1 in the MMAC under Autumn McGuire but have a new head coach in Janice McDowell and a new-look squad. “We are a young team with only a couple of returning players,” McDowell said. “Our goal this season is to play together and grow as a team.”

Outlook: Corunna returns a good nucleus from last season’s 15-7 unit including All-Region player Neele’ge’ Sims, a junior, and Josalyn Stratton, a senior, both big hitters. The Cavaliers have opened the season with a 7-4-3 record. “I look forward to this season and competing with a completely new team,” said Corunna coach Kari Carnell, who has posted a career coaching record of 290-143-34. “We will face challenges and we will work through them together and gain new knowledge and experience.”

Outlook: “Our goals for this year are to work hard and be competitive in conference play and to be in a position to challenge in district play,” Poyer said.

Outlook: Durand returns four key players for 2021. Durand hopes to improve on last season’s district finish in which the Railroaders fell in three sets to Flint Powers in the district quarterfinals.

Outlook: Laingsburg finished fourth in the Central Michigan Athletic Conference a season ago but Strieff and his team hope to content for the league title this time around. “We are excited about the upcoming season,” Strieff said. “We return five starters and believe we can contend for the CMAC league title.”

Outlook: Morrice is the defending GAC Blue champion and registered an 11-4 overall record in 2020. Morrice graduated seven players from last year’s unit but will be keyed by returners Valentine, at outside hitter, and Beem, at setter. “They will control the dynamic of the team,” said head coach Brandy Gutting. Valentine is a defending state high jump champion and is a force at the net. “Payton Gutting and Kenzie Doerner are new to their positions but have adjusted well,” said the coach. “Kaylee (McGowan) is a returning middle and has dominated the net so far this year. She will be a standout. Our key upcoming player is Aubrey Rogers.”

Outlook: Owosso, coming off a sixth-place finish in the Flint Metro League Stars Division, hopes to improve in 2021. The team will be led by junior team captains Kendall Ihm and Brielle Sovis. Ihm, a setter/outside hitter, is in her third season of varsity volleyball and was named to the All-Flint Metro League second team two straight years. Sovis, a returning starting libero, is in her third season as well and was an All-League honorable mention player last season. Peyton Spicer, a sophomore outside hitter, is another team captain who has made significant strides to bookend Ihm. Rees Thayer returns at setter and is a sophomore.

Outlook: Bigelow, a senior outside hitter, returns and will be a player to watch out for. She tagged 133 kills and serving 91 percent for the Ramblers in 2020. Bigelow was a first-team All-GLAC performer.

Outlook: Ovid-Elsie has opened the season with a 2-2 record and will be led by Bancroft and Byrnes in 2021.