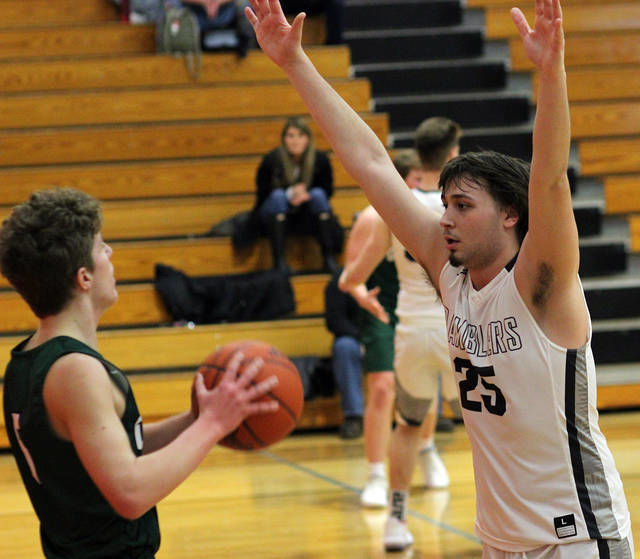 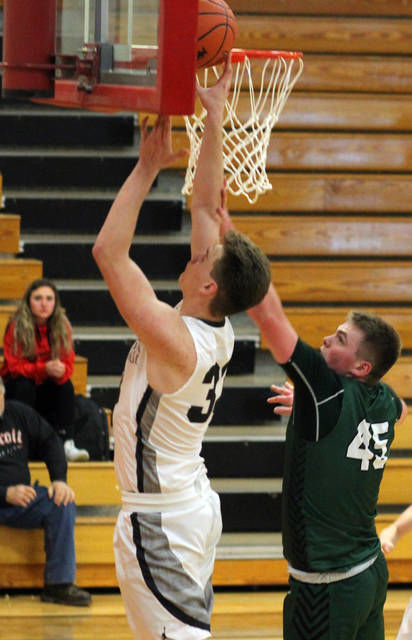 Ramblers' forward Hunter Sanderson (left) goes up for a contested layup in the third quarter. Sanderson finished with four points on the night.

Ramblers' forward Hunter Sanderson (left) goes up for a contested layup in the third quarter. Sanderson finished with four points on the night.

Perry’s offense got hot early on and never looked back. The Ramblers (5-1, 4-0 GLAC) opened the game on a 9-2 run, kick-started by three 3-pointers from forward Caleb Leykauf and guard Brodie Crim.

“We came out fast and that was the biggest thing,” senior forward Hunter Sanderson said. “(Point gaurd C.J. King’s) ability to drive to the basket helped create openings on the perimeter for Caleb and Brodie. That’s really how we got scoring early on.”

The Ramblers continued to roll in the first half both inside and outside as Olivet struggled to find answers at both ends of the court.

“(Olivet) hedged their picks so we knew C.J. would be able to attack them (at the basket),” Ramblers coach Mike Shauver said. “In the second half they weren’t helping off Caleb so we looked to attack that side.”

King finished an assist shy of a triple-double. He settled for a double-double with 10 points, 10 rebounds and nine assists.

While their offense rolled for nearly all the entire game the Rambler defense had a minor setback in the second quarter which allowed Olivet to stick around until after the first half. Shauver made sure the team tightened things up in the second half.

“We gave up a few offensive rebounds and they got a few second chance shots so we wanted to clean that up,” Shauver said. “It really came down to our energy and urgency. We played with more energy and urgency in the second half resulting in better defense which really set the tone. “

Both Shauver and Sanderson were pleased with the win, but acknowledged that there are still improvements that need to be made.

“It was a good win it’ll give us some momentum but we still have work to do,” Sanderson said.