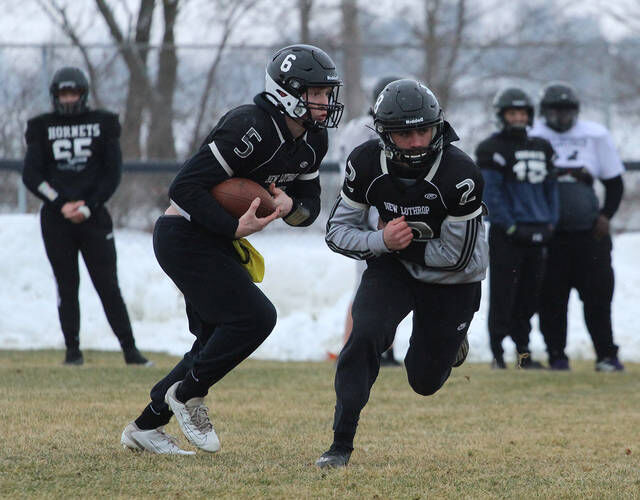 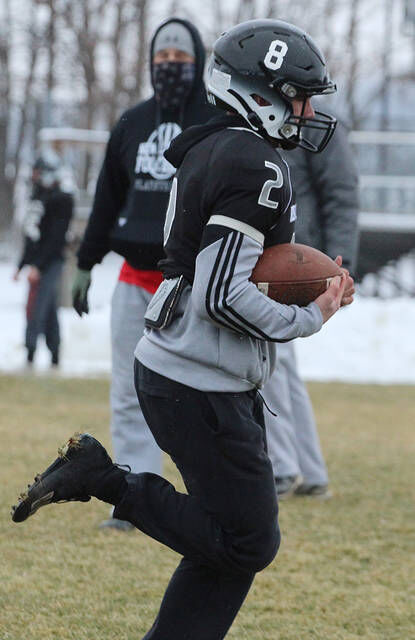 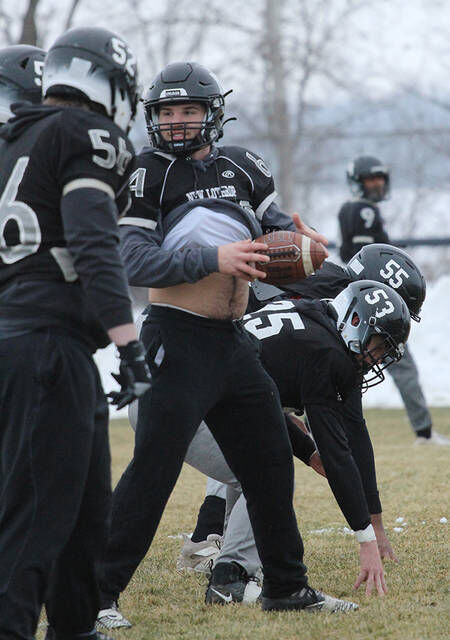 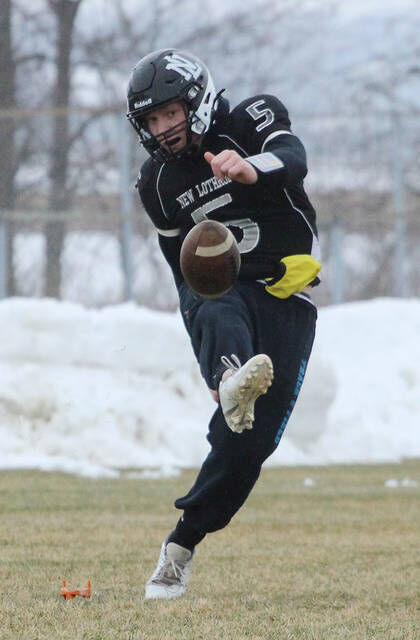 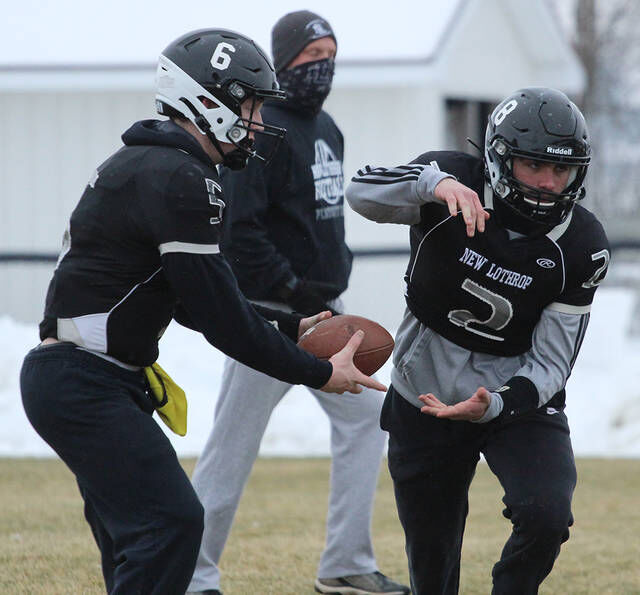 NEW LOTHROP — New Lothrop’s unbeaten football team is trying to figure out how to deal with a standout defensive /offensive tackle known for his size, strength and agility ahead of its regional championship showdown with Detroit Loyola.

The Hornets (8-0) must contend with Derrick Harmon, a Michigan State commit and three-star recruit who has wreaked havoc on opponents throughout the season. Harmon is listed at 6-foot-4 and anywhere from 330 to 360 pounds.

Harmon starts on both sides of the line of scrimmage and is a first-team Associated Press All-Stater in Division 7-8 who has 20 tackles for losses and 14 sacks this season. In Bishop Foley’s 50-8 third-round playoff loss to Loyola, losing coach Brian Barnes was quoted after the game saying, “Harmon, we couldn’t block him all night. We tried to double- and triple-team him but there is a reason he is a Big Ten football player.”

“You’ve got to take him into consideration on every play — where he is at and what he’s doing,” Galvas said. “He’s that good of a player … Not too many teams have had success in blocking him very well. Detroit Catholic Central, which is going to get a good chance maybe of playing for (the Division 1) state title, they played against him and they couldn’t block him.”

New Lothrop has an array of offensive weapons, which starts with Cam Orr at quarterback. Orr, recently named The Argus-Press All-Area Player of the Year, has passed for 1,529 yards and 22 touchdowns with only two interceptions. The senior has completed 76.5 percent of his passes and also rushed for 450 yards and 14 TDs.

Orr said he’ll be aware of where Harmon is.

“He’s a big factor and we definitely have to account for him, but you still have to keep your gameplan and do what you’ve been doing all year,” Orr said. “You can’t just change it up for one player. This is a whole team game.”

One of the New Lothrop players who is expected to go toe-to-toe with Harmon is Hornet senior center Will Taylor (5-10, 205) who is also a second-team All-Stater.

“They are a tough team and they are big all-around,” Taylor said. “It is just going to come down to who wants it more. He (Harmon) is a big kid but you’ve got to take him on. You can’t run away from him.”

Harmon isn’t the only standout that Loyola possesses on defense. The other ringleader for the Bull Dogs are linebacker Myles McFarland, an honorable mention All-Stater.

Loyola, which like New Lothrop runs a spread offense out of the pistol formation, also features standout quarterback Anthony Garrett (6-2, 220), a second-team All-Stater by the Associated Press. Garrett has thrown for more than a thousand yards this season and has three or four talented receivers to throw to, Galvas said.

“Loyola is one of the few teams in our division that can match us speed-wise,” Galvas said. “They’ve got speed and so do we and so that will be an interesting dynamic is those matchups — speed vs. speed and doing our job up front.”

“They don’t run as much, necessarily, option football as they do like a spread style,” Galvas said. “They like to sling the ball around. They have some great athletes to get the ball in their hands. They want their athletes to use their speed and that’s what they want to do. They are huge up front. They’ve done a pretty good job the last two weeks of establishing their run. They have their big kid, obviously, who committed to Michigan State. He anchors their line.”

Garrett passed for 362 yards and five touchdowns in a 39-0 rout of St. Clair Shores LakeShore. He went 21-for-35 in that game. He has also passed for 293 yards against Cranbrook Kingsford and 256 yards against Divine Child.

Galvas said one of the keys to the game will be trying to contain that Loyola offense and minimizing its big plays on a fast field. The field at Madison Heights Bishop Foley’s Venture Park is an artificial turf field installed in 2011.

“If we can contain their big plays than we are going to have a great opportunity,” Galvas said. “It’s going to be, definitely, a battle. They are well-coached, and they are a terrific team. So we’ll see.”

“It’s going to be a really good game,” Orr said. “I do anticipate some high-powered offense. I think if we get a few stops on defense, I think that will get the game going our way.”

The contest will be the first action the teams have seen in nearly two months due to COVID-19 restrictions. The Hornets defeated Bath, 56-12, Nov. 13 in a district championship game at New Lothrop. Loyola defeated Madison Heights Bishop Foley, 50-8, the same night.

The Hornets, ranked No. 3 in the final AP Division 7 state poll, drew a first-round bye to open the playoffs before defeating Bendle 63-16 and Bath. New Lothrop’s closest call came in Week 1, a 35-8 win over Mt. Morris.

The Bull Dogs were ranked No. 9 in the final Associated Press state poll in Division 7. Two of Loyola’s wins were by forfeit (vs. University of Detroit Jesuit in Week 4 and New Haven in the first round of the playoffs).

Loyola’s only win against a team with a winning record was Bishop Foley, but all of Loyola’s opponents have been against much bigger schools in terms of enrollment.

While Harmon is a fine defensive player, New Lothrop has a few of its own.

Orr, New Lothrop’s quarterback who also doubles as a defensive end, was named a first-team All-Stater on the defensive side of the ball. The 6-3, 220-pound senior is also a disrupter with 14 tackles for losses and nine sacks. He also has four forced fumbles.

New Lothrop running back Will Muron has rushed for 548 yards and seven TDs on just 24 carries. He has also caught 15 receptions for another 380 yards and six scores.

Muron, one of the Hornets’ biggest weapons at running back on offense, has also been named an Associated Press first-team All-Stater at defensive back. Muron has 28 tackles, 17 pass break-ups and two interceptions.

Mistakes — particularly turnovers — could be a major deciding outcome in the game, especially since it’s been so long since both teams have played a game.

“Both teams are in the same boat — you know what I mean?” Galvas said. “Like what Will (Taylor) said, a lot of it is just muscle memory in what we do — scheme-wise — and then it’s just trying to get back in physical shape, too.”

As far as the cold-weather practices, Orr said adjusted to it hasn’t been bad.

“I thought we’ve been doing a pretty good job of not worrying about the other stuff but just been playing football,” Orr said. “We’ve had some good practices and we’re going in real confident.”

The MHSAA announced earlier this week that a limited number of fans would be allowed to attend the game, mostly parents of the players.

The winner of Saturday’s game will advance to the state semifinals Jan. 16 against either Jackson Lumen Christi (5-4) or Schoolcraft (8-1), which play at 1 p.m.

New Lothrop, like every other team still in the playoffs, has been tested three times per week for COVID-19 under the newly-adopted pilot rapid testing program.

The Hornets, who began full contact workouts on Monday, were set to be tested again Wednesday.

“It’s three times per week but not on consecutive days,” Galvas said. “It’s gone well and has actually been pretty efficient and there’s been no issues, knock on wood. It’s gone pretty smoothly. We can have 40 people tested and have it done in 30 minutes.”

THE LAST TIME THEY MET

In 2014, Detroit Loyola went 14-0 and won the Division 7 state title. The Bull Dogs faced New Lothrop and defeated the Hornets, 60-26, in the regional finals.

Galvas said, that was a different situation.

“Back in 2014, they were quite a bit different as far as style of play,” Galvas said. “On both sides of the ball. And they had different coaches. But athletically and from a size standpoint, very similar teams. But what’s different is how they use their speed and size.”