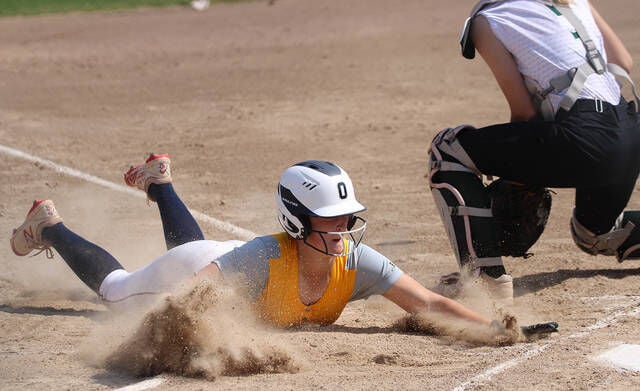 OWOSSO shortstop Jamie Maier, left, slides safely into home during the Trojans’ 25-1 Division 2 district semifinal win over Williamston Saturday at Fowlerville. The No. 5-ranked Trojans (32-3) will be aiming for their first-ever regional championship this Saturday on the same field. 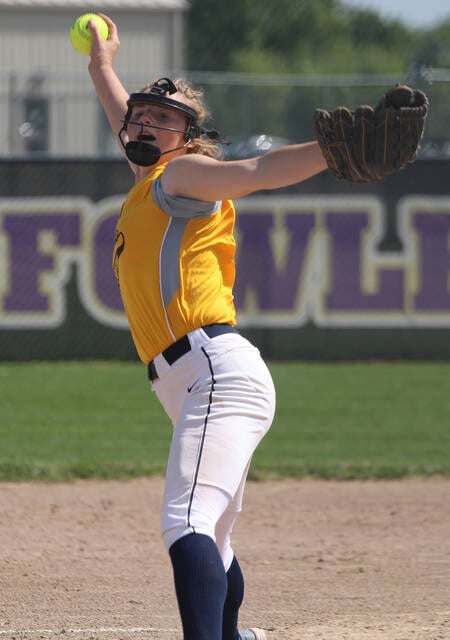 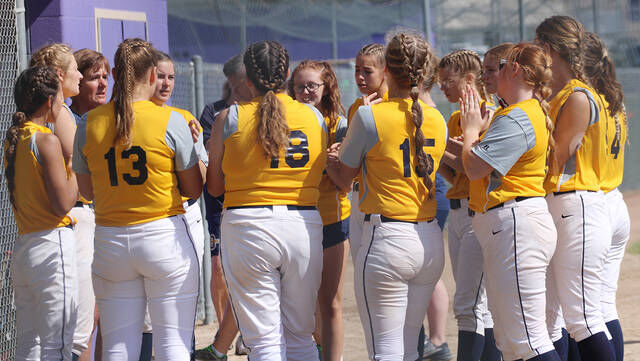 OWOSSO softball coach JoEllen Smith, third from left, talks to her squad before Saturday’s district semifinal vs. Williamston at Fowlerville. Smith, now in her 38th season at Owosso, will be aiming for her first regional title when the 32-3 Trojans compete in this Saturday’s Division 2 regional at Fowlerville.

OWOSSO shortstop Jamie Maier, left, slides safely into home during the Trojans’ 25-1 Division 2 district semifinal win over Williamston Saturday at Fowlerville. The No. 5-ranked Trojans (32-3) will be aiming for their first-ever regional championship this Saturday on the same field.

OWOSSO softball coach JoEllen Smith, third from left, talks to her squad before Saturday’s district semifinal vs. Williamston at Fowlerville. Smith, now in her 38th season at Owosso, will be aiming for her first regional title when the 32-3 Trojans compete in this Saturday’s Division 2 regional at Fowlerville.

OWOSSO — Owosso’s softball team has already piled up the most wins in school history.

The No. 5-ranked Trojans (32-3) will try to parlay that into their first-ever regional championship Saturday, starting at 10 a.m. in the Division 2 regional semifinal against Haslett (21-19) at Fowlerville High School.

Owosso head coach JoEllen Smith said she didn’t know too much about the Vikings this season, but said her team can expect a tough test.

Irelan, a Kent State commit, had more than 400 strikeouts and an ERA of 0.68 entering last week’s district tournament.

Irelan pitched a one-hitter and a three-hitter as the Trojans defeated Williamston 25-1 and Fowlerville 4-1 to win the district crown. Irelan had a combined 20 strikeouts and one walk.

“She’s pitched every inning but one this year for us,” Smith said. “She doesn’t get tired, she wants the ball.”

Irelan also leads Owosso in batting average, hitting over .500 this season. Smith said every bat in her lineup is dangerous.

“It’s one of our strengths,” Smith said. “Reyn Tuttle hit two homers (Wednesday) against Laingsburg and Jamie Maier is always a threat too.”

Owosso smashed 24 hits with three homers in the win over Williamston, with Irelan, Kendall Anderson and Karley Kincaid all hitting home runs.

The other regional semifinal at Fowlerville features Olivet (24-6) battling Lake Odessa Lakewood at noon. The regional championship game is set for 2 p.m.

Olivet began the postseason by defeating No. 1-ranked Jackson Northwest 3-2 in the pre-district round.

“They both have great records (Olivet and Lakewood),” Smith said. “But you just take it one game at a time. We’re playing good ball right now.”

Smith, now in her 38th season as Owosso’s head coach, recently captured her 800th career victory at her alma mater. The team also won the Flint Metro League outright, but Smith’s ultimate goal is to reach the state title game and win it.

“It always has been,” Smith said.

SHEPHERD — Laingsburg and New Lothrop, two area softball powers who mirror each other, will battle head-to-head for survival at Saturday’s Division 3 softball regional semifinal in Shepherd.

Both teams won their repsective leagues and districts, and both have won 30 or more games this season. They also both have relied on big bats to get them where they are now.

New Lothrop coach Tom Birchmeier said he has been impressed by the numbers put up by Laingsburg’s offense this season.

“If you look at their game scores, it’s obvious they have a pretty good offense,” Birchmeier said. “They score a ton of runs. From what I’ve been told, they have a lot of team speed and like to put pressure on the defense running the bases.”

“They’ve won over 30 games so I’m sure they are going to be a very tough opponent,” Cheadle said. “You don’t do that by accident.”

Laingsburg will be led by freshman leadoff hitter Ashley Bila, who is hitting .600 with 86 runs scored. Her junior sister, Michigan State-bound Hailey Bila, is batting .509 and has scored 73 runs while hitting No. 2 in the lineup. Jordan Langdon, Laingsburg’s catcher, is hitting .496 with a team-high 68 RBIs.

“Hitting is one of our strengths, obviously,” Cheadle said. “When we get going, yeah, we’re tough to beat if we can put the ball in play and keep rolling that way.”

Laingsburg pitcher Kailey Cataline is 30-4 on the season with 132 strikeouts. Cataline may not have as many strikeouts as some pitchers, but she has good control, Cheadle said.

“She doesn’t strike out two per inning like some girls do, but we try to play good defense behind her and when she hits her spots, she’s really good,” Cheadle said.

Jersey Hemgesberg has been New Lothrop’s pitching ace this season. She’s 25-4 and with an earned run average of 1.81 and 165 strikeouts.

“In order for us to beat them, we are going to have to limit their offensive opportunities,” Tom Birchmeier said. “Our pitchers need to give them tough pitches to hit and have very few walks. Our defense has been solid all year.”

Do you feel the COVID-19 pandemic is over?