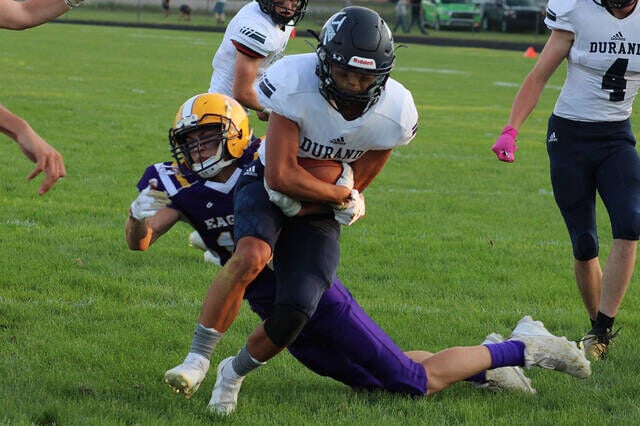 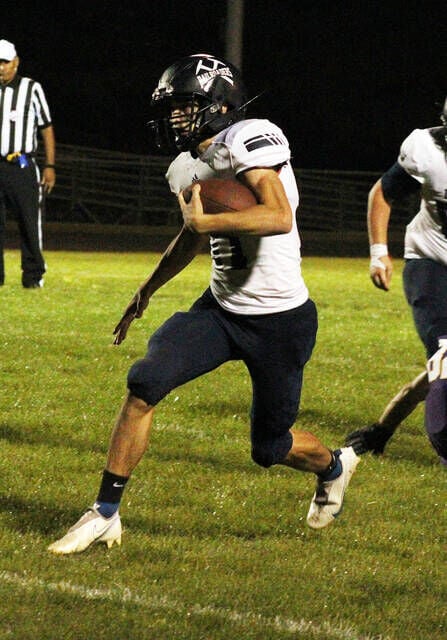 Durand running back Alex Bruni runs for a 29-yard touchdown Friday at Byron. The Railroaders routed the Eagles 53-0. 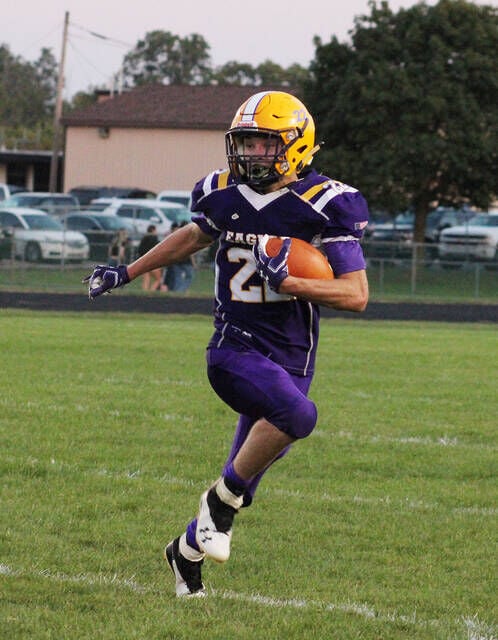 Byron's Caden Aldrich runs the ball Friday against Durand. The Eagles fell to the Railroaders 53-0.

Durand running back Alex Bruni runs for a 29-yard touchdown Friday at Byron. The Railroaders routed the Eagles 53-0.

Byron's Caden Aldrich runs the ball Friday against Durand. The Eagles fell to the Railroaders 53-0.

BYRON — Durand got the last word against rival Byron, steamrolling the Eagles with 382 yards of total offense for a 53-0 statement win Friday.

Carlisle and a host of Byron players spoke candidly about their conference rival in the preseason, with senior running back Troy Bedell going so far as to say, “Beating Durand is a successful year automatically. You can put that right next to my name. That’s from all of us.”

Friday, the Railroaders simply let their play do the talking.

“It’s a rivalry game for us and we were fired up,” Durand first-year head coach John Webb said. “(Byron) came out in the preseason in the paper and talked about how Durand was the team that they were going to beat. … Our guys took that challenge on, they took it personal and you see the scoreboard.”

Durand flexed its collective muscle early and often, setting the tone with strong running by Alward, Lynn and Rawlins in the first quarter. Alward found the end zone to open the scoring with 9:19 left in the first. A fumble recovery on Byron’s opening drive soon followed, setting up Rawlins’ touchdown and second two-point conversion of the night to extend the Railroader lead to 16-0.

Byron struggled to find rhythm in its spread offense, with chunk plays coming few and far between. Quarterback Glen L’Esperance connected with receiver Caden Aldrich to push the Eagles into Railroader territory midway through the first, but a holding penalty two plays later set the Eagles back, with a tipped pass by L’Esperance falling into Lynn’s hands a few plays later to kill the drive.

Durand quarterback Austin Kelley connected with Lynn on a long reception on the next play, with Benford strolling into the end zone untouched a few plays later to make 24-0 Railroaders at the end of the first.

“We ran this (scheme) our JV season,” Lynn said. “We’re all kind of used to it and we all know what we’re doing. Everyone’s really skilled at what they do.”

Lynn picked off his second L’Esperance pass to the keep the train rolling early in the second. Alward powered ahead for his second touchdown a few plays later to extend the lead to 31-0. A 35-yard-field goal by Bruni and a 60-yard touchdown from Lynn rounded out the first half scoring, with the Railroaders entering the locker room with a 41-0 lead.

Bruni weaved through a host of Eagle defenders for a 29-yard touchdown to keep the Railroaders rolling in the third.

Seth Alick stepped in at quarterback to open the second half for Byron, connecting with Aldrich for a huge gain to put the Eagles in the red zone. A mishandled snap and fumble on ensuing plays killed the Eagles’ best chance at scoring, with Durand’s defense forcing a turnover on downs on the opening play of the fourth quarter.

David Martin capped the Railroaders’ scoring with a short touchdown run midway through the fourth.

“We’re building on this, we’re going to stack these wins on top of each other,” Webb said. “We’ve got Mt. Morris next week. They’re a good team, they’ve got a lot of good athletes, but we’re ready to get on a roll.