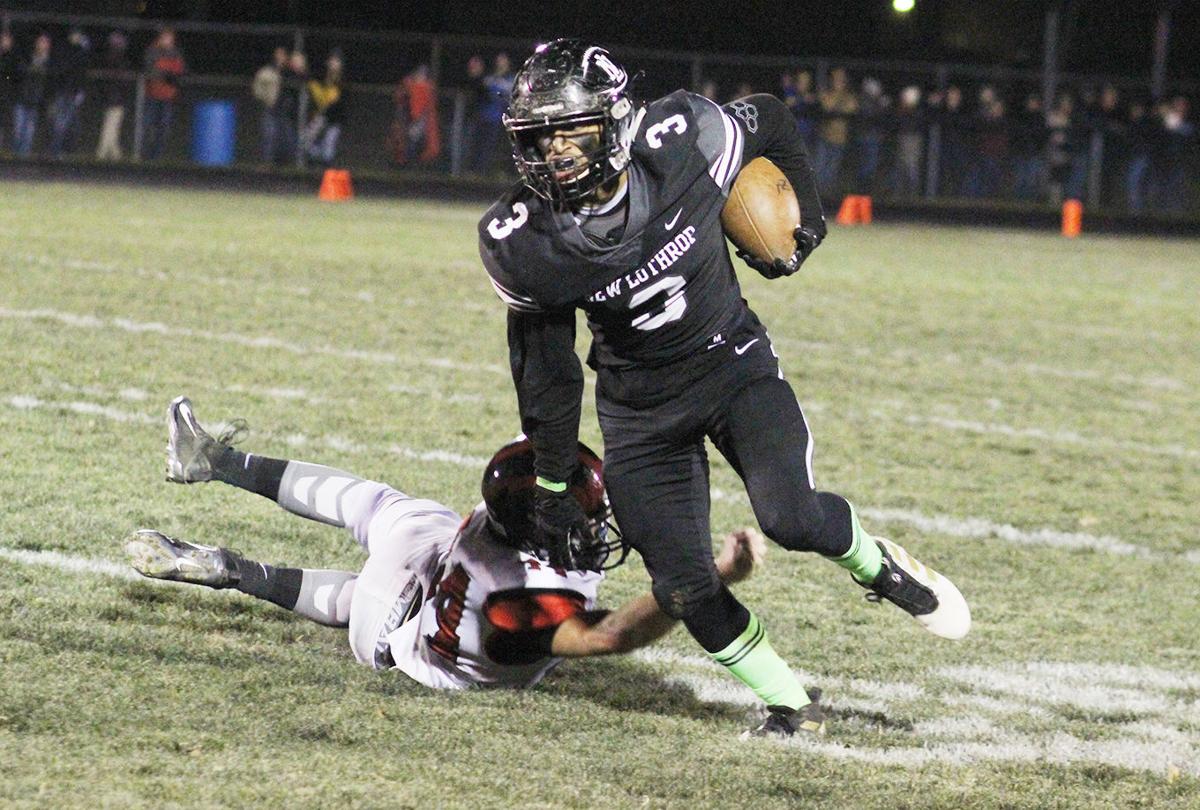 New Lothrop running back Julius Garza sheds a would-be tackler during the first half of a second-round Division 7 playoff game Friday against Beaverton. The Hornets defeated the Beavers 42-7. 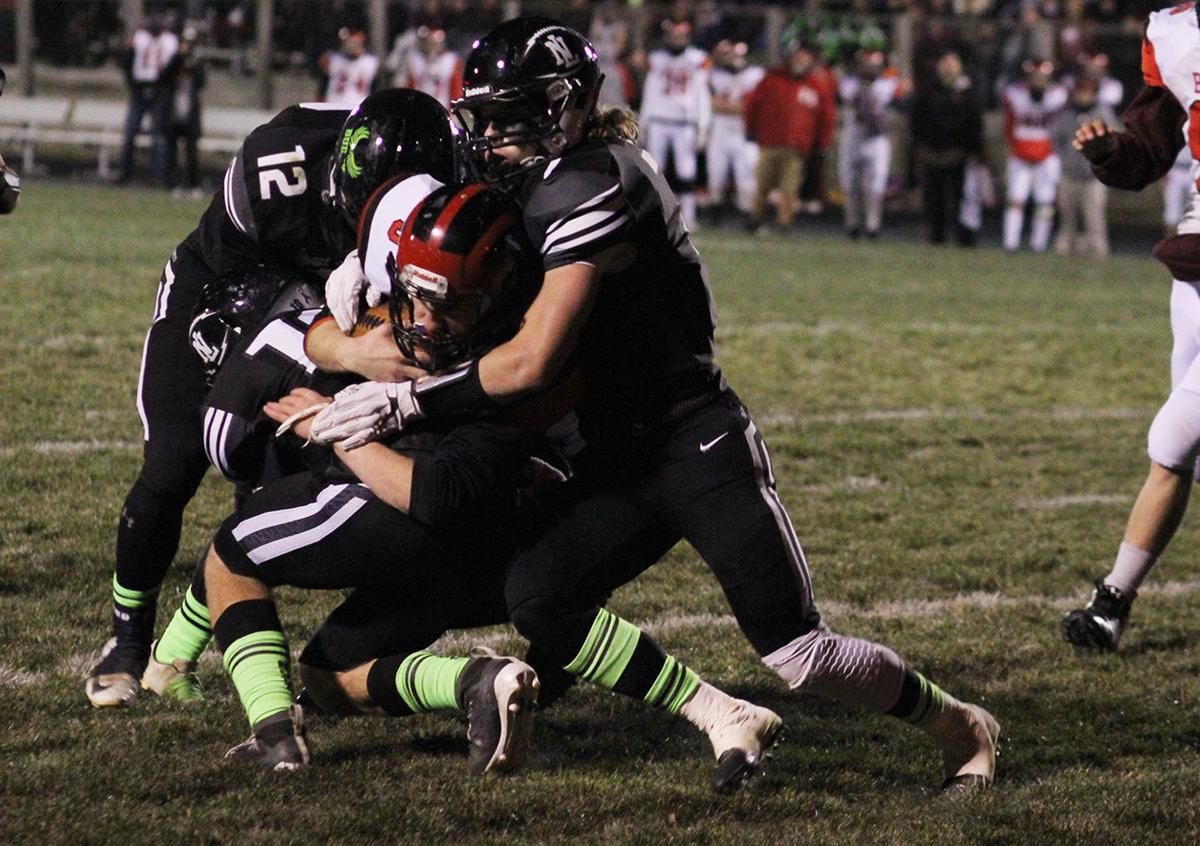 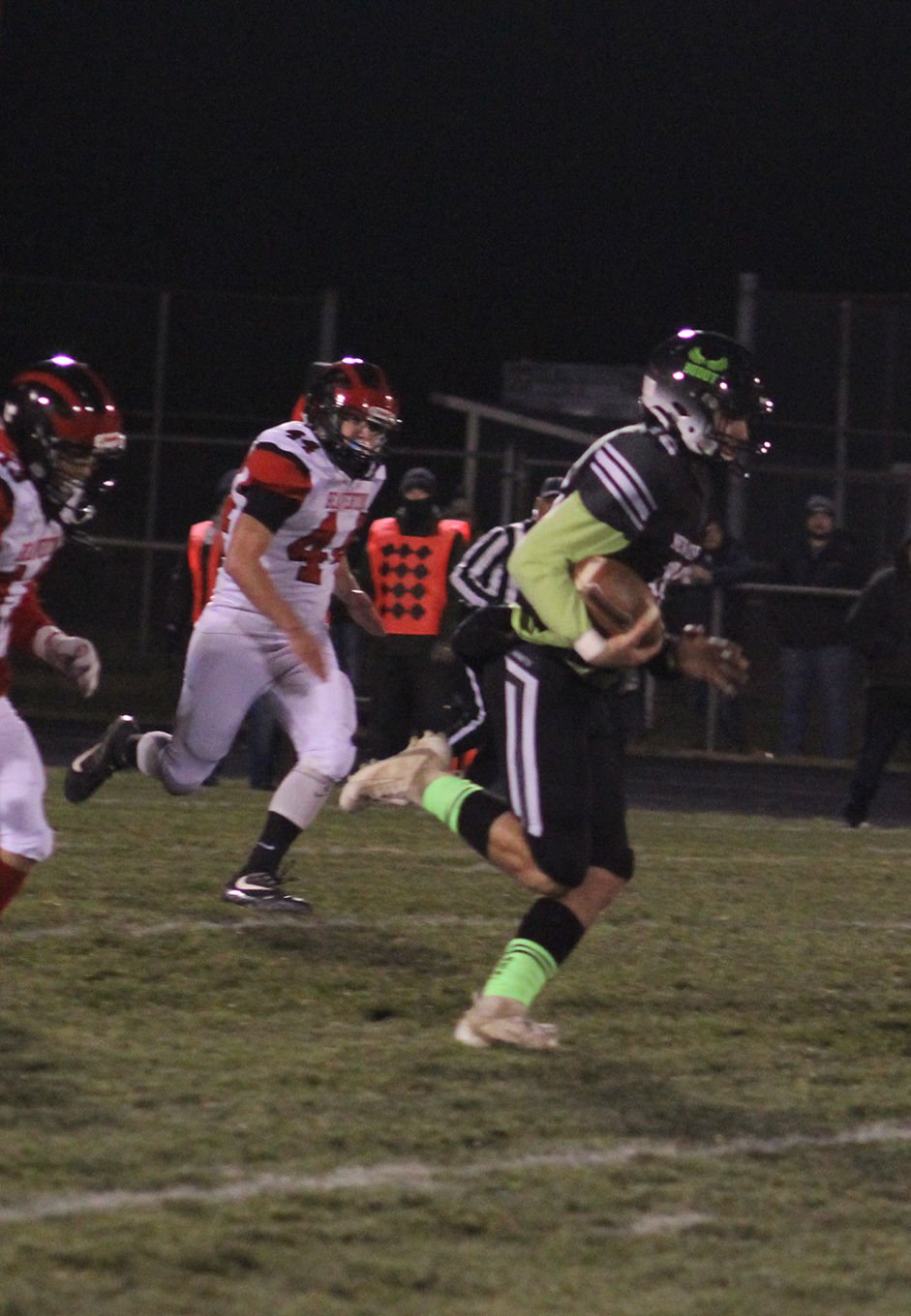 New Lothrop quarterback Avery Moore runs past Beaverton defenders en route to an 80-yard touchdown in the first half Friday.

New Lothrop running back Julius Garza sheds a would-be tackler during the first half of a second-round Division 7 playoff game Friday against Beaverton. The Hornets defeated the Beavers 42-7.

New Lothrop quarterback Avery Moore runs past Beaverton defenders en route to an 80-yard touchdown in the first half Friday.

The Hornets scored on their first offensive snap Friday — an 80-yard run by senior quarterback Avery Moore — en route to a 42-7 victory over Beaverton.

With the win, New Lothrop (11-0) captured the District 2 title. The Hornets will face off against 11-0 Pewamo-Westphalia, who defeated Kent City 41-0 Friday, next week.

“It’s just another step on our journey, but it’s not our ultimate goal,” Galvas said. “It’s great (to win), but we’re over it already and on to the next one.”

Moore, a first-team All-Stater, needed only one half of football to register 313 total yards and five touchdowns — one on the ground and four through the air — as the Hornets headed into halftime with a 42-0 lead over Beaverton.

Moore said he was very pleased with his teammates’ effort throughout the evening.

“I’m very proud of the guys, they played hard right from the get-go,” Moore said. “They went 110 percent and they didn’t stop the whole game.”

The first half scoring began with Moore’s long run on the Hornets’ first play. New Lothrop kept its foot on the gas pedal from there, with a 32-yard touchdown run from Will Muron and a 40-yard touchdown reception from Dylan Shaydik, extending the Hornets’ lead to 21-0 at the end of the first.

Three second-quarter touchdown receptions, from Cam Orr, Julius Garza and Muron, respectively, made it 42-0 heading into the break.

Galvas, who felt his team came out flat in a 47-3 victory over Laingsburg last week, said he was happy to see the Hornets raise their energy level in the first half.

“That was something we kind of focused on, coming out and playing each and every game,” Galvas said. “We came right out of the gates (tonight) and I thought emotionally we were there, our intensity was much better than last week, all around it was a much better effort.”

New Lothrop employed its second-string offensive and defensive personnel throughout the second half against Beaverton, surrendering one lone touchdown to the Beavers on a 37-yard run by Jayvin Balzer with 1:30 remaining in the third quarter.

The Beavers would threaten inside New Lothrop’s 5-yard-line once more late in the fourth quarter, but to no avail.

Despite the victory, Galvas said he and the team are focused on the next challenge. The Pirates (11-0) won state championships in 2016 and 2017 before New Lothrop ousted them in regionals last year.

“We’re going to try and ride that momentum into next week and, you know, we’re just really focused on having the best week of preparation,” Galvas said. “Pewamo is a tremendous team and we’re looking forward to it.”