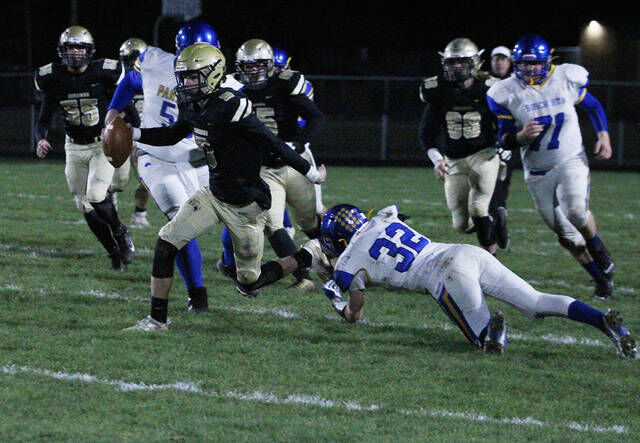 Corunna junior quarterback Jaden Herrick runs for good yardage late in the first half against Birch Run Friday. Herrick tied his own school record by passing for five touchdown passes in a 57-6 rout of the Panthers in a first-round Division 5 playoff game. 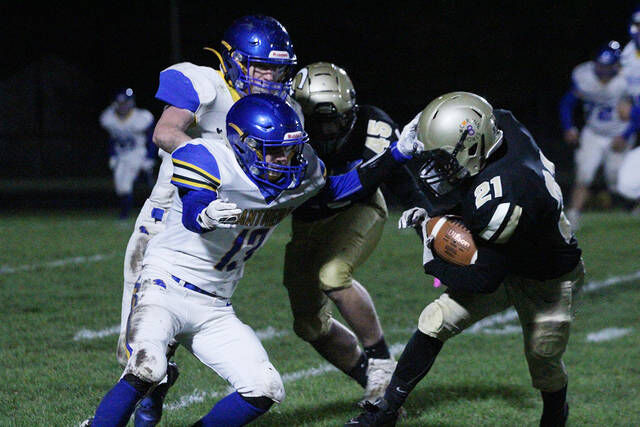 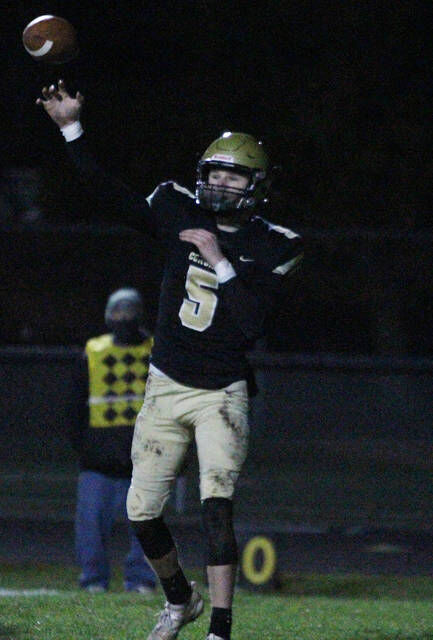 Corunna junior quarterback Jaden Herrick fires a second-half pass Friday during a first-round playoff game vs. Birch Run. Herrick tied his own school record by throwing for five touchdown passes in a game as Corunna routed the Panthers, 57-6. 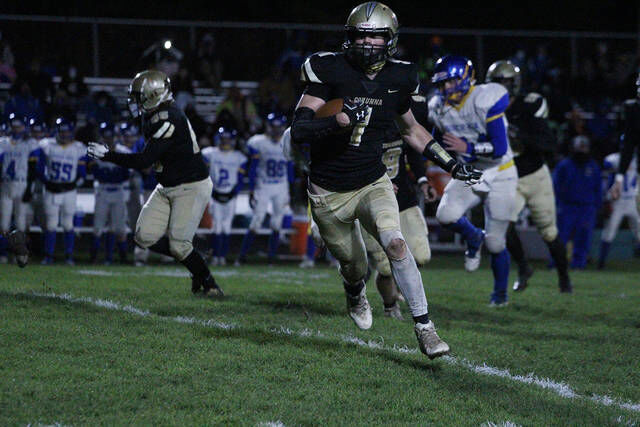 Corunna junior quarterback Jaden Herrick runs for good yardage late in the first half against Birch Run Friday. Herrick tied his own school record by passing for five touchdown passes in a 57-6 rout of the Panthers in a first-round Division 5 playoff game.

Corunna junior quarterback Jaden Herrick fires a second-half pass Friday during a first-round playoff game vs. Birch Run. Herrick tied his own school record by throwing for five touchdown passes in a game as Corunna routed the Panthers, 57-6.

Herrick tossed three of his TD passes to senior slot receiver Nick Steinacker — including a 31-yarder to the right sideline on the final play of the first half. Herrick also connected for TD tosses to Andrew Garrett and Cole Mieske.

Herrick completed 13 of 16 passes for 235 yards and also had a 24-yard scoring run for the first points of the game. He was Corunna’s leading rusher as well, darting for 99 yards on 10 carries.

“Tonight we had another good offensive line performance,” Herrick said. “And then all of the wide receivers did a great job. So I think that’s what brought it altogether.”

Herrick zipped first-half scoring passes of 10, 6 and 31 yards to Steinacker, the 6-foot-7 receiver/ defensive end for the Cavs who is getting Division 1 attention from several schools, including Michigan. Herrick also passed 41 yards down the left sideline to Garrett and found Mieske open for a 6-yard connection with 5 minutes left in the first half.

“Of course Nick is a great player, but I had two other wide receivers out there too tonight — Cole Mieske and Andew Garrett — and they played really well too,” Herrick said.

Herrick previously passed for five touchdowns in a 55-0 victory over Owosso in Week 4. Corunna (4-3) will host Richmond (3-4), a 38-7 winner over Macomb Lutheran North, in a second-round district game Friday.

Birch Run (1-6), after spotting Corunna an 8-0 lead, scored on its first play from scrimmage. Senior quarterback Briggson Cook darted for 65 yards on a draw up the middle; the two-point try failed with 9:41 left in the first quarter.

However, Corunna shut out the Panthers the rest of the way.

“I think it made us mad more than anything,” Zeeman said. “And then we made the adjustments. Then we didn’t allow them to score the rest of the game.”

The Cavs’ built a 24-6 lead after one quarter, as Herrick found Steinacker on a 10-yard rollout pass and then ran in the two-point conversion. Herrick then found Garrett open with Porter Zeeman then running in the two-point try.

Corunna head coach Kyle Robinson said it was another strong performance by his team, which seems to thrive on the atmosphere at Nick Annese Athletic Field. He gave credit to new Corunna defensive coach Sal Ausiello.

“Just like any team, we’re a big momentum energy team,” Robinson said. “And (Ausiello) has done a tremendous job implementing all of the different game plans throughout the year. The very first play they score. We got all kinds of adversity and it’s our job to be able to bounce back and to do our job the way we’re supposed to.”

Corunna added 20 more points in the second quarter, with Herrick finding Steinacker twice and also hooking up with Mieske.

Up 44-6 at halftime, Corunna recovered an onside kick to start the second half. The Cavaliers got two more touchdowns as well. Scout Jones scored on a 7-yard run and Hunter McCorkle, who played quarterback for much of the second half, scored on a 4-yard run.